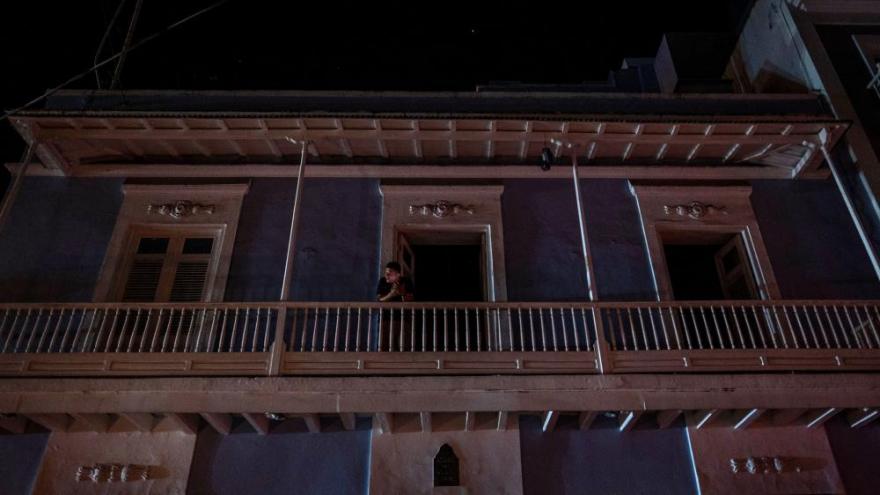 A man stands on a balcony in San Juan, Puerto Rico after a major power outage hit the island on April 6.

(CNN) -- Hundreds of thousands of homes and businesses in Puerto Rico still were without power Saturday, more than two days after the start of an island-wide outage that began with a fire at a power plant.

Power has been restored to more than 1 million of the island's roughly 1.5 million utility customers, the territory's grid operator said early Saturday.

That leaves about 500,000 homes and businesses without power in an outage that closed schools for two days and caused other interruptions for Puerto Rico's 3.2 million residents.

Power grid operator LUMA Energy was unable to commit to a timeline for the restoration of power to every customer, according to an announcement on its website.

"We are continuing to make progress in restoration but due to extensive damage at Costa Sur Substation, we are not in position to provide an estimate of full restoration at this time," the energy provider said.

An unspecified failure led to a fire at the plant outside the town of Guayanilla on the southwest coast around 8:45 p.m. Wednesday, cutting power across Puerto Rico, Kevin Acevedo, vice president of LUMA Energy, has said. Firefighters have since extinguished the flames.

The exact cause wasn't immediately known, the utility has said.

"Every single (piece of) equipment (at the plant's switchyard) needs to be inspected and tested to make sure that when it's back in service, we can restore power for customers reliably and safely," Shay Bahramirad, LUMA Energy's senior vice president of engineering and asset management, told reporters in San Juan on Friday.

The island's courts also were closed because of the outage, though some court services will be available online for urgent matters like mental health and restraining orders, the territory's judicial system said.

All hospitals were operational by Thursday afternoon, whether their power was restored or they were operating via a generator, according to Secretary of the Interior Noelia García Bardales.

Early Thursday, the utility said the "massive island-wide blackout" might have been "caused by a circuit breaker failure" at the Costa Sur plant.

The cause of the fire is being investigated, Acevedo said Thursday morning, adding that the equipment was up to date on maintenance inspections.

Cleanup at the plant is underway, and replacement parts have been identified and ordered, Acevedo said.