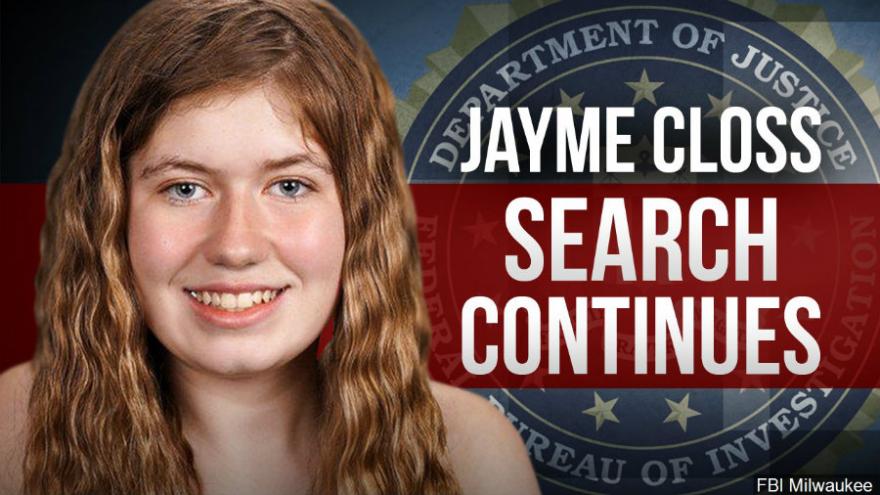 (CNN) -- Wisconsin authorities are urging hunters to be on the lookout for clues related to missing 13-year-old Jayme Closs, whose parents were found fatally shot last month in their home.

"As hunting season opens on Saturday, we ask that hunters report anything suspicious such as clothing, weapons or anything you think it just not right on your property," the Barron County Sheriff's Department said this week in a statement.

The bodies of Jayme's parents, James and Denise Closs, were discovered October 15 after a mysterious 911 call led deputies to their home in northwestern Wisconsin. No one spoke during the call, but the dispatcher heard yelling in the background.

When the dispatcher called back, the call went to Denise Closs' voicemail. Police arrived to find the door kicked in, but Jayme was nowhere to be found, and investigators believe she was abducted and may be in danger.

Thousands of people have joined search parties for Jayme, and the FBI is offering a reward of $25,000 for information on her whereabouts.

Investigators continue to follow up on leads, review recovered video from the area and explore digital evidence, authorities said.

"There is still hope in this department on this case, and the community support and prayers that we have been given continues to fuel our drive and determination to bring Jayme home," the sheriff's office statement said.

A man was charged last month with breaking into Jayme's home and stealing her underwear and other clothing, but he has been cleared of involvement in her disappearance, police said.

Wisconsin investigators saw via motion-activated cameras a man in a skull cap break into the home through a patio door, according to a criminal complaint.

Law enforcement officials responded to a call and set up a perimeter around the home, about 90 miles east of Minneapolis. They ordered the man to come out with his hands up.

The man conceded he had broken into the home and stolen items, the complaint says. In his coat pocket, a sergeant found items, including a small pink tank top and girl's underwear, according to the complaint.

The man faces charges of burglary and felony bail jumping. He'd been released on bond August 11 on another burglary charge, and a condition of the bond was that he commit no other crimes, according to the complaint.