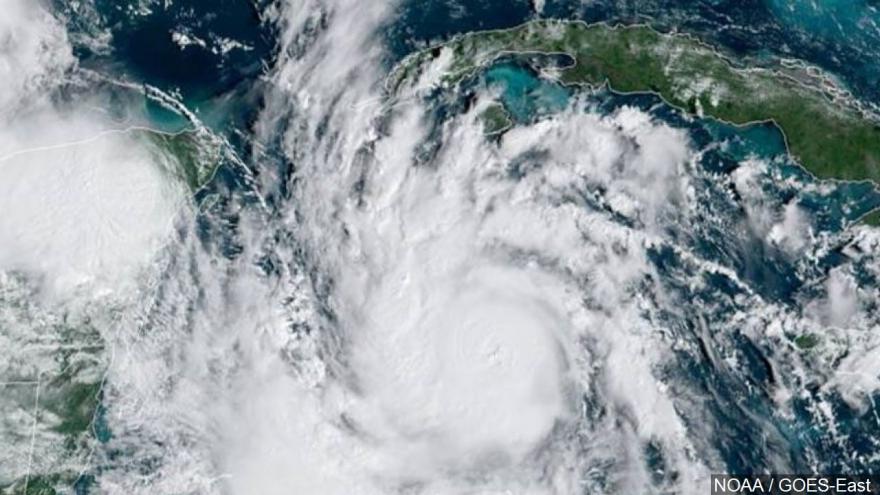 (CNN) -- Hurricane Delta made landfall Wednesday morning roughly halfway between the Mexican resort towns of Cancun and Playa del Carmen in the town of Puerto Morelos, according to the US National Hurricane Center.

Delta has winds of 110 mph, making it a strong Category 2 storm. The hurricane will quickly make its way over the Yucatan Peninsula Wednesday morning and re-emerge in the Gulf of Mexico later today.

Once back over open water, Delta will likely strengthen back into a major hurricane before turning north toward the Louisiana coast. Hurricane watches and storm surge watches will likely be issued later Wednesday along the US Gulf Coast.

The hurricane is expected to bringing dangerous storm surge of 8 to 12 feet to the Yucatan.

People across the peninsula prepared for the storm Tuesday by buying supplies at grocery stories,boarding up buildings with plywood and lining up to fill large jugs with water, video from CNN affiliate TV Azteca showed.

Dozens of tourists who were evacuated from their hotels wore masks and sat chatting while they awaited transport. Others were shown waiting for flights out of the area, with many canceled or delayed due to the storm.

Delta tripled in strength in less than two days

Delta's wind speed tripled in the span of about 30 hours -- growing from a tropical depression with winds of 35 mph Monday morning to a Category 4 storm with winds of 145 mph before weakening. Maximum sustained winds increased by 85 mph in 24 hours -- the most in one day so far this year.

After it crosses the Yucatan Peninsula, Delta will hit the warm waters of the Gulf of Mexico. Forecasters say that will allow Delta to strengthen from a Category 2 to a Category 3 as it approaches the US Gulf Coast.

US states along the Gulf of Mexico are preparing for Delta, with governors in Alabama and Louisiana issuing emergency declarations and evacuations underway in places still recovering from storms earlier in the season.

Evacuations ahead of storm

The Mexican Army's Disaster Support Force was activated to help with evacuations and other storm preparations prior to landfall.

More than 700 military personnel and 47 official vehicles had performed security tours, reviewed tributaries and evacuated people most at risk, it said.

On Tuesday, hotel evacuees moved to makeshift shelters waiting further rides, attempting to get home among canceled and delayed flights.

''We're just trying to get out of here. Our flight was actually tomorrow so we changed it to today to get out of here," Blake Greer of Texas told TV Azteca. "We caught a flight to Mexico City and we're going to fly home tomorrow.''

Along the Gulf Coast, nearly 10% of manned oil rigs have shut down operations ahead of the storm, according to the US Bureau of Safety and Environmental Enforcement, which has activated its Hurricane Response Team. Personnel have been evacuated from at least one rig.

US states prepare for life-threatening conditions

In Louisiana, where evacuees are still living in shelters from Hurricane Laura, voluntary evacuations have already begun in several low-lying areas.

"We are still reeling from Hurricane Laura," Lake Charles Mayor Nic Hunter said in a Facebook post. "Much progress has been made since Laura, but there are still many people going through pain and struggle."

New Orleans-based Entergy is monitoring the storm and preparing to respond in Louisiana. The utility has been busy with restoration efforts following the devastation Hurricane Laura caused to the distribution and transmission infrastructure.

Entergy announced just last week that it had restored power to all accessible customers in hard-hit southwest Louisiana.

Gov. John Bel Edwards declared a state of emergency Tuesday ahead of the storm. He encouraged residents to be prepared for a major hurricane and not focus on its strength.

"Hurricane Delta is an incredibly dangerous storm that will bring heavy winds, rain and life threatening flooding and storm surge to coastal Louisiana," he said.

"Everyone in South Louisiana should pay close attention to the weather in the coming days and heed the advice and directions of their local officials."

The earliest the storm will hit is Friday morning, he said. But if the storm slows, it could be as late as Saturday morning. The whole coastline of Louisiana could see tropical storm winds, Schott said.

New Orleans officials said they would continue monitoring the path of Hurricane Delta "minute by minute" to determine whether evacuations were needed.

Alabama Gov. Kay Ivey also declared a state of emergency Tuesday ahead of the storm to help Alabama begin the preparation process and position the state for a pre-landfall disaster declaration with the Federal Emergency Management Agency.

A mandatory evacuation for tourists at the Alabama Gulf Coast, including Orange Beach, Gulf Shores, Dauphin Island, and unincorporated areas of Ono Island and Fort Morgan, is ordered to begin Wednesday morning.

She said that since the storm is already stronger than Hurricane Sally, which caused widespread destruction to the state when it hit September 16, heavy rains and strong winds are forecast for the area no matter where it makes landfall.

"As residents along the Gulf Coast know all too well, these storms are unpredictable, and I strongly encourage everyone to take Hurricane Delta seriously," Ivey said.

Mississippi has deployed 160,000 sandbags to low-lying counties and has nine shelters on standby to open if needed, the Mississippi Emergency Management agency tweeted Tuesday.

In Texas, Gov. Greg Abbott has placed resources on standby across the state in anticipation of potentially severe weather caused by Hurricane Delta, according to a news release from the governor's office. "Texans are urged to take immediate precautions to protect themselves from the impact of this storm," he said.

Delta is the 25th storm and the second-strongest system to develop in the Atlantic this season. Its top strength was only 5 mph less han Hurricane Laura, which reached wind speeds of 150 mph in August.

It is the strongest Greek alphabet storm in history. The Greek alphabet is used to name storms once the entire hurricane name list is used for a given year -- which has only happened twice, in 2005 and in 2020.

Delta will become the 10th named storm to make landfall in the US this season, setting the record for the most in one year. The season is currently tied with 1916, when nine storms made landfall. It will be the fifth hurricane to make landfall, joining Hanna, Isaias, Laura and Sally. This will be the most storms the US has seen since 2005.

This year continues to be on track for the most named storms in Atlantic Basin history.