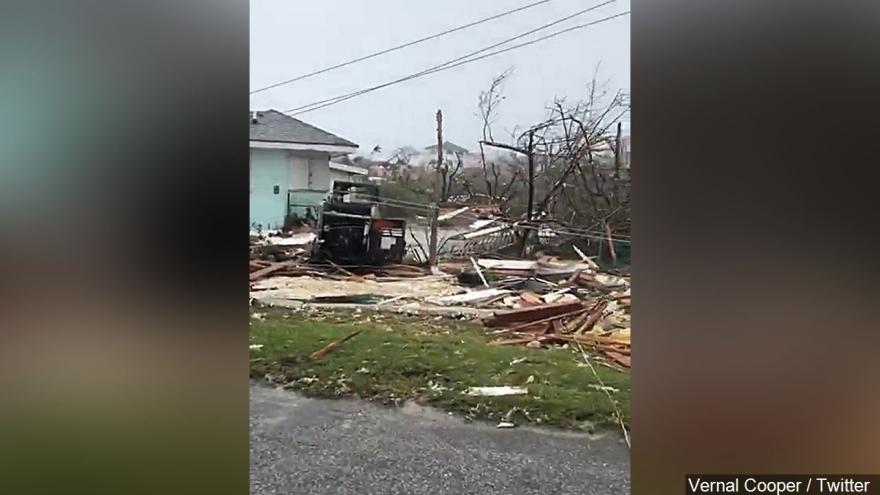 Damages from Hurricane Dorian at Abaco, Bahamas. Taken during the eye of the storm, Photo Date: 9/1/2019
By Holly Yan, Darran Simon and Taylor Barnes, CNN

(CNN) -- Hurricane Dorian, the strongest storm ever to hit the Bahamas, has killed at least five people, destroyed houses and left countless residents homeless. The storm is lingering over the islands, continuing to pound the same devastated places.

Forecasters predict Dorian will move closer to Florida on Tuesday, and millions of Americans are under mandatory evacuation orders.

Dorian made landfall as a Category 5 hurricane on Grand Bahama Island on Sunday night. Now a Category 4, Dorian has been crawling over the islands, and was stationaryas of 8 p.m., according to the National Hurricane Center's latest advisory.

"We are in the midst of a historic tragedy in parts of our northern Bahamas," Bahamian Prime Minister Hubert Minnis said at a news conference in Nassau.

Minnis did not provide more details Monday about the five people killed in the Abaco Islands. A woman earlier told a local news outlet that her 8-year-old grandson drowned in the rising waters.

The storm was 25 miles northeastof Freeport, the main city on Grand Bahama, with maximum sustained winds of 140 mph Monday evening. It is expected to slowly drift westward to northwestward overnight, and is then forecast to turn toward the northwest late Tuesday.

The storm wiped out power to Nassau and the rest of New Providence, the country's most populous island, Bahamas Power and Light said.

"This is a life changing storm. ... It feels like something out of a movie," Chris Pannerman told CNN. "When we were trapped in a bathroom, the whole building was shaking. I was sitting against the wall and I can feel the pressure entering and pushing the wall on my back."

Pannerman, his wife and 3-year-old daughter were stuck in their apartment in Marsh Harbour, a town on Abaco Island. The storm tore off a part of his roof and roofs of other homes and businesses.

He said he saw a people walking in waist-deep water and a house that had flipped over.

Pannerman said he lived through Hurricane Frances, which was a Category 3 storm, in 2004 and Jeanne in 2005.

"I have memories of those storms," he said. "And this is definitely a new memory for me."

Minnis said the initial reports from Abaco suggest "the devastation is unprecedented and extensive."

"The images and videos we are seeing are heartbreaking,"Minnis said. "Many homes, businesses and other buildings have been completely or partially destroyed."

But conditions prevented Coast Guard crews from getting to Grand Bahama Island on Monday, he said.

The Coast Guard said more than 20 cutters were on standby in Key West, Florida ready to respond to the Bahamas and the Caribbean.

"Bahamians across our country and throughout the world are praying for you," Minnis told residents.

Storm expected to get "dangerously close" to Florida

Dorian will keep lashing Grand Bahama Island though Monday night, forecasters said. It could dump a total of 24 to 30 inches of rain on northwestern parts of the Bahamas.

Then it's expected to draw nearer to the southeastern US coast.

The hurricane is forecast to move "dangerously close" to the Florida east coast overnight through Wednesday evening and then close to the Georgia and South Carolina coasts on Wednesday night and Thursday, the National Hurricane Center said.

An 8-year-old boy is reported dead

Bahamian officials said it's difficult to assess the number of casualties in part because conditions are still dire. "It's not safe to go outdoors," Bahamian Foreign Affairs Minister Darren Henfield said. "Power lines are down. Lamp posts are down. Trees are across the street. It is very dangerous to be outdoors."

Ingrid McIntosh told Eyewitness News she believes her 8-year-old grandson drowned in the rising waters. Her 31-year-old daughter found the boy's body, she told the local news outlet. She says her granddaughter is also missing.

"I just saw my grandson about two days ago," McIntosh said. "He told me he loved me. He was going back to Abaco, he turned around and said, 'Grandma, I love you.'"

John Forbes, a resident of Grand Bahama, recorded video of the waters rising in his home. "Tragic flooding, we are stranded!" he wrote on Twitter. He later wrote that he was about to evacuate.

Vickareio Adderely's home in Marsh Harbour is filled with water. One of the rooms is now "gone," and a hole in the roof keeps getting bigger.

"My house sounds like the ocean," Adderely said. "There are three houses adjacent to mine that also lost their roof."

How Dorian could pummel the US

It's still unclear if or where the storm will make landfall after it leave the Bahamas and heads to the US Southeast.

Landfall happens when the center of the hurricane reaches land. Forecast models now show Dorian skirting along Florida's coast Tuesday and then next to Georgia late Tuesday and Wednesday.

But just because the center of the storm might not hit land doesn't mean it won't be destructive. Hurricane-force winds topping 74 mph extend 45 miles out from the storm's center.

The hurricane center said "life-threatening storm surges and dangerous hurricane-force winds are expected along portions of the Florida east coast through mid-week."

The governors of Florida, Georgia and South Carolina ordered mandatory evacuations for some coastal residents.

More 2,700 US flights scheduled for Monday and Tuesday were canceled, ccording to data from Flightaware.com.

SeaWorld Orlando announced the attraction would be closed on Tuesday because of the storm.

Even places as far north as North Carolina are potential targets for a US landfall, forecasters said.

In Wilmington, North Carolina, Christina Dowe said she bought a new home in November after her home was nearly destroyed by Hurricane Florence.

She said they were trying to get perishable, water and flashlights sot hey are better prepared than they were last year.

Dowe said she's just hoping "everything works out better than it did last year."

Gov. Roy Cooper told residents that preparations made now "could save your life later or lessen the chance that you might need rescue or shelter during the storm."

"Time is running out to get ready," he said.