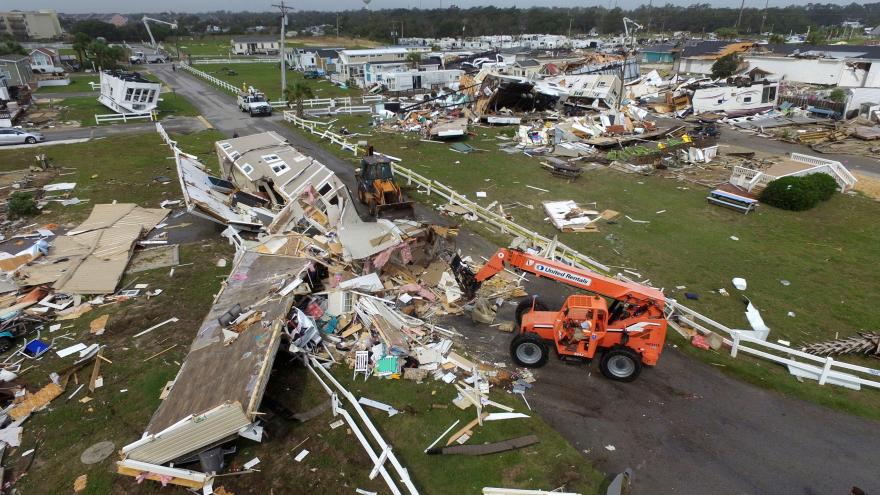 (CNN) -- The center of Hurricane Dorian made landfall at 8:35 a.m. over Cape Hatteras, North Carolina, with maximum sustained winds near 90 mph, according to the National Hurricane Center.

Hurricane Dorian lashed before it lost some of its strength early Friday, Dorian caused flooding in parts of the Carolinas and spawned a number of tornadoes, officials said. More than 370,000 people were left in the dark in South Carolina, North Carolina and Virginia, according to poweroutage.us.

In eastern North Carolina, Dorian is producing wind gusts near hurricane-force. The state is seeing 4 to 8 inches of rain with some local totals of as much as 10 inches, CNN meteorologist Haley Brink said.

It's weaker in strength but not in impact

Earlier in the week, Dorian flattened homes and wiped out neighborhoods in the Bahamas, leaving at least 30 people dead. It then closed in on the southeastern coast of the United States, where five deaths have been blamed on the storm so far.

Though the storm has weakened from a Category 2 into a strong Category 1, Brink said there's not much difference for North Carolina in terms of the impact of strong winds and storm surge.

As of 5 a.m., Dorian was 25 miles east of Cape Lookout, North Carolina, with sustained winds of 90 mph, according to the National Hurricane Center.

"Dorian has North Carolina in its sights," Gov. Roy Cooper said Thursday. "We need people to hunker down and stay safe. We don't need people leaving their homes."

More than 10 million people are under hurricane or tropical storm warnings Friday, which is forecast to be Dorian's last day on the US coast.

A series of watches and warnings

Thursday, nearly two dozen tornadoes were reported from the outer bands of Dorian. They toppled mobile homes and left debris strewn for acres.

Tornadoes are common in the thunderstorm bands of hurricanes and tropical storms.

Tornadoes along the coast

North Carolina resident Byron Cox was in his mobile home in Emerald Isle when the tornado approached. His home was still standing, but his father's was destroyed, he said Thursday.

"All of a sudden I didn't feel it (any) more. I looked outside, and the tornado ... (was) going through the back. ... Debris flying everywhere. Never saw anything like this in my entire life."

The tornadoes extended into South Carolina, where firefighters say one damaged an unspecified number of vehicles and buildings in North Myrtle Beach.

Wayne White captured video of the funnel cloud there. He said he was checking on some properties he manages when he saw it.

"I saw the circular clouds and was going to take a little video, and the funnel came out of nowhere," he tweeted.

"Yes, today was Dorian Day in Charleston, and I am happy to bid him farewell," Mayor John Tecklenburg said Thursday. "To the hundreds of officials, and the outstanding citizens of Charleston, thank you. Tomorrow, we all unite as Team Charleston to recover."