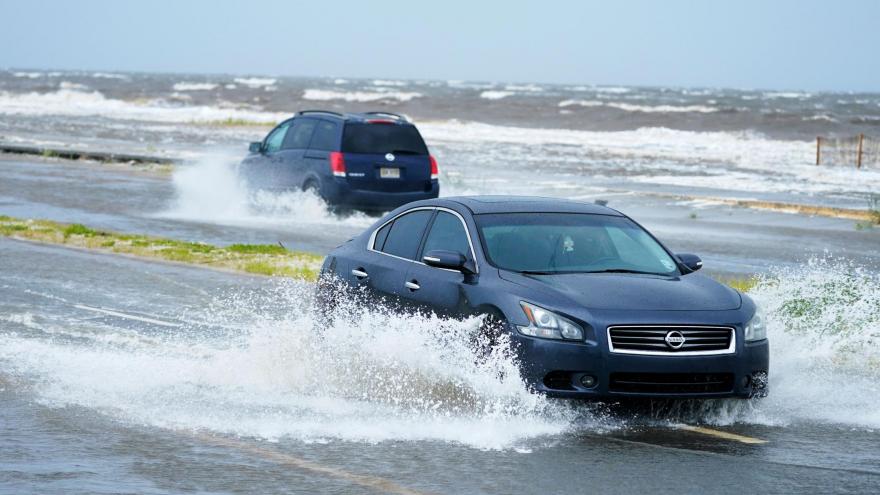 (CNN) -- Hurricane Ida is beginning to move ashore and is set to make landfall early this afternoon likely tied as Louisiana's most powerful storm ever.

The current forecast calls for sustained winds of 150 mph when Ida hits on the 16th anniversary of the historically devastating Hurricane Katrina.

That's just 7 mph below the Category 5 ranking, and if Ida arrives at that level, it would be just the fifth to do so on the US mainland.

Last year's Hurricane Laura and the Last Island Hurricane of 1856 share the current record at 150 mph.

The northern eyewall is moving onshore along the southeast Louisiana coast, according to the 12 p.m. ET update from the National Hurricane Center. The eyewall is the most dangerous part of a hurricane and contains the highest winds.

The center of Ida was around 25 miles from Grand Isle, Louisiana. A wind gust of 104 mph was recently reported at Southwest Pass, Louisiana. Ida will be making landfall around 1 or 2 p.m. ET when the center of the eye is halfway over the coast. Extreme winds and surge will accompany landfall over the next several hours.

Louisiana Gov. John Bel Edwards said Sunday he expects Ida to be "a big challenge for us."

Edwards told CNN's Jake Tapper on "State of the Union" that his state "is as ready as we can be," but he expects Ida to be "a very serious test of our levy systems, especially in our coastal Louisiana."

The state invested significantly in shoring up the levy system after the catastrophic fail after Katrina. Edwards said Ida "will be the most severe test," but he expects the levees to hold. "The next 24, 36 hours are just going to be very, very critical for us here in Louisiana."

Ronald Dufrene, a commercial shrimper, plans to ride out the storm on 100-foot shrimp boat in Jean Lafitte, Louisiana, with his wife. He said he's stayed on his boat for every storm for the last 42 years.

"I rode out three of them last year. Don't get me wrong. This is a buzz saw we have coming," he said. "Mother Nature's a beast.

"I feel it's the safest place for me and my family is on that boat. You get on the highway and you drive 10 to 15 hours in bumper-to-bumper traffic. ... I've got enough food and water for months."

"I did prepare, but you can never be prepared for this magnitude of a storm," Landry,who posted a video on Facebook, told CNN. "I was very surprised at how fast it rose. I've never seen it that high and I'm sure it's higher now at my place."

On Twitter, Wyatt Northrup wrote from Alabama, "Wind and waves really starting to pickup with #Ida in Fort Morgan."

A tornado watch is in effect until 8 p.m. ET for parts of Alabama, Florida, Louisiana and Mississippi, according to the Storm Prediction Center. Quick-moving, brief tornadoes will be possible throughout Sunday.

There is also a danger of life-threatening storm surge Sunday in areas along the coasts of Louisiana, Mississippi and Alabama.

Ida will become the fourth hurricane to slam Louisiana since last August and the state's third major hurricane landfall in that time span.

A Sunday strike would also fall on the 16th anniversary of Hurricane Katrina's Gulf Coast landfall, which led to the deaths of more than 1,800 people in the region.

'We'll be in a much better place' than 16 years ago

Hurricane Katrina made landfall in 2005 as a Category 3 storm with 125 mph sustained winds. Storm surge with Katrina measured up to 24-28 feet, according to the NHC.

The water topped levees and flood walls, and more than 80% of New Orleans flooded. More than 1,500 people in Louisiana died.

Katrina brought storm surge of 15 to 19 feet in eastern New Orleans, St. Bernard Parish, and Plaquemines Parish, while the surge was 10 to 14 feet in western New Orleans along the southern shores of Lake Pontchartrain, according to the NHC.

By comparison, Hurricane Ida is forecast to bring a lower storm surge of 12-16 feet to some areas of southeast Louisiana, the NHC says. And near New Orleans it's expected to be even lower: 8-12 feet outside New Orleans and 5-8 feet along Lake Pontchartrain.

That's because the wind field was larger for Katrina: 90 miles from center at landfall, compared to 50 miles for Ida.

Since Katrina, the levee and water control systems in New Orleans were improved: Pumps were upgraded with backup generators and gates were added at key canals to help block water from entering the city during storm surge.

"This is a different city than it was August 28th 2005, in terms of infrastructure and safety," Ramsey Green, New Orleans deputy chief administrative officer for infrastructure, told reporters Saturday at a News Conference ahead of Hurricane Ida's landfall.

Green called the city's levee system "an unprecedentedly powerful protection for the city," which has three lines of defense: the coast, the wetlands and the levee system.

"From that perspective, we need to be comfortable and we need to know that we'll be in a much better place than we were 16 years ago," Green said. "That said, if we have 10 to 20 inches of rain over an abbreviated period of time, we will see flooding. We don't know at this moment -- we see 15 to 20 inches over 48 hours or less, and we can handle it, depending on the event."

Officials throughout the state have implored people to evacuate, with some issuing mandatory orders to do so.

Arnold urged people to stock up on enough food and water for at least three days.

"We say the first 72 (hours) is on you," Arnold said. "The first three days of this will be difficult for responders to get to you."

The NWS warned of "structural damage to buildings, with many washing away" as well as winds that could bring "widespread power and communication outages."

Airlines canceled all flights arriving to and leaving from Louis Armstrong New Orleans International Airport on Sunday, the airport said.

Tulane University in New Orleans is closed Sunday and Monday, less than a week after students returned to campus.

In Mississippi, at least 15 school districts and universities will be closed Monday, with the majority of schools announcing plans to resume classes on Tuesday, pending the weather forecast.

Nearly 65,000 power outages have been reported across Louisiana, poweroutage.us.

Energy Louisiana said Sunday some of its customers could be without power for weeks.

The company warned that while 90% of customers will likely have their power restored in a timely manner, flooding and storm damage may prevent crews from accessing certain areas.

The company said it expects to deploy around 16,000 restoration personnel once the storm passes.

Mayor LaToya Cantrell announced Friday evening that the National Weather Service and Edwards had indicated there was no time to implement contraflow traffic, meaning New Orleans could not issue a mandatory evacuation for areas inside the levee system.

Contraflow is when authorities use some lanes of traffic for travel in the opposite direction of what was intended so more vehicles can leave an area.

Cantrell on Saturday said that if people planned to voluntarily evacuate -- which she recommended -- it was time to go.

Jefferson Parish Sheriff Joseph Lopinto said Friday that once the storm starts, people need to stay off the roads to protect first responders.

With 2,450 patients in the hospital with Covid-19, Edwards reiterated his concern that Ida is colliding with a fourth wave of infections throughout the state.

"I will tell you it's going to be a very, very challenging storm for our state, and it comes at a very difficult time as well," he said.