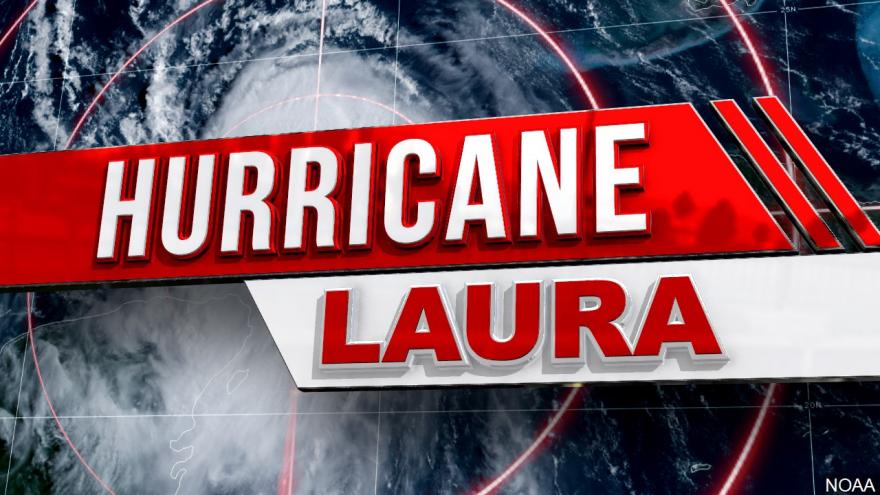 (CNN) -- Hurricane Laura roared across the Louisiana coastline early Thursday as a Category 4 storm, bringing 150-mph winds and devastating destruction that will come into full view as the sun rises.

Laura -- the region's strongest storm in over a century -- made landfallat about 1 a.m. CT as a Category 4 storm with winds of 150 mph. By 5 a.m. CT,the storm had weakened toCategory 2 over west-central Louisiana, with still-powerful maximum sustained winds of 110 mph.

In Lake Charles, buildings shook as the winds howled and screamed through crevices, and people there spoke of torn roofs and toppled vehicles. Water levels along the coast rose rapidly after forecasters warned ofsevere storm surges.

"There will be parts of Lake Charles underwater that no living human being has ever seen before," Louisiana Gov. John Bel Edwards told WWL Radio. "We are marshaling all of our people and assets to go in ... and start a very robust search and rescue effort."

Laura tied with a hurricane from more than 160 years ago for the strongest storm to hit Louisiana. The 1856 hurricane also had winds of 150 mph when it made landfall, CNN meteorologist Brandon Miller said.

More destruction is ahead: The storm's center still is expected to keep hurricane strength into northwestern Louisiana and possibly into southern Arkansas.

Downgraded: Laura weakened to a Category 2 hurricane with maximum sustained winds of 110 mph winds after making landfall and is expected to continue weakening as the storm moves further inland, according to the National Hurricane Center.

Extended storm surge: The storm surge for Laura could spread up to 30 miles inland in southwest Louisiana and Southeast Texas -- reaching all the way to Interstate 10 between Beaumont and Lake Charles.

Power goes out: More than 457,000 customers in Texas and Louisiana were without power early Thursday morning, according to PowerOutages.us.

Crawling out from a barricade to find the roof is gone

Widespread destruction is being reported in and around the Louisiana city of Lake Charles, some 35 miles north of the coast.

Paul Heard left his Lake Charles house just as the storm was pulling part of the roof off around 1 a.m., he said.

He took shelter in his car. As he watched from 25 feet away, he "could see my roof was heaving up and down several inches."

Though he had heard warnings about storm surges, "the damage to my house has been exclusively by wind," Heard told CNN.

Also in Lake Charles, Tolor White Jr. had dozed off while doing a crossword puzzle under a makeshift "barricade" made of a table and some mattresses. He awoke around 1:15 a.m. to a loud noise, he said.

Part of his roof had been torn off. Water dripped into one of his rooms, and wind had blown out some of his windows.

"I slept through most of it," he said.

Mat Mcgee told CNNhe was near the eyewall of Hurricane Laura when he saw the metal building in front of his barge get ripped apart in Hackberry, Louisiana.

The wind pulled off the roof, the door and knocked over the tower on the site.

Even though Laura's center was well inland by dawn Thursday, storm surge still was happening behind it, CNN meteorologist Chad Myers said.

The National Hurricane Center had warned storm surge reaching up to 20 feet could be among Laura's greatest threats, along with winds that have prompted a rare "extreme wind warning" for Lake Charles, Beaumont, Port Arthur and other nearby locations.

The coronavirus pandemic complicated evacuations. Due to safety concerns associated with the Covid-19 outbreak, officials sent evacuees to hotel rooms, said Mike Steele, a spokesman for the state's office of Homeland Security and Emergency Preparedness.

Laura is the seventh named storm to make landfall in the US so far this year, a record for the most to do so before the end of August. There have been four tropical storms and three hurricanes.

Tens of thousands at risk of flooding

Calcasieu Parish, where the city of Lake Charles is located, has about 100,000 residents who are at risk of flooding, parish spokesman Tom Hoefer told CNN.

The focus Thursday will be on saving lives and transporting people to shelters, he said. The Vermilion Parish Sheriff's Office said evacuation was key because authorities are concerned about rescue efforts.

"Those choosing to stay and face this very dangerous storm must understand that rescue efforts cannot and will not begin until after storm and surge has passed and it is safe to do so. Please evacuate, and if you choose to stay and we can't get to you, write your name, address, social security number and next of kin and put it a Ziploc bag in your pocket," the office said in a statement. "Praying that it does not come to this."

In Louisiana's Cameron Parish, about 150 of 6,500 residents have refused to heed a mandatory evacuation order, said Ashley Buller, the parish assistant director of emergency operations.

Sheriff deputies went door-to-door to encourage people to leave, and even the emergency preparedness office evacuated.

Travel trailers were left behind by construction workers on LNG projects. Authorities are concerned about the permanent residents who stayed, Buller said. There have already been reports of water coming up the road.

"We have never experienced anything like this in our history," Buller said. The hurricane is the third major storm to strike Cameron Parish in the last 15 years -- Hurricane Rita and Hurricane Ike were the other two.

She expected Laura to be worse.

"My family has evacuated," Buller said. "They are two and a half hours to the Northeast. I needed them as far away from this as possible."