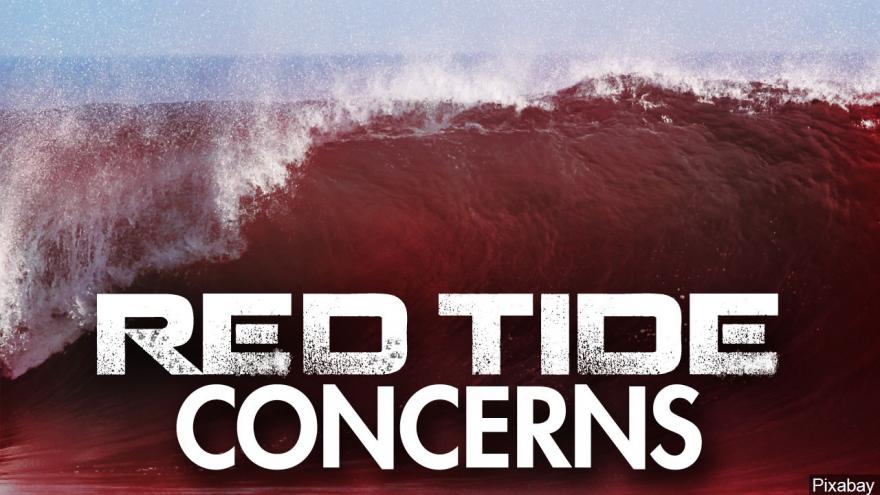 MIAMI BEACH, Fla. (AP) — Hurricane Michael failed to break up a patchy and toxic algae bloom that has lingered in the Gulf of Mexico off Florida's shoreline for the last year, experts said Monday, meaning the red tide outbreak could continue to cause problems in the weeks ahead.

Hurricanes can break up algae blooms, but they also drop fresh water and increase nutrient-rich runoff from land, which can make them worse, said Robert Weisberg, a professor of physical oceanography at the University of South Florida.

Michael blew red tide at the water's surface into shore, but deep ocean currents that have been feeding the bloom since the summer also have persisted, he said.

"The factors that contributed to red tide outweighed the ones that would reduce it," Weisberg said.

The red tide began last October off southwest Florida after Hurricane Irma swept up the state, killing massive numbers of fish, along with scores of sea turtles and the state's beloved manatees.

The bloom also causes respiratory irritations in people which, coupled with the stench of rotting marine life, sent many tourists inland away from the beaches, seaside attractions and restaurants with outdoor seating.

The bloom then seemed to spread up the Gulf coast into Florida's Panhandle over the summer, and finally around the Miami area on the east coast earlier this month.

By late last week, the red tide appeared to have faded along most of Florida's beaches, according to data from the Florida Fish and Wildlife Conservation Commission.

However, the algae was found in high concentrations off some Tampa Bay-area beaches, along with dead fish.

Satellite imagery showed an "anomaly" in the waters off the Panhandle, where Michael made landfall Wednesday, and off the southwest coast, said Tracy Fanara, a program manager for environmental health at Mote Marine Laboratory in Sarasota.

Water samples this week likely will confirm red tide in those areas, she said. Whether fish kills or respiratory problems follow on those shores depends on which way the wind blows.

"On the southwest coast, we didn't get much wind or rain onshore from Michael, but offshore it wasn't enough to dissipate the bloom," she said.

Red tide is caused by an organism called Karenia brevis, which occurs naturally in the waters off Florida. Blooms regularly occur off the state's Gulf coast, but they are rare on Florida's Atlantic side. In an average year, a red tide may bloom in the fall and run its course through the winter months.

The effects of the current bloom have varied from week to week, and not every beach has been hit. But in August, it stretched over 150 miles (240 kilometers) along Florida's Gulf coast, and it appeared to intensify after Tropical Storm Gordon plowed across the Gulf in early September, according to the National Oceanic and Atmospheric Administration.

"Hurricanes in the past have not caused the blooms to dissipate, though the number of cases where blooms and hurricanes occurred at the same time is small so we will be watching to see what effects Hurricane Michael has on the current bloom," NOAA spokesman Jerry Slaff said in an email Monday.