'I am here to help': Medic recounts frantic effort to save victim of fatal Portland shooting 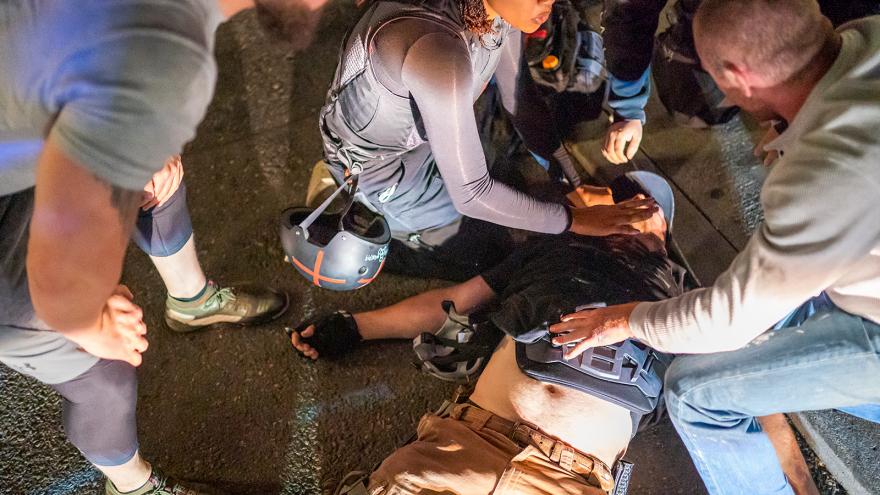 Editor's note: Some images in this article may be disturbing to readers.

(CNN) -- The text message that pinged on Sierra Boyne's phone on May 29 was blunt: "Portland is on fire."

Boyne had watched protests erupt in Minneapolis after George Floyd's killing at the hands of a White police officer. And she felt Portland, ripe with a rich tradition of protest, would soon support the Black Lives Matter movement and take to the streets to denounce police brutality.

"I wanted to know what that (text) means, so I hopped into my car and drove downtown," Boyne told CNN.

When she arrived at the federal courthouse in downtown Portland, the scene was chaotic: car horns blaring, protesters, outfitted with goggles and helmets, emerging from billows of tear gas.It was the first day Portland police had declared a riot -- many such nights would follow.

Trained to provide first aid, Boyne grabbed her medical kit and joined the crowd. She has been part of the protests since day one and serves as a volunteer medic -- a loosely organized group qualified to render first aid but lacking certification as EMTs or medical professionals.

"My entire purpose is the protection of life and safety -- to treat people as best as I can," Boyne said.

Ninety-three days later, a photo would circulate across the country that captures a turning point in the protests: a young Black woman, identified as a medic by a red cross on her bike helmet, kneeling by the body of Aaron J. Danielson, who would die from a gunshot wound moments later. The medic is Boyne.

"I was one of two medics on scene when the man who died last night was shot," she wrote on Twitter on Sunday, August 30. "That man was alive when I left and it will haunt me for the rest of my life that they screamed about having a 'real medic' and none was on scene and that man not but 20 minutes later was confirmed dead."

A statement released by Portland police on August 29 read: "On Saturday, August 29, 2020 at 8:46 p.m., Portland Police officers heard sounds of gunfire from the area of Southeast 3rd Avenue and Southwest Alder Street. They responded and located a victim with a gunshot wound to the chest. Medical responded and determined that the victim was deceased."

On August 31 the Multnomah County Medical Examiner's Office identified Danielson as the victim. Asked for comment, a Portland police spokesperson wrote to CNN in an email: "We have released all that we are authorized to say about that case."

Different paths led Boyne and Danielson to the same street on the night of his death. Danielson had shared a truck with the leader of the far-right group Patriot Prayer earlier that day, CNN affiliate KATU reported, riding into Portland amid a caravan of President Donald Trump supporters.

Boyne, a college student, had started her day on the outskirts of the city, in Clackamas, where the caravan started, in case clashes erupted there. But when the gathering remained relatively peaceful, she and a friend headed to downtown Portland to prepare for altercations between pro-Trump supporters and counter-protesters.

She and another volunteer medic, Michael John Skaggs, had just decided to catch their breath for a moment when they heard gunshots.

"I turned and I saw him drop," Boyne said.

Clutching her first aid kit, she instinctively ran towards Danielson.

"I wasn't thinking about that hat at the time, I was just thinking about him there on the ground," Boyne told CNN. "In that moment, I was completely focused and entirely committed to doing everything in my power to save that man's life."

The man, she would later learn, was 39-year-old Danielson. His hat was emblazoned with a Patriot Prayer insignia.

Boyne says she never saw the suspect, Michael Reinoehl, who was killed Thursday while authorities attempted to apprehend him in Lacey, Washington, on a murder warrant in connection with Danielson's shooting.

Later, after viewing video posted on social media, Boyne realized that the shooter was still right there when she began running toward Danielson.

"On the ground and in that moment, I wasn't scared at all," she said. "I was completely focused on who I now know is Aaron. That was the only thing on my mind."

Video shot by a bystander shows Danielson's friend, Chandler Pappas, forcefully shoving Boyne away at first before yelling at her to help his friend.

"I tried to tell him over and over again, 'I am here to help,'" Boyne said. "I tried to de-escalate because I can't imagine the kind of pain and fear that he was experiencing with his friend lying there."

When Portland police officers arrived at the scene, Boyne says they pushed her away and took over Danielson's care.

Boyne does not know if she could have saved Danielson's life, even if she is well trained to provide immediate care following a gunshot wound.

"We didn't need a trauma surgeon right then," she said. "We needed time until they got there, and I was qualified to provide that, and I was restricted from doing so."

Events in Portland in the last week weigh on Boyne. Two people lost their lives. Danielson's eyes and face are seared in her memory, she says.

"I'm there as a medic," Boyne said. "This incident changed what it means to be a medic down there, because I went through a situation no one else has been in yet -- a person was shot by live gunfire down there."

"We all know now that we have to be more widely prepared for gunshot wounds," she said. "We all need to have more armor and ballistic protection."

Boyne didn't expect protests to endure for so long, but she believes it exemplifies a commitment to the core tenets of the Black Lives Matter movement.

"People don't get tear gassed for fun," she said. "People don't get shot at with rubber bullets for fun, don't amass this collective PTSD for anything less than something worth dying for, which is the civil rights of people who look like me."

Is she satisfied with where things stand after 100 nights of protests in Portland? The question is too simple, she says.

"Often, specifically for Black people, progress is slow," she said. "It is long and it is painful."