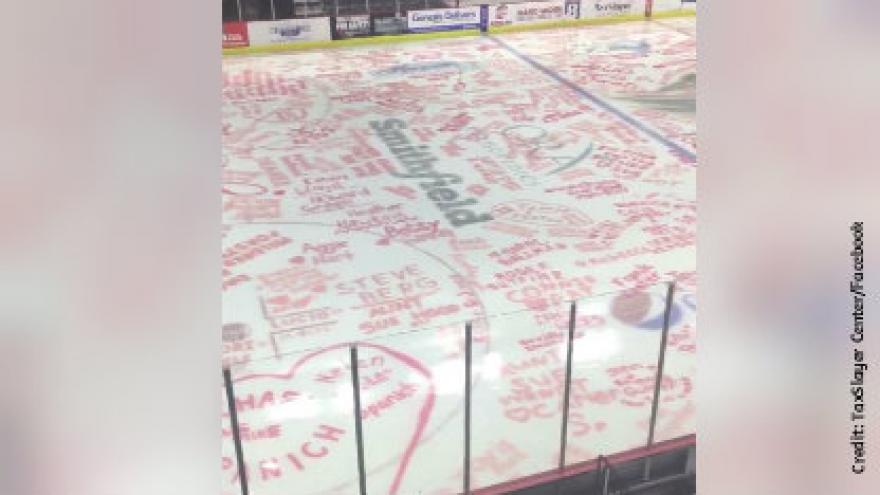 Moline, Illinois (WQAD) -- The ice rink at the TaxSlayer Center turned into a tribute for those affected by cancer.

It's all part of "Pink in the Rink," which is centered around the Quad City Mallards games Friday and Saturday, February 9th and 10th.

In preparation for the awareness weekend, community members were invited to paint names of those who were battling cancer or the names of those they had lost. With pink paint in hand, dozens of Quad Citizens hit the ice to make their mark.

Husband and wife pair Don and Susan Hayes said they were there to honor their parents, who had passed on several years earlier. They looked at the event as a remembrance.

"Unlike so many of the people here, they're gone, we don't have them to fight for," said Susan, "but we work with an organization that holds an auction every year that helps fight to stamp out cancer."

That organization is called the Quad Cities Stamp Club. Each spring donations are made for an auction that raises money for the American Cancer Society. Susan added that the money raised is used locally. Don is a chairman for the group.

Representatives from local cancer organizations were at the event as well. The executive director from the Susan G. Komen Greater Iowa, Jenny Brinkmeyer, said the Mallards reached out to local organizations to spread the word and get more pink names on the rink.

Brinkmeyer said the ultimate goal was to spread awareness and start a conversation. As for the painters, it's a way to show support.

"It's something they can do to support a loved one, support someone that they are in memory of," she said. "It's a nice way to show the rest of the community who their loved ones were and who they're supporting."

Also represented at the event was Susan Herman with the McKay Center for Breast Health at Genesis. The center provides diagnostic procedures and screenings, potentially at no cost, according to Herman. Click here for more information.

"Everyone is touched by cancer, some kind of cancer here or there and it's cathartic for you to come out and write a name down," said Herman. "It kind of bonds us all a little more as a community."

The hockey players will be skating over the names all weekend, which have been protected by an additional layer of ice. The players will hit the ice wearing special edition pink sweaters, according to their Facebook page. The sweaters, presented by Genesis Health System, will be auctioned off on Saturday after the game. Proceeds will go to the Genesis Health Services Foundation.