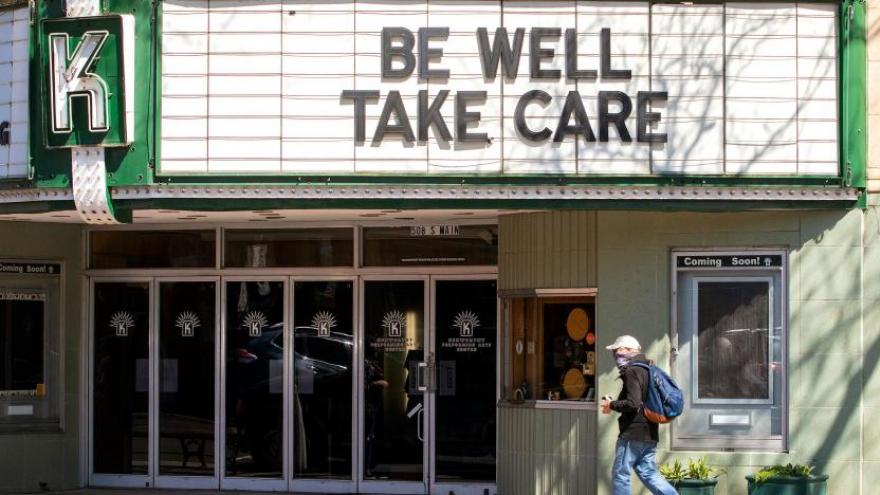 This April 13, 2020, file photo shows a pedestrian wearing a mask passing under the marquee at the Kenworthy Performing Arts Centre during the coronavirus outbreak in Moscow, Idaho. The head of an economic recovery committee formed by Gov. Brad Little to help the state reopen for business while also battling the coronavirus says he's optimistic Idaho will rebound but there's hard work ahead.

(CNN) -- Idaho will pay jobless residents $1,500 to lure them back to work and off federally enhanced unemployment benefits.

The effort mirrors a proposal being floated by Republicans on Capitol Hill, who must soon decide whether to continue supporting the millions of Americans who lost their jobs due to the coronavirus pandemic shutdowns.

Several GOP lawmakers favor return-to-work bonuses such as the one being implemented by Idaho's Republican Gov. Brad Little, while congressional Democrats generally want to extend the $600 weekly boost to benefits passed by Congress in March as part of the $2 trillion coronavirus relief package.

White House economic adviser Larry Kudlow told CNN's Jake Tapper Sunday that the $600 payment, which is on top of state benefits, will expire in late July as scheduled.

"We want people to go back to work," he said. "The President is looking at a reform measure that will still provide some kind of bonus for returning to work."

At issue is the fact that a majority of jobless Americans are now making more on unemployment than they did at work, raising concerns that this imbalance gives people an incentive to remain on the sidelines, which will slow the economic recovery.

Most unemployed Americans will lose their jobless benefits, including the federal boost, if they turn down offers to go back to work. Only those who meet certain criteria for the pandemic unemployment assistance program that Congress created in March may remain eligible. They include people who were advised by a health provider to self-quarantine.

General concern about exposure to coronavirus is typically not a sufficient reason to remain unemployed and continue collecting benefits.

In Idaho, residents will receive a one-time $1,500 cash payment to resume full-time jobs and $750 for part-time positions. Those who lost their jobs starting March 1 and return to work between May 1 and July 1 are eligible, said Alex Adams, the state's Division of Financial Management administrator.

The state is directing $100 million from the $1.25 billion it received in federal coronavirus relief funds to the effort, though some money originally aimed at supporting small businesses may also be available.

The bonuses will be distributed on a first-come, first-served basis and is expected to cover about 70,000 Idahoans. Employers, some of whom told Little that they are having a tough time recruiting employees, will file on behalf of their workers.

Nearly 150,000 Idaho workers filed for first-time unemployment benefits in the 12 weeks since the coronavirus state of emergency was declared in mid-March. The state's unemployment rate jumped to 11.5% in April, up from 2.5% the month before.

The payment is designed to push people to get jobs quickly, said Little, who touted the state's fiscally conservative values.

"We're putting this out as bait to get the economy going," he said at a recent press conference.