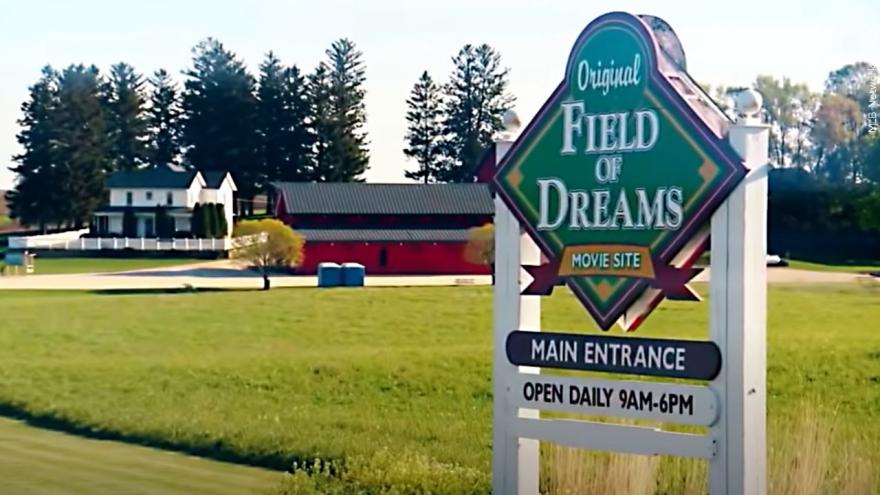 (CNN) -- Nostalgia has never been so expensive.

Baseball celebrates the myth of its rural roots tonight when the New York Yankees meet the Chicago White Sox in a game adjacent to the field in rural Dyersville, Iowa, population 4,000, where the iconic 1989 movie "Field of Dreams" was filmed.

Fans are paying record amounts to attend the game, with most who bought tickets on the secondary market spending more than $1,400 to attend.

The prices are by far the highest average price ever for a regular season game, and have only been topped by a handful of World Series games, such as Game 4 of the 2016 World Series between two championship-starved teams as theCleveland Indians met the Chicago Cubs at Wrigley Field in Chicago. The average ticket price on the resale market that night was a record $3,500 on StubHub and $4,200 according to its rival SeatGeek.

Tickets have a face value of either $375 or $425, and were sold to fans in Iowa and White Sox season ticket holders who won lotteries for the right to buy about 8,000 seats at the temporary stadium in Dyersville, Iowa.

"There are several factors, including the tight supply of tickets available on the resale market," said Chris Layden, spokesperson for SeatGeek. "And every seat is about the same. There's no nosebleed seats. Sometimes you'll see the average price be really high but you can still pay a third of that and get in the door for a cheap seat. But that's not the case this time."

The game was originally planned to be played last year but was canceled because of the shortened, fanless baseball season.

The two teams involved are also adding to demand. The White Sox, whose home is a four-hour drive away from Dyersville, are in first place at this time of the season for the first time since 2012. And their opponent Yankees are one of the best-drawing road teams in baseball year-in and year-out.

"This has a whole life of it's own," said Adam Budelli, head of partnerships and business development at StubHub. "Adding in the fact that it's two marque teams, it's a perfect storm for this event."

Other baseball ticket prices are up too

But it's not just this game drawing higher prices and higher demand for tickets. Attendance comparisons to 2019 are difficult because, for much of the season, there have been restrictions on how many seats most stadiums could sell because of Covid.

But, as is the case with so many items seeing large price increases this year, limited supply and pent-up demand translated into higher resale prices.

SeatGeek says the average price of baseball tickets sold on its site this year has been $81, up 40% from the $58 average in 2019, the last time fans were allowed to attend regular season games. StubHub's figures show a 33% increase for baseball tickets.

Fans are hungry for live events in all the sports, as well as for attending concerts and other events said Budelli.

"People want to get out there, whether it's baseball, concerts, or other live events, they're ready to go back with friends and family," he said.

The movie's celebration of baseball

The site of the movie has attracted a regular but modest stream of fans since the film came out. Attendance is normally free, as fans can play catch or sit in the small wooden bleachers on the original field. Thursday's game is being played on a different field nearby. Given its remote location, the field often has only a handful of fans visiting at any one time, except when buses arrive.

The sky-high prices are a stunning contrast to the prices discussed in the movie.

The film, based on W. P. Kinsella's 1982 novel "Shoeless Joe," is a mythical tale of a farmer, Ray Kinsella, played by Kevin Costner, who builds a baseball field on his farm. A voice he alone hears tells him "If you build it, he will come." He decides the voice is referring to the ghost of Shoeless Joe Jackson, a White Sox great from a century ago who was banned for life from the game when his teammates threw the 1919 World Series. And once he builds the field the ghost of Jackson and other players do arrive to play baseball on the field.

When Costner's character is at risk of losing the farm because of the lost crops he's not growing, his friend and daughter convince him that fans will pay to visit and gain peace from communing with baseball.

"People will come, Ray. They'll come to Iowa for reasons they can't even fathom. They'll arrive at your door as innocent as children, longing for the past," predicts his friend played by James Earl Jones. "Of course, we won't mind if you look around, you'll say. It's only $20 per person. They'll pass over the money without even thinking about it: for it is money they have and peace they lack."

Jones' character's speech that follows is well known to many baseball fans as he explains their love of the game.

"The one constant through all the years, Ray, has been baseball," he said. "America has rolled by like an army of steamrollers. It has been erased like a blackboard, rebuilt and erased again. But baseball has marked the time. This field, this game: it's a part of our past, Ray. It reminds of us of all that once was good and it could be again."