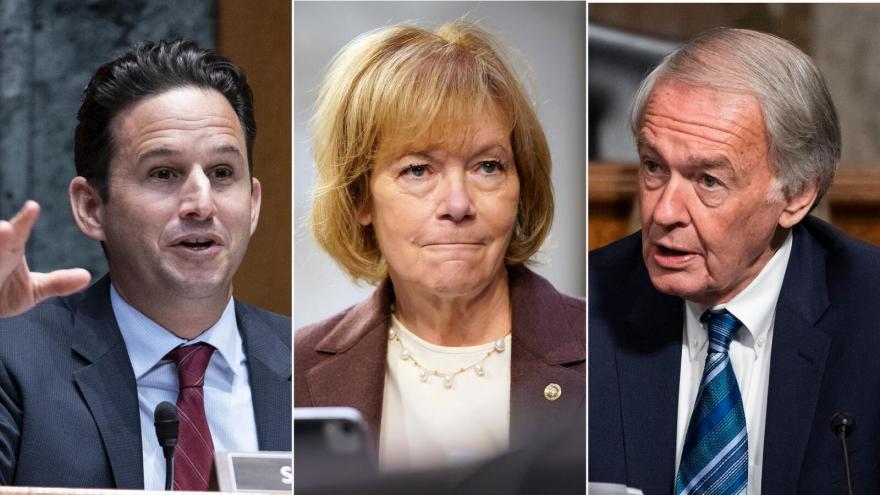 (CNN) -- With Sen. Joe Manchin confirming he's a "no" on President Joe Biden's social spending package, the fate of the bill's $550 bill worth of climate and energy provisions -- and the President's climate agenda -- are now on the line.

In a Sunday statement, the West Virginia senator insisted the clean energy transition is "already well underway" in the US but did not mention the deadly and costly threat climate change poses to Americans. Manchin said that investing billions into clean energy "at a rate that is faster than technology or the markets allow will have catastrophic consequences for the American people" and claimed it would increase reliance on foreign supply chains.

This stunned many of Manchin's Democratic colleagues in Congress, as well as climate advocates in communication with his office. Before going on recess for the holidays, multiple Democratic lawmakers had told CNN the climate and clean energy provisions were some of the most settled with Manchin, compared to thornier issues in the Build Back Better plan such as extending the child tax credit or negotiating over paid family leave.

"I'm kind of speechless," an exasperated Democratic Sen. Tina Smith of Minnesota told CNN on Sunday. "If you want the US to have energy independence, the best way we can do that is by building out clean energy here at home. He's saying no to the policies that would move us in the direction he says he wants to go. It's completely inconsistent and wrong."

"Senator Manchin's statement about the climate provisions in Build Back Better are wrong," Psaki said. "Build Back Better will produce a job-creating clean energy future for this country—including West Virginia."

While Manchin had already left his mark on Democrats' climate provisions months ago by killing the party's clean electricity program -- a proposal championed by Smith -- he seemed supportive of other proposals such as tax credits for clean energy like wind and solar, as well as electric vehicles.

Manchin's remaining issues with the climate provisions included an extra EV tax credit for union-made vehicles. He and Senate Environmental and Public Works Chair Tom Carper of Delaware were continuing to negotiate on a methane fee for oil and gas producers leaking methane above a certain threshold. But up until Sunday, when he sank the entire bill, Manchin publicly and privately had been supportive of the bulk of the climate program: around $320 billion in clean energy and electric vehicle tax credits.

In a statement to CNN, Senate Finance Chairman Ron Wyden pointed out his clean energy tax package was supported by electric utility companies, and that he had sought to incorporate Manchin's concerns about keeping technology neutral tax incentives from the start -- in other words, tax credits that didn't explicitly favor renewables over fossil fuels with carbon capture.

"Senator Manchin has long said he would only support technology neutral incentives and that's exactly what this package is structured around," the Oregon Democrat told CNN in a statement. "Fossil fuels that get cleaner are eligible for incentives, just like solar or wind."

Smith told CNN that Manchin's rhetoric Sunday around the clean energy provisions sounded familiar to her; it resembled what the West Virginia senator had said about the clean electricity program before he told Democrats he couldn't support it in October -- effectively killing it.

"The frustrating thing about this is that — it's hard to negotiate with somebody who seems never interested in getting to yes," Smith said. "Failing to pass Build Back Better condemns us to a world where Americans are paying higher energy costs...and where we utterly fail to seize the moment to address the climate crisis."

What's next for climate provisions

A path forward on the climate provisions -- much like the rest of Build Back Better -- is looking unclear. Multiple senators told CNN on Sunday that it was too early to tell exactly what could happen next, but said they were determined to get climate measures passed through the Senate.

A potential path forward would be passing just the clean energy tax credit provisions through budget reconciliation, or along with a few other provisions that Manchin could support.

"It's just early, but the White House is obviously not going to stop -- failure is not really an option," Collin O'Mara, president and CEO of the National Wildlife Federation, told CNN.

On Sunday, Secretary of Energy Jennifer Granholm -- an administration official deployed to negotiate with Manchin in the past -- tweeted, "This is not over, folks."

"Major climate and clean energy provisions of the Build Back Better Act have largely been negotiated, scored for ten years, and financed," Markey said in a statement. "Let's pass these provisions now. We cannot let this moment pass."

Democratic Sen. Brian Schatz of Hawaii pointed to the urgency of passing climate provisions, as the planet continues to warm from fossil fuel-generated emissions.

"The planet is not going to pause its warming process while we sort our politics out," Schatz said in a statement. "We owe it to future generations to figure out what can pass, and pass it."