Impeach Trump? Most 2020 Democrats tiptoe past the question 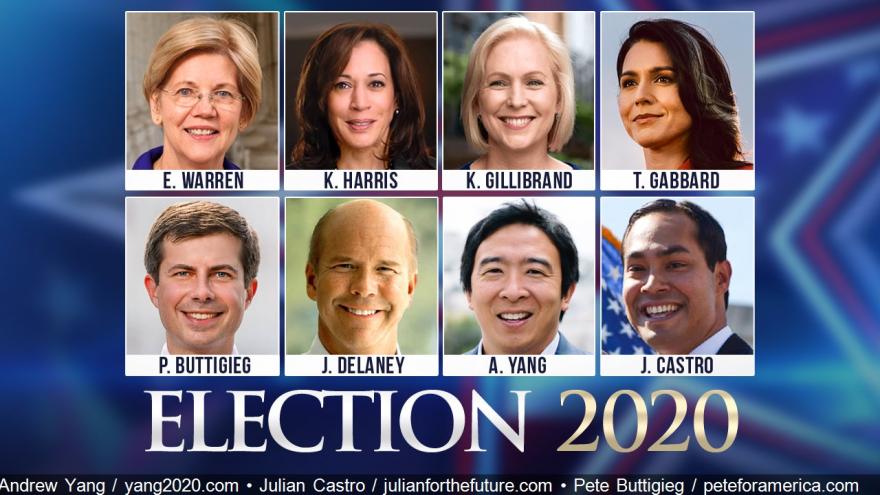 WASHINGTON (AP) — Democratic leaders in Congress have argued that impeaching President Donald Trump is a political mistake as the 2020 election nears. Most of the candidates running to succeed him seem to agree, for now.

Fewer than one-third of the 23 Democrats vying for the nomination are issuing calls to start the impeachment process, citing evidence in special counsel Robert Mueller's report they believe shows Trump obstructed justice . Most others, including leading contenders Joe Biden and Bernie Sanders, have found a way to hedge or search for middle ground, supporting investigations that could lead to impeachment or saying Trump's conduct warrants impeachment but stopping short of any call for such a proceeding.

The candidates' reluctance, even as more congressional Democrats start pushing their leaders in the direction, underscores the risky politics of investigating the president for "high crimes and misdemeanors." Impeachment matters deeply to the party's base but remains unpopular with most Americans.

White House hopefuls may win praise from liberal activists by pressing House Speaker Nancy Pelosi, D-Calif., for an impeachment inquiry, but those who fall short of insisting are unlikely to take heat from early-state primary voters more focused on other issues.

"People talk about it and people have opinions about it, but health care is much more salient to them," Sue Dvorsky, a former head of the Iowa Democratic Party, said in an interview. "I just don't see Democratic activists here all worked up about impeachment. They trust Pelosi."

The 2020 candidates are facing pressure from the left to take a harder line on impeachment as the Trump administration's stiff-arming of subpoenas leaves House Democrats fuming and a growing number of lawmakers urge Pelosi to initiate an inquiry constitutionally required to remove Trump from office. Leah Greenberg, co-founder of the progressive group Indivisible, described the absence of louder calls for impeachment from the candidates as "a real gap in leadership."

Tom Steyer, a California billionaire, has run television ads and held town halls across the country as part of a campaign calling for Trump's impeachment. He suggested that candidates who haven't yet endorsed impeachment "have a political problem telling the truth about this."

Steyer said that if the public saw televised, unfiltered hearings that showed "exactly how bad this president is and exactly who he's surrounded himself with and how corrupt he really is," Democrats and Republicans alike would "reject that kind of behavior." Steyer declined to enter the 2020 presidential race himself.

The administration's blockade of congressional investigations and Mueller's report detailing possible obstruction action have yet to push any new Democratic candidates off the fence.

Former Vice President Joe Biden, the current front-runner, said last month there is "no alternative" but impeachment if the administration keeps stonewalling congressional investigations. But Biden has notably stopped short of urging Pelosi to move forward.

Vermont Sen. Bernie Sanders, who's running second in most polls, told CNN this past week "it may be time to at least begin the process" which could result in impeachment. But he warned in the same interview that Trump could try to exact political gains from any impeachment effort. Pete Buttigieg said last week that Trump "deserves impeachment," but the mayor of South Bend, Indiana, stressed that he would defer to Pelosi on the timing for taking any formal steps.

New Jersey Sen. Cory Booker told The Associated Press on Friday that Trump's refusal to cooperate with Congress amounts to "undermining the Article I branch of the government's ability to conduct its constitutional mandates." But he gave Pelosi wide leeway. He acknowledged that "she's feeling the frustration from Democrats in the House" and said that "should getting cooperation from the administration not work, I know she'll increasingly be considering her options."

Even California Sen. Kamala Harris, who said after the release of Mueller's report last month that "Congress should take the steps towards impeachment," is emphasizing her pessimism that Senate Republicans would act on impeachment if the matter came before them.

Moulton and Swalwell are among four candidates could vote on impeachment, as current House members. Pelosi and other House leaders have signaled clearly that they want to pursue investigations into Trump, including two lawsuits where they scored victories this past week, rather than start a consuming and politically uncertain impeachment process. If the House did vote to impeach Trump, the Constitution requires a two-thirds majority of the Senate to support conviction in order to remove the president from office.

Given the slim likelihood of that, it's no surprise to Democrats outside the nation's capital that impeachment isn't gaining steam among the candidates.

"The people I talk seem to be more interested in what the next president is going to do to make their lives better rather than what they think about impeachment," New Hampshire state Rep. David Morrill said in an interview.