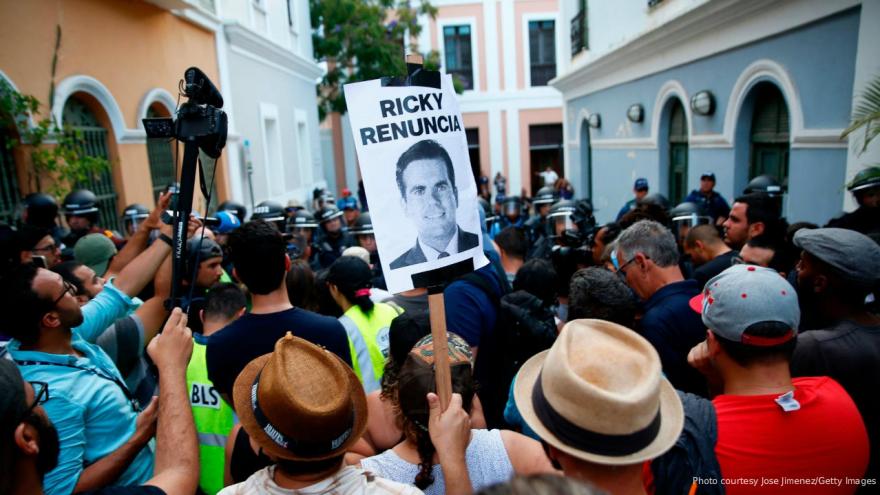 (CNN) -- As thousands of people crowded the streets calling for Gov. Ricardo Rosselló to step down, the president of Puerto Rico's House of Representatives created a special committee on Friday to advise himon whether the governor committed impeachable offenses.

The committee's formation comes after days of protests, sparked in part by the leaks of offensive private chat messages between US territory's governor and his inner circle, while the island has battled high poverty rates, crushing government debt and a painful recovery from 2017's devastating Hurricane Maria.

The impeachment research committee includes three attorneys who will have 10 days to provide a detailed report to Carlos "Johnny" Méndez, according to a news release from the House leader's spokesman, Raúl Colón.

The committee will evaluate the content of leaked messages between Rosselló and Cabinet members and determine if there's proof Rosselló committed a crime, Méndez said.

"We are here to order this evaluation, one that will be transparent and responsible," he said. "I thank this group of lawyers for giving a step forward in this historic moment for Puerto Rico. We will thoroughly evaluate the conclusions of this committee so we can proceed."

The chaos in Puerto Rico follows the Center for Investigative Journalism's publication of nearly 900 pages ofleaked chats from the governor's private Telegram Messenger group in which he and 11 top aides and Cabinet members exchanged profanity-laced, homophobic and misogynistic messages about fellow politicians, members of the media and celebrities. In one, the former chief financial officer appeared to joke about those who died in Maria.

While Rosselló has refused to step down, two Cabinet members who participated in the chats resigned July 13. And on Friday, one of his aides -- press secretary Dennise Peréz -- also stepped down.

In her resignation letter, Peréz lamented that someone had called her corrupt in front of her son.

"While holding my head high and my family close, I thought I could go through anything and continued doing my job professionally, just how I have been for the last 20 years," she said. "Like you are aware, this week, a citizen, without any consideration, called me corrupt and did it in front of my son. This is where I draw the line."

The leak came the same week that two former officials from Rosselló's administration were arrested by the FBI as part of a federal corruption investigation.

'You left us to die'

Thousands of protesters gathered Friday night in the capital of San Juan calling for Rosselló's resignation.

Layzne Alvez told CNN the territory's government had been "left to run wild with our economy, with our money, with all the federal funds the government are sending here." She added that Puerto Ricans weren't a violent people so they did not plan to bring Rosselló down by force.

Protesters have jammed the streets of San Juan over the last several days. Hundreds gathered in front of the Capitol on Wednesday and marched to the governor's mansion, playing tambourines and banging on pots and pans. At times police have fired canisters of tear gas into the crowds.

"Unfortunately, there is always corruption in the government," said Pamela Calderón, the owner of a small restaurant on Calle San Jose. "But with the publication of the chats, people in Puerto Rico saw how the corruption affected the response to the hurricane. There's a sense of, 'You left us to die.'"

"There are still people without electricity or a roof," she added. "There is a perception of being abandoned by the government, a lack of planning, and the inept way government managed the crisis."

The scandal made people snap out of their complacency, a restaurant manager in Old San Juan said.

"We usually wait for things to take their course," Jose Ramos said. "But this will not get resolved without pressure."

Politicians from both sides of the aisleare calling for Rosselló's resignation.

"It's time for the governor to have an orderly transition of government so that this doesn't continue affecting us in DC as it pertains to obtaining federal funds for the island," said Jennifer González, Puerto Rico's resident commissioner in Washington. "The disbursement of funds to the island will obviously suffer dramatically if he remains on the position."

US Rep. Tulsi Gabbard of Hawaii, a 2020 Democratic presidential candidate, has called on Rosselló to resign, and she traveled to Puerto Rico late this week. She was in Old San Juan on Friday night "to stand with the people of Puerto Rico against corruption," she wrote on Facebook.

"I stand with Puerto Ricans demanding change, who have had enough of government corruption, and who deserve a government of, by, and FOR the people. El pueblo unido jamás será vencido. #RickyRenuncia," Gabbard tweeted.

US Sen. Rick Scott of Florida, a Republican, also said in a tweet that Rosselló should step down.

"I've long advocated for the families of Puerto Rico. I've pledged to be their voice in the Senate. While I've been hesitant to weigh in too heavily on the internal political affairs of the island, it's clear that the current leadership has lost the confidence of the people of PR," Scott tweeted. "The island deserves new leadership."

Protesters have been joined by some of Puerto Rico's biggest stars, including reggaeton star Bad Bunny, rapper René Pérez Joglar and singer and actor Ricky Martin, one of the targets of leaked homophobic messages. And similar demonstrations have taken place on the US mainland in cities like Miami and Orlando, Florida.

"I'm so numb from politics in America. But the people of Puerto Rico are numb, and they are waking us all up. I'm going to have their backs," Miranda told CNN.

Puerto Rico's Justice Department has issued summonses for everyone involved in the private chat group. They will be ordered to appear before Justice Department officials to have their phones inspected, department spokeswoman Mariana Cobian said.

Through it all, Rosselló has refused to step down, and on Friday his official Instagram account shared images of the governor at work, as if it were a typical day for his administration.

In a statement posted to Twitter, Rosselló said he would continue to work toward regaining the Puerto Rican people's trust.

"I recognize the challenge that I have before me because of the recent controversies, but I firmly believe that it is possible to restore confidence and that we will be able, after this painful process, to achieve reconciliation," he said.

But the calls for his ouster have yet to die down.

González, the island's resident commissioner, said in a letter to the governor that the protests and scandal have painted "a lawless Puerto Rico for the rest of the world."

"It is time to give stability to Puerto Rico so that we can continue the reconstruction that was planned before the events of the last weeks and return the credibility of the government of Puerto Rico within the Federal Capital, the financial markets, tourism and the whole world," González wrote.