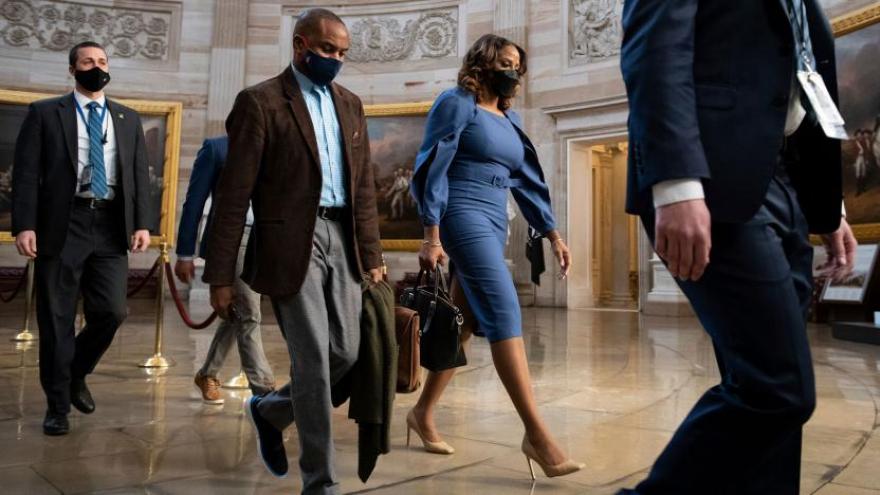 (CNN) -- House impeachment managers concluded their case against Donald Trump on Thursday, urging the Senate over two days to convict the former President for inciting the insurrectionists that attacked the US Capitol, arguing Trump was responsible for the deadly January 6 riot, failed to stop the attackers and showed no remorse afterward.

The managers used their final day of arguments in the Senate impeachment trial to show how the insurrectionists who carried out the attack on the Capitol last month said they did it at Trump's direction. The managers focused on Trump's history of celebrating violence among his supporters leading up to the attack, and his claims that his conduct was "totally appropriate" as a warning he could try to do it again if given the chance.

Rep. Ted Lieu, a California Democrat, argued that Trump's response to the riots shows he would "undoubtedly cause future harm if allowed."

"I'm not afraid of Donald Trump running again in four years," said Lieu, one of the impeachment managers. "I'm afraid he's going to run again and lose. Because he can do this again."

The Democrats' arguments Thursday were at a decidedly lower decibel than on Wednesday, when the entire Senate was at attention while violent videos were played showing the chaos at the Capitol and disturbing new revelations about just how close the rioters were to reaching lawmakers and then-Vice President Mike Pence.

Thursday's session was intended to drive home the point that Trump not only was responsible for the insurrectionists descending on the Capitol, but also that he did nothing while the violence unfolded and failed to apologize for it or even acknowledge the damage that had been done.

Wrapping up the House's case, lead impeachment manager Jamie Raskin of Maryland pleaded with senators to convict Trump, warning of the historical consequences if he is acquitted.

"If you don't find this a high crime and misdemeanor today, you have set a new terrible standard for presidential misconduct in the United States of America," Raskin said.

"Let's not get caught up in a lot of outlandish lawyers' theories here," Raskin said. "Exercise your common sense about what just took place in our country."

Trump's lawyers get their turn to present to the Senate on Friday. They're expected to finish their presentation in a single day, according to two sources, and plan to argue that Democrats glorified violence in their presentation, that the trial is unconstitutional and that Trump's speech is protected by the First Amendment.

Senate Republicans largely praised the Democratic managers' presentation, saying it was both compelling and disturbing. But that doesn't mean Republicans are changing course on the ultimate verdict, which is still unlikely to reach anywhere near the two-thirds vote needed for conviction, which would require at least 17 Republicans to vote that Trump is guilty.

Most Senate Republicans are still relying on the argument that the trial itself is unconstitutional because Trump is no longer president.

"I have to compliment the impeachment managers just in terms of their presentation preparation. I thought it was excellent," said Sen. John Cornyn of Texas, a member of Senate GOP leadership. "I don't agree with everything. But I think they set the standard pretty high" for Trump's team.

But Cornyn still doesn't sound open to conviction. "The biggest concern I have is about the idea of impeaching a former officeholder without explicit authorization in the Constitution and what that means to exact retribution on political opponents," he said.

Sen. Mike Rounds, a South Dakota Republican, praised Lieu's warning in particular about what Trump would do if he ran again and lost.

"I think that was a very powerful statement on his part. And I know I wrote that down," Rounds said, before returning to the constitutionality argument. "But once again, the issue for most of us is, are you asking us to do something that we simply don't have the capability of doing because the Constitution does not give us that tool with regard to a private citizen."

Six Republicans voted with Democrats that the trial was constitutional on Tuesday, which many Republicans say is the likely ceiling for the number of GOP conviction votes. No Republican has said yet they will vote to convict Trump. In Trump's first impeachment trial last year, Sen. Mitt Romney of Utah was the only Republican to find him guilty.

"Since I haven't heard the alternative -- the other side -- present its case yet, I really want to wait," said Sen. Susan Collins, a Maine Republican.

"But it's moving fast so you won't have to wait that much," Collins added, saying she hoped Trump's team would "be as specific as the House managers were -- who went through the evidence, provided legal arguments and gave a very thorough presentation."

'He struck a match'

The Democratic managers have pushed forward with their case trying to win over skeptical Republican jurors, arguing both to the Senate and the public that Trump was responsible for the riot and all of the consequences that have stemmed from it.

Rep. Diana DeGette of Colorado began the House Democrats' second-day presentation by using the insurrectionists' own words before, during and after the storming of the Capitol to show that they believed they were acting at Trump's direction.

"They truly believed that the whole instruction was at the President's orders. And we know that, because they said so," DeGette said. "Many of them posed for pictures, bragging about it on social media. This was not a hidden crime. The President told them to be there, and so they actually believed they would face no punishment."

Never-before-seen Capitol security camera footage Democrats aired on their first day of arguments forced senators to relive the harrowing attack and confront chilling new details about the incredibly serious threat posed to everyone in the Capitol, including lawmakers.

In their second day, the Democrats took a step backward and showed how Trump has long embraced violence, from his response to White supremacists marching in Charlottesville, Virginia, in 2017 to the armed protesters who jammed into the Michigan state Capitol last year. Raskin said the Michigan protests in April 2020 were a "preview of the coming insurrection."

"This Trump-inspired mob may indeed look familiar to you: Confederate battle flags, MAGA hats, weapons, camo Army gear, just like the insurrectionists who showed up and invaded this chamber," the Maryland Democrat said.

The managers focused on Trump's lack of remorse following the deadly January 6 attack and the harm it caused both inside and outside the building. That included the physical and mental toll on the more than 100 police officers who were injured along with the damage to America's standing in the world as a beacon of democracy, with Russia and China trying to take advantage of the chaos.

To close the day, Raskin and Rep. Joe Neguse of Colorado argued Trump's claims that his speech was protected by the First Amendment did not pass muster, because he turned the rioters loose on the Capitol.

"He struck a match, and he aimed it straight at this building, at us," Neguse said.

Trump team gets its turn Friday

Trump's team will get its chance to respond to the House's case on Friday, where they plan to make a "short, tight and direct" presentation that wraps up in one day, according to a source close to the legal team.

The team plans to include video presentations showing Democratic leaders using similar language to Trump, including one clip of Senate Majority Leader Chuck Schumer outside the US Supreme Court, saying, "I want to tell you, Gorsuch, I want to tell you, Kavanaugh, you have released the whirlwind, and you will pay the price. You won't know what hit you if you go forward with these awful decisions," referring to Supreme Court Justices Neil Gorsuch and Brett Kavanaugh.

Those comments, of course, didn't lead to a violent attack or an attempt to overturn the results of an election.

Trump's lawyers will also make the case Senate Republicans are most eager to embrace -- that the trial is unconstitutional -- which the Senate already voted on earlier in the week.

"This trial never should have happened," Trump attorney David Schoen told Fox News in an interview conducted Thursday during the trial. Schoen said the goal was to make the trial "as short as possible."

Trump's lawyers on Thursday tried to deny the rioters were directly ordered by Trump to do what they did, though that's been a key part of the evidence Democrats have presented.

"Did someone say that they heard directly from President Trump?" defense attorney Bruce Castor responded to CNN when asked for his reaction to the videos played. "I don't believe that's what happened, no."

On Friday, Trump lawyers Schoen, Castor, Michael van der Veen and William Brennan are all expected to speak. Because the legal team is so disorganized, Trump's allies are apprehensive about how the defense will go. Trump erupted Tuesday as Castor made a meandering opening argument.

After Trump's team concludes, the Senate will have up to four hours to ask written questions of the legal teams, and then the House managers could seek a vote on hearing from witnesses. But it's not clear yet whether they plan to do so.

If there is no effort to seek testimony from witnesses, the trial is likely to wrap up with a vote on conviction sometime this weekend. Democratic senators said Thursday that they don't see a need for witnesses because the managers made their case -- another sign it's unlikely witnesses will be called.

"I think the case has been made," said Maine Sen. Angus King, an independent who caucuses with Democrats. "I don't know what witnesses would add."