Impeachment trial: Senators to give speeches explaining their votes after closing arguments Monday 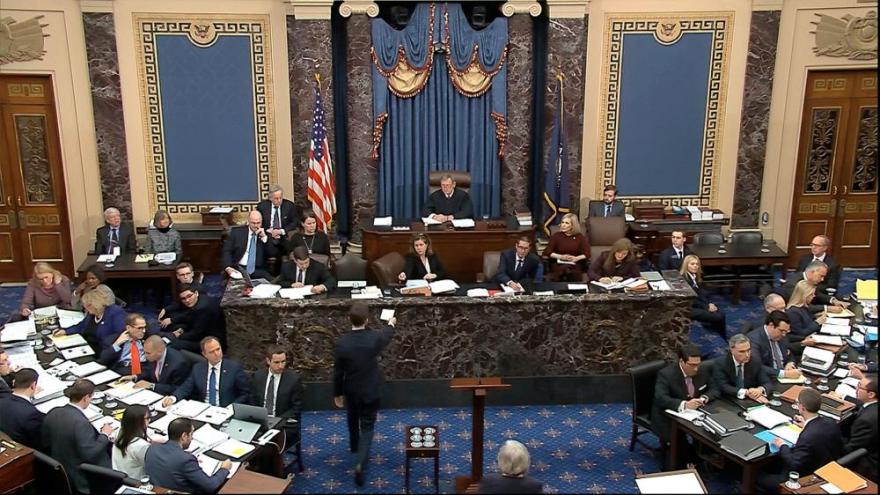 The House impeachment managers and President Donald Trump's legal team will have a final chance to make their pitch to any senators still on the fence about the verdict in the President's impeachment trial, even if the outcome is a forgone conclusion. This image is from video in the Senate at the Capitol in Washington on Wednesday, Jan. 29, 2020.

(CNN) -- The House impeachment managers and President Donald Trump's legal team will have a final chance Monday to make their pitch to any senators still on the fence about the verdict in the President's impeachment trial, even if the outcome is a forgone conclusion.

The impeachment managers and defense counsel are making their closing arguments for two hours each on Monday to summarize their case, starting with the House managers. The Senate is poised to acquit Trump when it takes a final vote on Wednesday at 4 p.m. ET. But there still is some uncertainty over the margin of the acquittal vote — and whether any senators cross party lines.

The end-game of the trial is set this week after the Senate voted last week to defeat a motion for subpoenaing witnesses and documents, which would have extended the proceedings. In that vote, which failed 49-51, two Republicans, Sens. Mitt Romney of Utah and Susan Collins of Maine, joined with Democrats.

A handful of senators in both parties have still not said whether they will vote to convict or acquit the President on the two articles of impeachment — abuse of power and obstruct of Congress — that the House passed in December.

On the Republican side, Collins, Romney and Sen. Lisa Murkowski of Alaska are being eyed by Democrats as possible crossovers.

Murkowski voted with Republicans against calling more witnesses, but she criticized both the House impeachment case and the Senate trial process, saying Friday she was "disappointed" in "all sides."

Murkowski said Monday she has made up her mind about how she will vote, but she declined to say which way it would be.

On the Democratic side, Sens. Joe Manchin of West Virginia, Doug Jones of Alabama and Kyrsten Sinema of Arizona have not said how they will vote.

Manchin said Friday he didn't know how he would vote yet.

"I'm not winging it," he said, adding that he's going "dissect it."

Jones said he would announce his decision this week. "I want to make sure I get it right," he told reporters leaving the Capitol on Friday.

Sinema declined to answer questions on the final vote as she departed Friday.

Sen. Lamar Alexander, the Tennessee Republican who was a pivotal "no" on the witness vote, said last week that the House proved its case. But he argued against witnesses because he said the offense didn't warrant removal, and on Sunday, he predicted a partisan outcome to the final vote.

"If you start out with a partisan impeachment, you're almost destined to have a partisan acquittal," Alexander said on NBC's "Meet the Press."

Asked Monday if she agreed with Alexander that Trump's conduct was inappropriate, Murkowski said: "I would concur."

After Monday's closing arguments, senators will have roughly two days to be able to explain their vote publicly on the Senate floor, a welcome chance for many senators who have been barred from speaking in the Senate for the duration of the trial.

The setup was the result of frantic negotiations on Friday for mapping out the final stages of the impeachment trial. Many Republicans, particularly those allied with Trump, wanted to push to end the trial after Friday's witness vote, even if it pushed the final verdict into the middle of the night Saturday.

But several Republicans, including Collins and Murkowski, wanted the chance to speak to explain their votes. During the 1999 Bill Clinton impeachment trial, the Senate spent three days in closed session to deliberate.

Democrats, meanwhile, had 2020 considerations — with Sens. Elizabeth Warren of Massachusetts, Bernie Sanders of Vermont and Amy Klobuchar of Minnesota eager to spend the weekend in Iowa. Plus, they weren't interested in allowing the President to be acquitted ahead of Tuesday's State of the Union address.

So the two sides agreed to hold closing arguments on Monday, which the 2020 candidates have returned to Washington for, before leaving the Senate floor open for speeches — which doesn't require the presence of the full Senate like the trial.

For the House impeachment managers, Monday's closing argument will give them one more chance to argue to senators — and perhaps more importantly, explain to the public — their case that the President withheld a White House meeting and $400 million in security aid to pressure Ukraine to investigate former Vice President Joe Biden.

House Intelligence Chairman Adam Schiff, the House's lead impeachment manager, has not said how he will respond to the Senate's decision not to call in former national security adviser John Bolton, even after allegations emerged in his draft book manuscript that Trump told him the aid to Ukraine was conditioned on the investigations.

Schiff sought Bolton's testimony in the House impeachment inquiry last year, though he did not pursue a subpoena after Bolton's lawyer threatened to take it to court. Schiff was coy on Sunday about whether he will pursue Bolton again.

"I don't want to comment to this point on what our plans may or may not be with respect to John Bolton, but I will say this: whether it's before -- in testimony before the House -- or it's in his book or it's in one form or another, the truth will come out, will continue to come out," Schiff said on CBS' "Face the Nation."