Impossible Burgers are coming to 1,500 cafeterias this fall 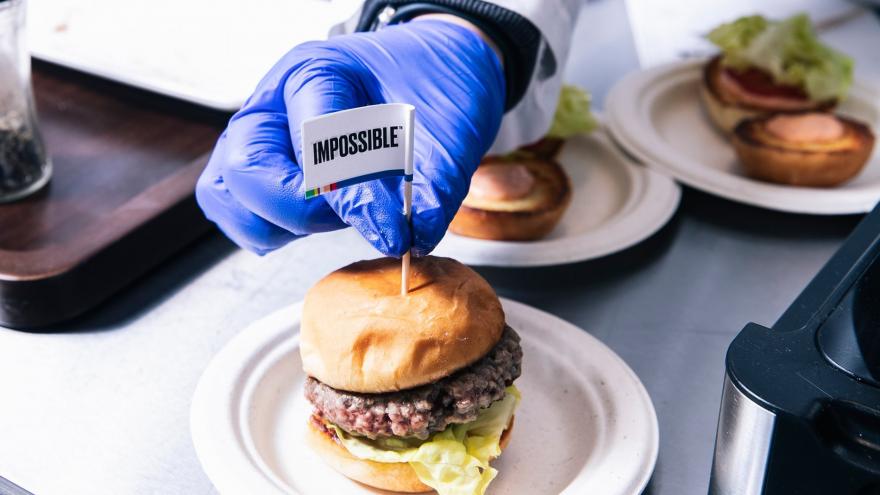 (CNN) -- The Impossible Burger is everywhere.

Starting this fall, the plant-based meat substitute will be available at about 1,500 colleges, corporate cafeterias and hospitals through Sodexo, a food service company. Sodexo announced the news on Thursday — the same day that Burger King starts selling its Impossible Whopper nationwide.

That means workers at corporate offices of major companies, including Unilever and Ford, students and fast food customers throughout the country will soon be able to buy an Impossible burger with ease. Although Impossible has faced shortages in the past, it hired more employees at its Oakland production facility and expanded capacity through a partnership with a major meat processor. That should allow the company to meet demand, Impossible says.

Foodservice providers and fast food chains are partnering with Impossible and its competitor Beyond Meat to cash in on the plant-based protein trend, which is being driven primarily by consumers who want to eat less meat for health and environmental reasons.

"Plant-based is a pretty big strategy for us," said Rob Morasco, senior director of culinary development at Sodexo. "More plant on the plate really is the number one trend we're seeing" among all types of eaters, he said.

There are two ways to approach the trend, Morasco said. One is to create vegetarian versions of foods commonly made with fish or meat, such as crab cakes or tamales. The other is to use pre-made meat substitutes, like Impossible's protein, for dishes designed to mimic the taste of meat. Sodexo does both.

To find a convincing substitute for ground beef, Sodexo conducted a blind taste test and found that "Impossible was the clear victor," Morasco said. Sodexo works with other companies for chicken substitutes and fish substitutes.

Participating Sodexo locations will be able to start ordering from the new eight-product line, which includes a creole burger, sausage breakfast sandwich and sausage gravy and biscuits, on August 19th. Sodexo cafeterias don't have to order the products, but Morasco expects that the "vast majority" of locations will because of Impossible's popularity.

Meat substitutes may once have been a niche product, but today they're attracting mainstream consumers, including non-vegans.

Big companies testing out meat alternatives often pair them with animal products. Subway's new meatless sub, featuring plant-based protein made by Beyond, is served with Parmesan cheese. Little Caesars' Impossible pie test rolled out with a cheese pizza. And Tyson, a meat company, is exploring the trend with products blended with real meat and vegetables.

Overall, US retail sales of plant-based foods have grown 11% in the past year, according to a July report from trade group Plant Based Foods Association and the Good Food Institute, a nonprofit that supports plant-based businesses. Beyond Meat's revenue reached $67.3 million in the second quarter, up from $17.4 million during the same period last year, a 287% spike.

Barclays predicts the alternative meat sector could reach about $140 billion over the next decade, capturing about 10% of the global meat industry.