United States among the deadliest countries for journalists for first time 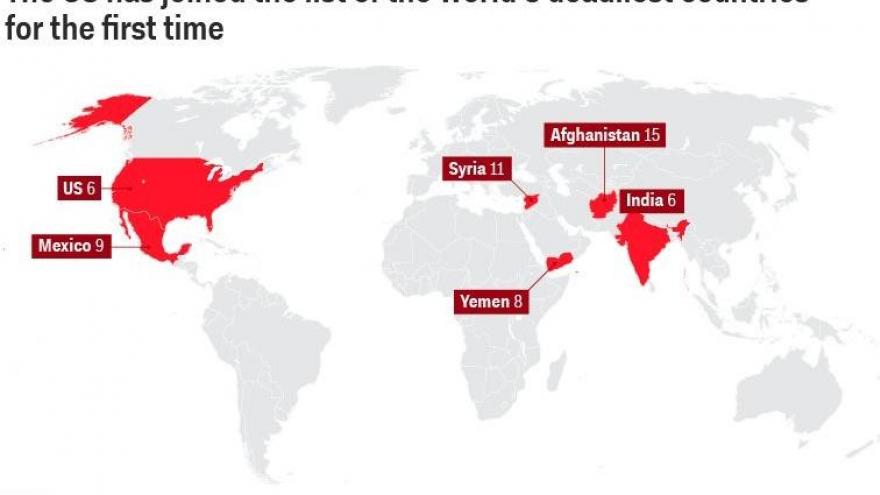 In a year when reporters have been decried as the "enemy of the people" from the highest echelons of government, the United States made its dubious debut among the deadliest countries for journalists.

(CNN) -- In a year when reporters have been decried as the "enemy of the people" from the highest echelons of government, the United States made its dubious debut among the deadliest countries for journalists.

Reporters Without Borders -- known internationally as Reporters Sans Frontières, or RSF -- has released its lists of journalists who went missing, or were killed, detained or held hostage between January 1 and December 1.

Read the report for yourself

"Journalists have never before been subjected to as much violence and abusive treatment as in 2018," a statement accompanying the report said.

While the United States did not make most lists, the country for the first time ranked among the top five deadliest countries, with six journalists killed in 2018, tying it with India.

The report also included a special section on Jamal Khashoggi, who was living in self-imposed exile in the United States and working for The Washington Post when he was slain at a Saudi Consulate in Turkey. Despite mounting evidence that Crown Prince Mohammed bin Salman ordered the hit, Saudi Arabia has called the allegations unsubstantiated.

Four of the American journalists were killed in the Capital Gazette shooting in Annapolis, Maryland, on June 28. Angry about a 2011 article, a man with a shotgun killed journalists Rob Hiaasen, Gerald Fischman, John McNamara and Wendi Winters (along with sales assistant Rebecca Smith).

Two other journalists -- WYFF anchor Mike McCormick and photojournalist Aaron Smeltzer -- were killed covering Subtropical Storm Alberto in May when a tree crushed their van in Polk County, North Carolina.

Ahead of the United States and India on the list are Afghanistan with 15 journalists killed, Syria with 11, Mexico with nine and Yemen with eight. Notably missing from the list is Iraq, which for the first time since the 2003 US-led invasion, had no reporters slain, the journalists' group said.

The six Americans were among 80 journalists killed worldwide in what RSF Secretary-General Christophe Deloire called a critical situation for journalists around the globe. Deloire drew a link between the deaths and a spike in rhetoric aimed at spurring disdain toward the media.

"The hatred of journalists that is voiced, and sometimes very openly proclaimed, by unscrupulous politicians, religious leaders and businessmen has tragic consequences on the ground," he said in a statement. "Amplified by social networks, which bear heavy responsibility in this regard, these expressions of hatred legitimize violence, thereby undermining journalism, and democracy itself."

Buttressing his point, the report noted that three of the countries -- the United States, Mexico and India -- are not at war yet still managed to make the list alongside three countries mired in conflict.

In Mexico, journalists covering political corruption and organized crime found themselves targets, while in India, where the killings were particularly barbaric, the RSF blamed social media-fueled hate campaigns "fed by troll armies linked to the Hindu nationalist right."

Though the United States is not among the countries with the most missing, captive or imprisoned journalists -- categories dominated by China and the Middle East -- the report highlighted the kidnapping of Austin Tice.

"The US government recently said that it believes Austin Tice, an American journalist who was kidnapped near Damascus in 2012, is still alive and that it is doing everything possible to bring him back to the US as soon as possible," the report said.

"Before he was detained, Tice's work was published in The Washington Post and Al Jazeera amongst others. It is believed that the journalist is not being held by an Islamist armed group."