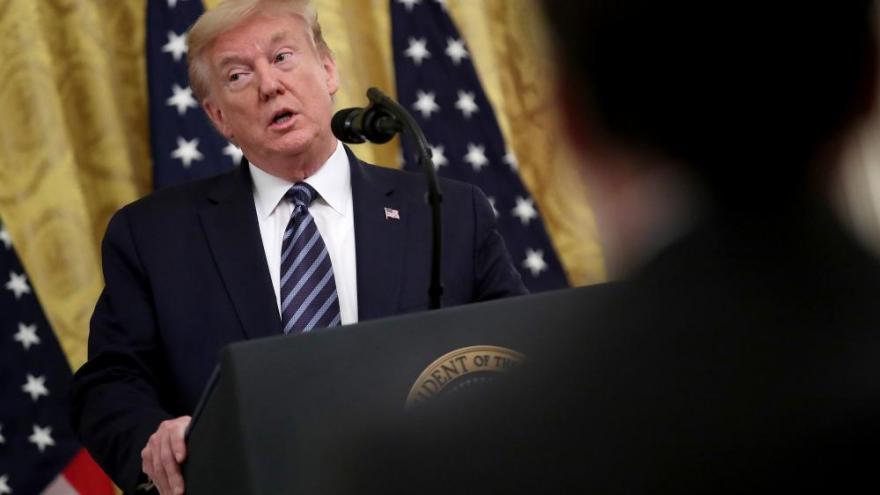 President Donald Trump speaks during an event on protecting America’s senior citizens in the East Room of the White House April 30, 2020 in Washington, DC. Older adults and those with underlying medical conditions are at higher risk for serious complications from COVID-19.

(CNN) -- President Donald Trump declared Wednesday his coronavirus task force would continue "indefinitely" a day after he and Vice President Mike Pence said they were phasing out the health-focused panel in favor of a group focused on reopening the economy.

Trump, who said the panel would adopt a new focus on vaccines, is also considering naming an administration point person on treatment and vaccine efforts, according to people familiar with the matter.

And Jared Kushner, the President's son-in-law and senior adviser, continues to play a central role in the White House's response effort despite questions about the efficacy of his attempts to source badly needed supplies.

According to Pence's public schedule, the task force was slated to meet at 4 p.m. ET on Wednesday.

Some health experts had sounded alarm at the apparent disbanding of the task force since cases continue to arise. After touting achievements on testing and supplies, Trump said during a visit to a mask production facility in Arizona on Tuesday he was "looking at a little bit of a different form" for the task force "and that form is safety and opening."

Pence told reporters during a discussion in his office that administration officials were "having conversations about that and about what the proper time is for the task force to complete its work and for the ongoing efforts to take place on an agency-by-agency level."

Pence said the discussions are a "reflection of the tremendous progress we've made as a country."

But a day later, Trump wrote on Twitter the task force would "continue on indefinitely with its focus on SAFETY & OPENING UP OUR COUNTRY AGAIN."

"We may add or subtract people to it, as appropriate," he wrote. "The Task Force will also be very focused on Vaccines & Therapeutics. Thank you!"

The reversal came after outcry and concern from outside health experts, who said it was too early to disband the health-focused panel. Senior administration officials said the plan was to phase out the current iteration of the task force by Memorial Day, though noted the panel's doctors -- including Dr. Anthony Fauci and Dr. Deborah Birx -- would still advise the President and speak to the media.

Trump has been eager to demonstrate momentum on combating the disease and reopening the country, including making his first foray from the East Coast on Tuesday for a trip to Arizona. He has acknowledged privately that his reelection chances in November will largely hinge on how voters view his response to the crisis and the strength of the economy.

To that end, the White House has turned its attention to reviving a moribund economy and advancing development of treatments and a vaccine for the virus. There has been increased discussion in recent days among some Trump aides of appointing a central figure to oversee vaccine and treatment options for coronavirus, according to people familiar with the discussions.

Kushner, whose parallel task force designed to corral the private sector into providing badly needed supplies has come under new scrutiny, is likely to be "engaged" in the administration's vaccine effort, a senior administration official said on Wednesday. But the official said the White House is eying a "prestigious" and "empowered" director to lead the effort.

The conversations remain somewhat preliminary, but there is a sense among these aides that naming a "czar" to take charge of drug and vaccine development would streamline and potentially speed up the efforts. It's not clear the White House would use the term "czar."

Scientists who are part of the Trump administration's coronavirus vaccine project have identified 14 vaccines to focus on for development, according to a senior administration official. Those involved in the effort expect to have six to eight of the vaccines being tested make it to subsequent rounds of trials, the official said. Officials hope to have three to four vaccines make it through final testing and be made available, but that depends on how the testing and clinical trials proceed and how successful they are.

When the administration announced the creation of "Operation Warp Speed," it did not name the person who is leading it, though said Health and Human Services Secretary Alex Azar and Defense Secretary Mark Esper had been tasked by Trump with standing up the effort.

Azar, however, remains on shaky standing at the White House. And when Trump was asked last week who was in charge of "Operation Warp Speed," he said he was.

"I'm really in charge of it," he said. "I think probably more than anything I'm in charge."

The HHS division tasked with vaccine development, BARDA, has seen its leadership in flux after the former director Dr. Rick Bright was ousted. Bright filed a formal whistleblower complaint on Tuesday alleging his early warnings about coronavirus were ignored that that his concerns about promoting an untested therapeutic heralded by the President led to his ouster.

BARDA has issued close to $1 billion in grants to Moderna and Johnson and Johnson to develop a vaccine.

While the task force has discussed these issues over the past two months, there hasn't been a central figure to coordinate them specifically. Fauci, in his role at the NIH, has been focused on vaccine development, but his other roles on the task force have also occupied his time.

People familiar with the matter said the administration could name a director for Operation Warp Speed in the next a few days, but that interviews for the role are still ongoing.