In Surfside, a grieving community comes together as hope fades for those trapped in building collapse 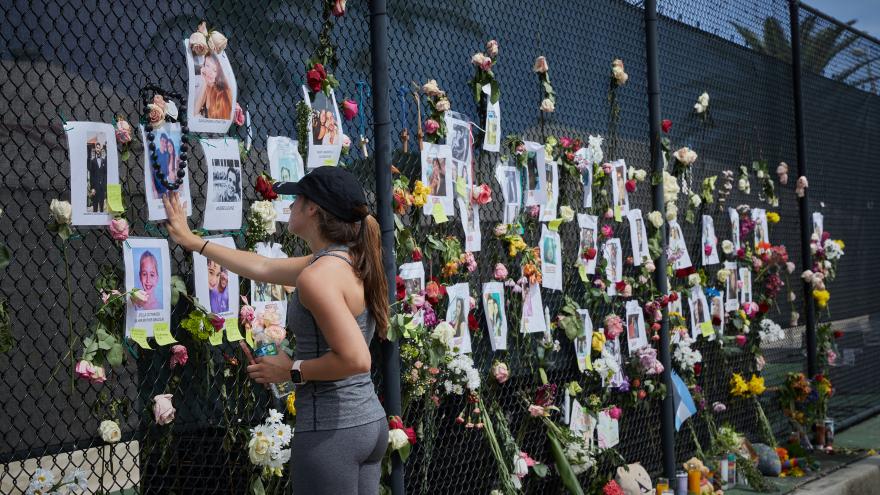 Residents, friends and relatives visit the memorial wall of photos and flowers for the missing near the site of the collapse. Credit: Jeffery A. Salter/CNN
Faith Karimi, CNN

(CNN) -- As the chances of finding survivors diminish following the condo tower collapse in South Florida, loved ones of those still missing spend their days filled with hope and fear.

Shell-shocked evacuees and family members gather daily on the second floor of a hotel in Surfside to get updates. Between tearful calls and hugs from visiting therapists, they sit on white leather chairs scattered around the lobby.

At least 10 people died and 151 remain unaccounted for following the tragedy at Champlain Towers South.

Margarita Bermudez, who flew in from Puerto Rico last week, is one of a steady stream of family members who are looking for their relatives. Her nephew, Luis Andres Bermudez, his mother, Ana Ortiz, 46, and her boyfriend, Frankie Kleinman, were in building 702.

Andres was diagnosed with muscular dystrophy when he was born and suffered a stroke last year, Bermudez said. With rescue crews taking days to sift through the mountain of rubble, Bermudez feared it'd be too late to get to her nephew.

"Luis always has so much faith and hope even though everything that has happened to him sucks," Bermudez, says. "We're scared, but what else can we do? It's our turn to have hope now."

Surfside is a tiny town of about 6,000. But the images of the collapse reverberated around the world.

The residents of the condo complex mirror Miami's multicultural population. Dozens of missing people are from various Latin American countries, including Colombia, Venezuela, Uruguay and Paraguay.

The town is also home to a large population of Orthodox Jews. At thehotel's family reunification center, it's common to hear a mix of conversations in Hebrew, Spanish, English and Portuguese.

Synagogues and churches opened their doors for emergency prayer services after the collapse. Rabbi Zalman Lipskar told CNN's Randi Kaye at least 20 people associated with the Shul of Bal Harbour are unaccounted for. Kleinman is one of those missing, who are between ages 20 and 60.

The rabbi said he spoke with a woman who had seven relatives unaccounted for.

"It's just been heart-wrenching ... not knowing, and not being able to really deal with this magnitude of the tragedy that's unfolding," Lipskar said. "The only thing that helps in these times is kindness and empathy and togetherness, because you can't take away the reality," he added. "It's a reality, we accept it and we have to learn as we do in our culture of resilience to move forward."

At Temple Menorah, three generations of one family are among those unaccounted for, Rabbi Eliot Pearlson said. "It's very difficult to comprehend how it's possible," he said.

A few blocks away from the building's ruins, St. Joseph's Catholic Church held a vigil for those missing Saturday. Scores prayed, sobbed and hugged with the tower's ruins visible in the background.

Father Juan Sosa said about 10 parishioners are unaccounted for -- but the number of people linked to the church could be higher. The condo tower is popular among vacation renters and international visitors, who worship there while in town.

Most of Surfside's main streets remain empty as police cars with flashing lights limit access to the collapse site.

But even with the usually bustling summer streets nearly deserted, residents are finding ways to mourn.

On a recent night, eight people held hands next to police barricades and prayed. Their words got lost in a chaotic mix of sirens, overhead drones and drilling. Pungent smoke from the smoldering ruins hang in the air.

Leo Soto, whose friend from high school lived in the condo tower and remains missing, said he felt helpless and wanted to help. He woke up one morning at 4 and set up a memorial with photos of those missing near the site of the wreckage. Florists from all over the city donated roses to the wall, he said.

At the beach behind the condo tower, Maria Gonzalez and other neighbors left candles and white daisies in the sand. She lives two blocks away and woke up to a blackout in her neighborhood when the tower collapsed.

"I saw lights and firetrucks, thought they were there to fix the power and went back to sleep," she said. When she woke up later that morning, she realized the magnitude of the tragedy.

At the beach, Gonzalez and her granddaughter joined a group in saying the Lord's Prayer. They sat on the sand and lit the candles over and over. The breeze kept blowing them out.

"We just want to do something, however small, to honor our neighbors," she said.

Families of those missing hang on to hope and fear

At the reunion center, families of those missing meet daily and quietly wait. While they are hanging on to hope, some said they have a foreboding feeling.

On Saturday, Bermudez's voice cracked with emotion as she talked about her nephew.

"Oh my God, look at his face, he is the most awesome guy," she said, whipping out a phone and showing his photo.

He was a big fan of electronic music, sushi and painting -- and most of his art featured different types of sushi rolls.

"His only movement was his hand so he drew and painted a lot," Bermudez said. "And he loves sushi -- especially eel sushi."

The next day, the Miami-Dade Police Department announced the remains of Luis Andres Bermudez and his mother had been recovered.