In the Black Lives Matter movement, immigrants find themselves in a tough position 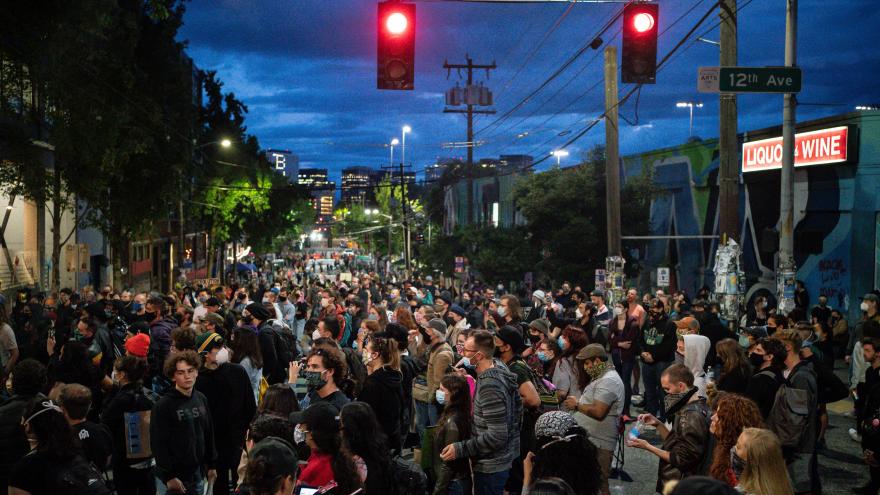 (CNN) -- After the first wave of nationwide protests over George Floyd's death turned violent, immigrants on US visas who support the Black Lives Matter movement's protest faced a choice: to join the protests and jeopardize their legal status as immigrants or sit it out and save their future in the country.

Jennifer Scheurle, a German immigrant living in Bellevue on a work visa, says she has always been a politically engaged person, especially having participated in Berlin's strong protest culture prior to arriving in the United States.

The Black Lives Matter movement inspired her, but when things turned violent, she was forced to reconcile that with the realities of her visa status.

"I talked to my family and my partner about whether or not it's worth it for me to protest in person and risk the visa. We came to a conclusion that it would be detrimental to my personal well-being and my effectiveness here in the US, if I go back to Germany," she said.

The consequences of an arrest

A foreign national in the US is allowed to participate in peaceful demonstrations or rallies and if they get arrested, the US criminal justice system ensures that they are entitled to the same constitutional protections as a US citizen.

However, the immigration consequences of the arrest may be quite significant.

If they get detained, arrested or charged, it could be problematic, even if the charges were dropped, according to Parisa Karaahmet, an immigration attorney at Fragomen, an immigration law firm. "They could be asked to disclose the arrest in an application for a visa or at a green card interview in the US for any immigration benefits."

Immigrants like Scheurle are largely aware of how these situations could weigh heavily on their immigration status, which could curb their level of participation and their method of expressing their political opinion.

"This is a dilemma that immigrants are facing right now," says Andrea Flores, the deputy director of immigration policy for the ACLU. "So many immigrants want to participate, but the risk is always there. It's important to protest and it's important to stay safe. But the decision is unfair to people who don't have enough protections due to their immigration status."

"Given the uncertainty that the Trump administration has placed on several visa categories, it's understandable that there is anxiety around participating in protests," she adds.

'We're not breaking any law'

Several immigrants discussed their concerns with CNN but declined to even go on the record for the fear of consequences.

However, not all immigrants are choosing to sit it out.

Prerna Gupta, an Indian national on a work visa, has been going to protests in her neighborhood in Brooklyn.

"Nothing is wrong with marching with people. We're not breaking any law," she said, adding that the violent protests in the past haven't really discouraged her from going.

"It's a thought but not a big enough thought to reconsider going to a protest."

Gupta says it's important for her to protest because racism is not just an American problem.

"I have been subjected to racism elsewhere in the world as well. When I'm protesting, I'm also protesting for a change globally," she said.

She has, however, been taking precautions while protesting. Most of it comes from what she's read on the internet, including not bringing her ID along and wearing all black clothes, so she is not easily identifiable.

While Scheurle doesn't want to go to protest in person, she has been helping on the side. She started out by making protest-ready kits for demonstrators. Eventually, she got involved with local groups to help with organizing ground groups for medical attention, setting up supply chains and soliciting donations to get resources in place for helping these protests.

"I don't know how real the threat of helping the protests is. There is no blueprint for this and nobody can tell me if this is putting me at risk or not. I am in the grey zone so I'm trying to strike the balance between doing as much as I can and protecting my visa."

Divyansh Kaushik, an international student working towards a Ph.D at Carnegie Mellon University, is also not joining the protests in Pittsburgh. He is scared about the coronavirus pandemic that is still a threat across the country, and being on a student visa just completely puts protesting out of question.

"If things turn violent and someone points a finger at you, what would you do? There aren't any legal protections," he said. "I could risk losing my [visa] status."

Instead, as the vice president of external affairs at the university's graduate student assembly, Kaushik has been joining his fellow students in demanding the university adopt more inclusive policies and actions.

The concern is not limited to a few. Karaahmet says her law firm is getting a lot of questions from clients around this.

"The issues resonate irrespective of nationality or background. They want their voices heard. But they are concerned about their immigration status and want to know the scope of what their participation can look like," she said.

"A non-US citizen is perfectly entitled to participate, however, there are special risks that they just have to take into account before they make their decision about the activities they want to engage in."

'I have to have these hard conversations'

Protests are critical to the immigrant community, Flores says, and black immigrants have a stake in it, too.

"Because black people are over-policed, that means that additional contacts with the criminal justice system puts black immigrants at increased risk of a violation that jeopardizes their residency in the US," she said.

If any foreign nationals do find themselves in an encounter with police, a criminal defense lawyer should certainly be their first call and an immigration lawyer should come second, Karaahmet recommends.

Ultimately, Kaushik says, a lot of his decisions hinge on his visa status. "I just try to err on the side of caution."

And Scheurle chooses to think about the people who want her to stay in the US.

"I have to have these hard conversations with people around me who want me to stay. I have a responsibility towards my employer and towards people I love."