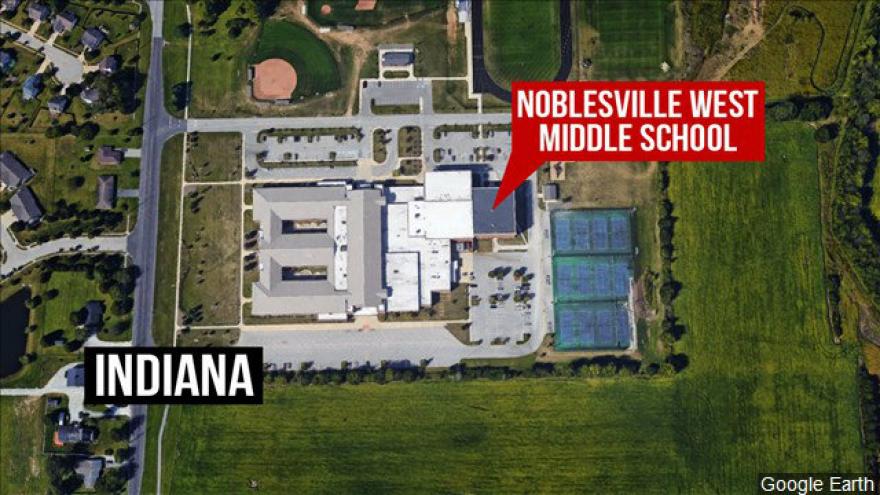 A 13-year-old boy accused of shooting and wounding a classmate and a teacher at their suburban Indianapolis school this past May was expected to admit to carrying out the attack. Photo courtesy Google Earth

NOBLESVILLE, Ind. (AP) — A 13-year-old boy who admitted Monday to shooting and wounding a classmate and a teacher at a suburban Indianapolis school apologized during a daylong juvenile court hearing that included details of his online searches for school shootings and testimony from the teacher credited with halting the May attack.

The boy, dressed in an orange-and-white striped jumpsuit, sat next to his parents during the hearing. He admitted to shooting seventh-grade science teacher Jason Seaman and 13-year-old classmate Ella Whistler . The admission would be a guilty plea if he had been charged as an adult in the May 25 attack at Noblesville West Middle School, about 20 miles (32 kilometers) north of Indianapolis.

Seaman, who was shot three times, attended Monday's hearing with his wife and later testified. Whistler, who was shot seven times, did not attend.

The boy apologized to Seaman and Whistler through a statement his attorneys read where he said, "If I could, I would take it back. ... I'm sorry for the pain I've caused you."

Hamilton Circuit Court Judge Paul Felix said he would not render a decision Monday on the disposition in the case, which would be a sentencing if the boy was charged as an adult. His options include ordering the boy to spend time in a mental health treatment center or to be held at a state juvenile detention center.

The boy's defense attorneys requested that he be sent to a residential program rather than a juvenile facility, saying he could be influenced by older teenagers there.

Prosecutors told the court the boy found the keys to a basement safe in his family's home, unlocked it and removed two handguns and more than 100 rounds of ammunition that he brought to the school in a backpack, The Indianapolis Star reported.

The Associated Press isn't using the boy's name because he's charged as a juvenile .

Prosecutors said the shooting unfolded after the boy finished a quiz early in Seaman's science class and asked to leave the room. The teen went to his locker, got his backpack and returned with two handguns and a knife, after leaving his backpack in a bathroom, prosecutors said.

Seaman testified that he was helping another student when the boy began firing.

He said he threw a small basketball he often carries with him at the student, then tackled him, even as the boy continued firing. Seaman said he pinned him to the floor and eventually forced the boy to the drop the weapon. He disarmed him of a second gun after telling his other students to run from the classroom and call 911.

"I think it'd be appropriate that (the boy) be detained and removed from society until it is 100 percent certain he is not a danger to himself or anyone else," he said.

Whistler's father, Cory Whistler, testified that he hopes the boy receives the "maximum sentence" for the shooting, which left his daughter with severe damage to an artery in her right arm.

The boy sat stoically for much of the hearing but began to tear up when his mom took the stand and apologized to Seaman, prompting his dad to hand him a tissue.

Prosecutors said that the day before the shooting the boy had filmed a video in his family's basement in which he made threats of violence and showed two handguns.

"Tomorrow's Friday, you know what that means. I have to take other people's lives before I take my own," prosecutors said the boy says in the video.

Investigators testified that the boy's online history was filled with searches for school shootings and that the day before the shooting he searched for: "What was the largest mass shooting in America" and looked for a "blueprint" of the school.

If the boy had been charged as an adult, he would have faced 11 counts, including attempted murder and aggravated battery.