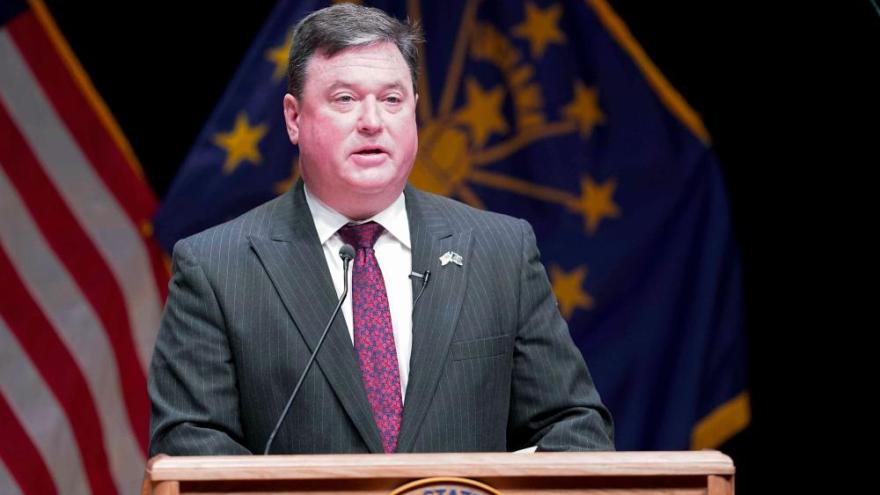 Todd Rokita, Indiana's Republican attorney general, said July 14 that authorities in his state are investigating -- for potential failure to report child abuse -- a doctor who said she recently helped a 10-year-old rape victim from Ohio obtain an abortion in Indiana, even as the attack already had been reported by the girl's mother and Ohio police were investigating.

(CNN) -- An Indiana doctor who said she recently helped a 10-year-old rape victim from Ohio get an abortion in her state reported the procedure to Indiana health officials within a required timeframe, documents show, as the state's Republican attorney general has said authorities are investigating the Ob-Gyn for potential failure to report the abortion and child abuse.

Dr. Caitlin Bernard, of Indianapolis, reported the abortion procedure to the Indiana Department of Health on July 2 -- two days after it was performed -- as required by the department, documents CNN obtained from the agency show. The young girl was raped in early May, and police in Columbus, Ohio, were first alerted to her pregnancy June 22, police documents and court testimony indicate.

Bernard helped the 10-year-old after Ohio banned abortion as early as six weeks of gestation following the US Supreme Court's ruling that overturned Roe v. Wade, she told CNN earlier this month. A little more than a week after the ruling, the girl underwent the procedure in Indiana, and emerging details of it have galvanized US officials on both sides of the abortion debate.

A Columbus, Ohio, man was charged this week with raping the girl, according to court proceedings CNN obtained through affiliate WBNS.

Attorney General Todd Rokita is investigating whether Bernard reported the abortion and abuse, as required by state law, he said Thursday after announcing the inquiry a day earlier on Fox News. In Indiana, an abortion procedure performed on a person younger than 16 must be reported to the state's departments of health and child services within three days after it is performed.

"The failure to do so constitutes a crime in Indiana, and her behavior could also affect her licensure. Additionally, if a HIPAA violation did occur, that may affect next steps as well. I will not relent in the pursuit of the truth," Rokita said in a statement. HIPAA -- the federal Health Insurance Portability and Accountability Act -- sets privacy standards for protecting patients' personal medical information.

The doctor's report to state health officials on July 2 -- two days after the procedure -- indicates the pregnancy was the result of the patient being "abused."

After CNN got the documents Bernard filed with the health department, Rokita's office added: "As we stated, we are gathering evidence from multiple sources and agencies related to these allegations. Our legal review of it remains open."

Attorney General Todd Rokita is investigating whether Dr. Bernard reported the abortion and abuse, as required by state law.

CNN has asked the Indiana State Department of Child Services whether Bernard also filed a report with that office and also reached out to Ohio's attorney general.

Bernard's attorney said the doctor "took every appropriate and proper action in accordance with the law and both her medical and ethical training as a physician."

"She followed all relevant policies, procedures, and regulations in this case, just as she does every day to provide the best possible care for her patients," attorney Kathleen DeLaney said in a statement. "She has not violated any law, including patient privacy laws, and she has not been disciplined by her employer.

"We are considering legal action against those who have smeared my client, including Indiana Attorney General Todd Rokita, and know that the facts will all come out in due time," the lawyer said.

Bernard practices at Indiana University Health and serves as an assistant professor at the school. Her employer conducted a review in this case -- with Bernard's "full cooperation" -- and determined she was "in compliance with privacy laws," IU Health said in a statement.

The case has attracted international attention. Bernard told CNN in early July she helped the Ohio girl obtain an abortion in Indiana after she was contacted by a child abuse doctor in neighboring Ohio. The girl was six weeks and three days into the pregnancy, the doctor said July 4.

US political officials since then have referenced those details, with some Democrats pointing to it as a consequence of the Supreme Court's landmark ruling, while some Republicans expressed doubt about the case or whether the girl even existed.

Indiana law permits abortion up to 20 weeks after fertilization (or 22 weeks after the mother's last menstrual period). After that, the only exceptions are cases in which the mother faces a risk to her life or the pregnancy poses the risk of "substantial permanent impairment," the law states.

Gerson Fuentes, 27, was arrested Tuesday in the case, according to Columbus police and court documents. He has been charged with felony rape of a minor under age 13, according to the Franklin County Municipal Court. Fuentes is being held on $2 million bond following his first court appearance Wednesday, according to the court. CNN has reached out to his attorney for comment.

Fuentes confessed to police Tuesday he raped the young girl at least twice, Det. Jeffrey Huhn testified Wednesday at Fuentes' arraignment. He "spoke with us and admitted to having vaginal intercourse with the victim on no less than two occasions" and then was arrested, Huhn said.

Police first were alerted to the child's pregnancy in late June through a referral by a local children's services department that was made by the 10-year-old's mother, Huhn testified. The incident reported to police happened May 12, according to a police affidavit. Columbus police were notified of it June 22 and began their investigation that day.

The girl underwent a medical abortion in Indianapolis on June 30, Huhn testified.

The girl on July 6 identified Fuentes as her assailant, and police on Tuesday with a search warrant obtained a swab of Fuentes' saliva DNA, the affidavit states. Fuentes that day went to police headquarters for questioning where he confessed to raping the minor, it says.

DNA from the Indianapolis clinic was being tested against samples from Fuentes and the child's siblings, the detective said.

Fuentes' next court appearance is July 22, court documents show. He is an undocumented immigrant, a US Immigration and Customs Enforcement spokesperson confirmed to CNN.

Correction: An earlier version of this story incorrectly stated the time period between the abortion and when Bernard reported it to health officials. It was two days.