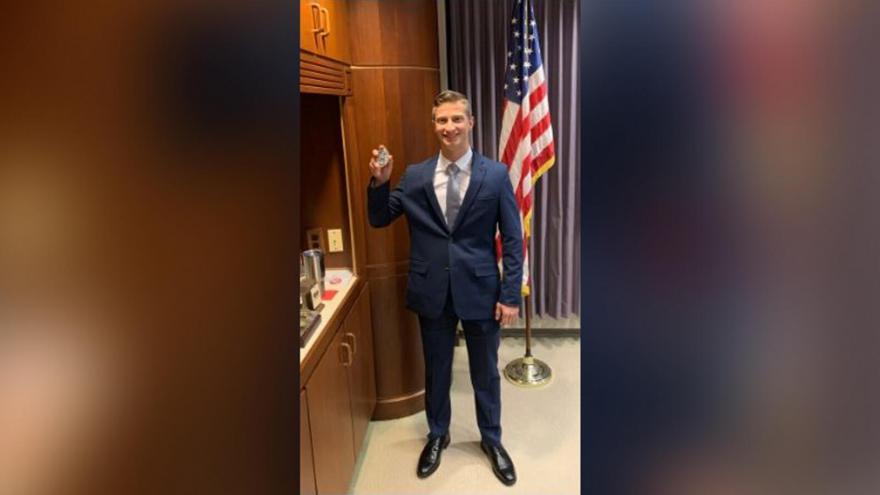 (CNN) -- A police recruit in Lafayette, Indiana, has been terminated after an internal affairs investigation determined he participated in an online Neo-Nazi chat forum, authorities announced Saturday.

A Twitter user brought recruit officer Joseph Zacharek to the attention of Lafayette Police Department late Friday, identifying him as having participated in the now defunct forum "Iron March" in 2016, according to a news release from the department.

The user who flagged the activity describes themselves on Twitter as an anti-fascist who aims to "expose" fascists.

Lt. Matt Gard with the Lafayette Police Department told CNN that the department called Zacharek after being alerted to the forum activity and said that Zacharek admitted to making the posts.

"The investigation has determined that Zacharek did participate in this online forum and that the information that was provided to LPD was accurate and credible," the department said in the news release. "Officer Zacharek's comments were not in harmony with the spirit of cooperation and inclusion in the community that the Lafayette Police Department values."

CNN was unable to reach Zacharek for comment on Monday.

Zacharek was hired in June of this year, according to the release. Since then, he had been working in a training environment and had "no exposure to the public," the department added.

The department said an initial background investigation of Zacharek, which included a review of personal social media accounts, did not reveal ties to the forum.

"While this information may not have been accessible through our investigative processes, we are appreciative that it was brought to our attention," the department said.

"We take great pride in our investigations and are extremely disappointed that we were not able to uncover this information in that process. We endeavor to learn from this investigation to ensure it never happens again."

Gard said that the Lafayette Police Department would be looking into how it conducts background investigations but declined to elaborate further, saying that more detail would be shared at a news conference on Monday afternoon.

The Twitter user who flagged Zacharek to Lafayette police shared a link to a website containing leaked data from the Iron March forum, including user names, registered emails, public forum posts and more. The link shows a person thought to be Zacharek posting on the forum with the username "Panzerleiter."

In one post that appears to be from September 1, 2016, the person writes that they used to be a "garden variety conservative libertarian," but that "it wasn't until I started working as an EMT in the inner city that I openly questioned the view that all races are equal."

The person then went on to say in the post, "I am fully NatSoc," referring to National Socialism or Nazism. The person also said they joined the forum "to be part of a community of likeminded people with the same or similar worldview."