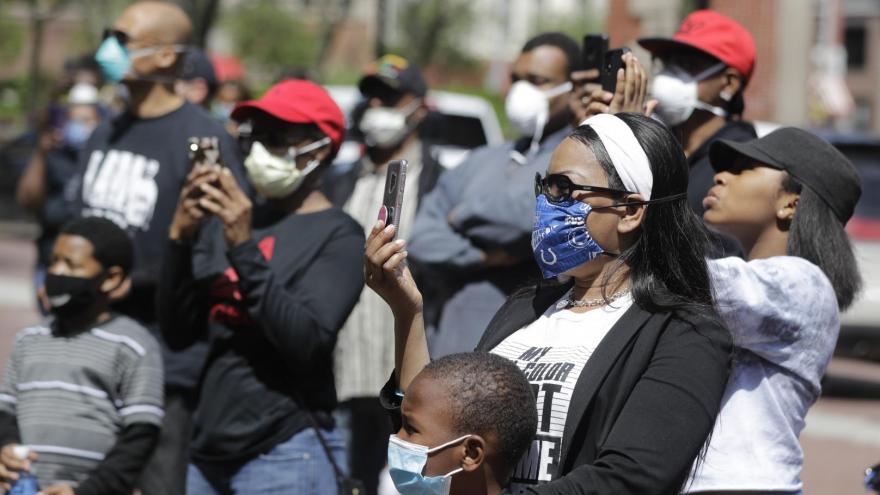 Protesters listen during a rally outside the City County Building in Indianapolis on Thursday.

(CNN) -- Indianapolis authorities are enlisting independent oversight of investigations into two officer-involved shootings this week, in what they say is an effort to calm the city's streets and regain community trust.

On Wednesday evening an officer shot and killed Dreasjon Reed after a high-speed pursuit. Hours after that shooting, police say officers were called to a burglary in progress at an apartment complex, where a man ambushed them, opening fire with a rifle. Four officers returned fire, killing the man, according to police.

Protests over the shootings formed by Thursday afternoon and continued into the evening, including two large demonstrations at police headquarters and at the scene of Reed's death, CNN affiliate WRTV reported.

Indianapolis Mayor Joe Hogsett announced on Twitter Friday that he had requested the US Attorney's Office and Federal Bureau of Investigation actively monitor the investigations of the incidents.

"Although my thoughts continue to be with all those impacted by these mournful moments, I also recognize that the actions of city leaders will speak far louder than words at a time when our streets are filled with passionate voices seeking change," the Mayor tweeted.

Hogsett said he still had confidence in Indianapolis Metropolitan Police Department Chief Randal Taylor and IMPD's ability to carry out fair and thorough investigations but that more needed to be done to provide community confidence in the outcome of those processes.

"We reaffirm our commitment to a transparent criminal and civil review of these incidents and the conduct of those officers involved," Mayor Hogsett added. "Importantly, it is my hope that our city may also reaffirm its dedication to channeling the sadness and anger felt by so many into displays of peaceful protest."

Prosecutor says police chief's role as witness could be conflict

Also on Friday, Marion County Prosecutor Ryan Mears requested an independent prosecutor be appointed for the investigation of Reed's death, according to a press release from his office. Police said both Reed and the officer are African American.

Mears said he believes Taylor's role as a material witness in the investigation is a conflict of interest for his office and an independent prosecutor is important "to avoid the appearance of impropriety in this matter."

The independent prosecutor would oversee and consult with IMPD throughout the investigative process, according to the statement from Mears.

"Many people in our community are experiencing pain as a result of what happened and the historic issues this brings up. As a community it is critically important that we take steps to ensure that we all appreciate the root cause of this pain, commit to bringing equity to the criminal justice system, and help heal these divisions," Mears said.

The officer involved in Reed's death has been placed on administrative leave while the incident is investigated, police said in a statement. "We have no reason to believe the officer acted out of turn," Taylor told reporters at Thursday's conference.

According to IMPD, officers located a firearm near Reed that appeared to match one he had posed with on social media.

"We are also aware of inappropriate comments made by an IMPD detective that was broadcast live on social media," Taylor said, adding that the comments came from a responding detective not involved in chase. Taylor said the department is pursuing disciplinary action against the detective who made the comments.

Taylor said the police department had worked hard to build bridges of trust with the community and they "recognize and are saddened this mutual trust that we so value has been eroded over the last 24 hours."

Reed's sister told WRTV that she had spoken to him while he broadcast over Facebook Live during the pursuit.

"He was talking to me on the live," Jazmine Reed told the station. "And he was like 'Sis I'm sorry.' And I'm like 'Brother what are you doing? We can't think for them.'"

Jazmine Reed said her brother had been in the wrong for starting the pursuit but that police could have handled their response differently.

"He definitely did not deserve to be shot like that," she told WRTV. "I know my brother didn't think they were going to shoot him down like that. He was scared. You hear him say it."

Protesters gathered at the scene of Reed's shooting with others spreading through the city Thursday, WRTV reported, with demonstrators calling for accountability.

"Black lives matter, they matter," one protester told the station. "So many people keep dying for this. Please, please, tell everyone."

In a statement, Greater Indianapolis NAACP Branch President Chrystal Ratcliffe called for the community to allow the process of investigating the shootings to proceed and to avoid protesting in large groups.

"With Covid-19 rampant in our community and the lack of sufficient testing and testing sites, we know that large gatherings will lead to more deaths in our community," Ratcliffe said in the statement. "We urge you to take to social media to express your feelings and find communities of like-minded people in a safe way."

Early Thursday, officers were called to burglary in progress at an apartment complex, where a man, later identified as McHale Rose, opened fire with a rifle, according to a police statement. Four officers returned fire, killing him, police said.

According to a police statement, a preliminary investigation determined that Rose had no connection with the address and there was no evidence of a break-in. None of the officers were injured and the four who returned fire were placed on administrative leave while the incident is investigated, police said.

"Preliminary evidence indicates the 911 call may have been made to lure officers into an ambush-style attack," the statement said.