INDIANAPOLIS (AP) — Indianapolis police say the search for a missing 8-month-old baby is being treated as a homicide investigation. 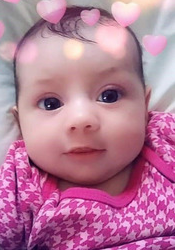 Chief Bryan Roach called a news conference Saturday and expressed frustration over a lack of cooperation from people who should be able to help authorities. He says he's "angry," a week after Amiah Robertson was reported missing by her family.

The chief says, "Somebody knows the whereabouts."

Police and volunteers have been searching along the White River in Indianapolis, based on certain items found along the bank.

Asked if he believes Amiah is alive, Lt. Bruce Smith says investigators "hope for the best" but can't ignore the fact that the baby can't take care of herself.