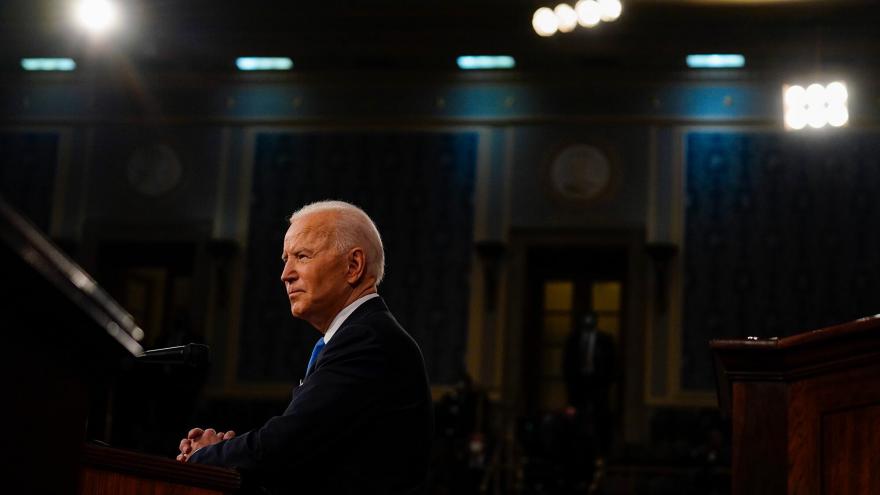 (CNN) -- President Joe Biden is on Capitol Hill on Friday afternoon meeting with Democrats, as congressional leaders scramble to secure a last-minute deal on a major economic package and find a way to resolve divisions between moderates and progressives that have put passage of the package and a separate bipartisan infrastructure bill in jeopardy.

Biden traveled to Capitol Hill in the afternoon to speak with members of the House Democratic Caucus, as Democratic leaders and White House officials labor to strike a deal on the economic framework that they hope can unlock enough votes for infrastructure. Two sources familiar with ongoing talks told CNN that a deal on the so-called framework of the economic package isn't finished or imminent at this current moment.

LIVE UPDATES: The latest on infrastructure negotiations in Congress

White House press secretary Jen Psaki said Biden wants "to make the case for his legislative agenda" and "speak directly to members, answer their questions, and make the case for why we should all work together to give the American people more breathing room."

The high-stakes visit to the Hill by the President comes as some Democrats have been calling for Biden to play a more active role in the process.

Democratic Rep. Steve Cohen of Tennessee said on Friday, "I think the President should be involved," and said "very few of us have seen the President in nine months he's been President. And I think he should come to a caucus."

It may be a quieter caucus meeting than others. Rep. Jackie Speier, a Democrat from California, told CNN that members decided as a caucus to place their cell phones in cubbies. The expectation is that will reduce leaks coming from the meeting.

Whether Biden's involvement will be able to change the dynamic or lead to any kind of a breakthrough remains to be seen. Divisions within the party were on full display Thursday evening when House Democratic leaders punted on a vote for the $1 trillion infrastructure bill as progressives revolted over the prospect of a vote and vowed to sink the bill. Progressives don't want to move forward with the bipartisan bill without a vote on the economic package, which could have a price tag of up to $3.5 trillion.

As of Friday, however, the path forward is still unclear, especially as progressives continue to say they need a Senate vote on the $3.5 trillion package to secure their support for the bipartisan infrastructure bill -- and some Democrats are starting to openly express frustration with the delay.

Moderates are irritated that there hasn't yet been a vote on the bipartisan bill after Democratic leaders promised one would take place.

Centrist Democratic Rep. Scott Peters of California gave voice to that sentiment, saying, "I feel frustrated. I want to vote today on this on this package." Reflecting the uncertainty on the Hill over what happens next, he said, "I don't know what's gonna happen."

Some progressives, meanwhile, have expressed frustration that they didn't know West Virginia Sen. Joe Manchin's topline negotiating position sooner so they could have started the negotiation process earlier. Manchin made clear Thursday that $1.5 trillion was the price tag he was willing to settle on for his party's plan to expand the social safety net, putting him $2 trillion away from the lowest number progressive Democrats have said they would accept.

Other Democrats, however, have shown more patience and have suggested it's good that talks are underway as they express optimism a deal will come together.

House Democratic caucus chairman Hakeem Jefferies said on Friday, "The speaker has indicated that we're going to vote today. I expect to vote today, and I expect that the bill will pass today. ... I'm hopeful that we'll get some clarity within the next hour or so from the Senate, as it relates to what they view as possible, so we can decide what is acceptable."

Meanwhile, Democrats are preparing a "Plan B" for the highway trust fund, which expired at midnight.

Rep. Mark Takano of California confirmed that House Transportation Chairman Peter DeFazio presented a plan to do a stopgap bill, and said he "presumes" a vote will happen today.

Leaving the House Democratic Caucus meeting this morning, DeFazio, an Oregon Democrat, wouldn't confirm to reporters if he announced a 30-day highway funding extension, but asked if Republicans could get on board with an extension, he replied, "I think if that were a solution, then they would."

Any kind of stopgap bill would need cooperation in both chambers to clear quickly.

Some senators have left town already, including key moderate Democratic Sen. Kyrsten Sinema of Arizona. Sinema left Washington and is in Phoenix, Arizona, for a medical appointment, according to a statement from her office. The statement said, however, that she is continuing negotiations remotely.