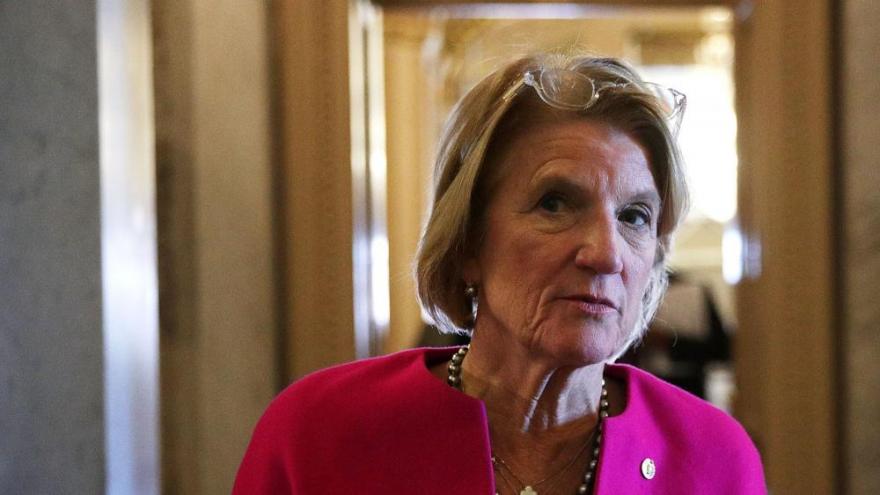 Republican led by Sen. Shelley Moore Capito pictured on Dec 1, 2017 in Washington, DC will introduce a counter proposal, with a price tag of $600 billion, focusing on infrastructure.

(CNN) -- The real work of finalizing an infrastructure package that can have widespread Democratic support on Capitol Hill is just beginning as the party must reckon with key differences between progressives and moderates on the scope and cost of the package -- as well as GOP lawmakers offering their own alternative.

While progressives are losing patience quickly with any discussion on bipartisanship, Democrats in the middle are still clinging to hopes that they can find consensus. The White House has invited key Republicans for discussions, but still GOP senators are slated to introduce an infrastructure proposal Thursday that is just a sliver of what President Joe Biden has suggested he wants.

How to read the Republican proposal

Republican senators led by Sen. Shelley Moore Capito of West Virginia are slated to introduce at noon ET Thursday a framework of their counter proposal, with a price tag in the neighborhood of $600 billion, focusing on roads, bridges and more traditional infrastructure.

Capito and Sen. Roger Wicker of Mississippi, the top Republican on the Commerce Committee, told CNN on Wednesday that the plan will be fully paid for by user fees and other offsets and won't raise taxes.

Aides familiar with this proposal point out it is meant to be an opening bid in a broader negotiation, not the final product. But $600 billion is far from the roughly $4 trillion proposal that the White House has floated and everyone acknowledges that significant concessions would have to be made on both sides to get anything that could pass in the middle.

The White House has already said it is committed to a much broader definition of infrastructure that includes programs to help bolster America's home care system, paid family leave and other benefits it believes will help rejuvenate the economy in the wake of the coronavirus pandemic. The fundamental differences on price tag and scope echo back to the negotiations over the Covid relief bill when Republicans offered a plan that was just a fraction of the $1.9 trillion that Democrats voted eventually landed on. Yes, there are a lot of levers that Democrats and Republicans could scale up or down to find a consensus in the middle, but it's not clear most Democrats have much appetite to pare back a package they are confident they could pass without a single Republican vote.

Right now there are several piecemeal infrastructure bills making their way through Congress.

Some of them -- like legislation to rebuild America's water system -- are bipartisan. The water bill is getting a vote as a test of bipartisanship and while it's not clear how or if it would be passed as a standalone bill and signed by the President or passed out of the Senate and then included in the larger infrastructure package, it's a good example of how Democrats are trying to show there is some bipartisan support out there for specific areas of infrastructure.

Expect the surface transportation bill, aka the "highway bill," to be another potential test for bipartisanship.

If it feels confusing ...

If it feels like negotiations surrounding infrastructure are amorphous right now, it's because they are. We are in the talking stage -- the ideas phase. If you are running a marathon, you are about on the third mile right now. There is a very long way to go and how this all shakes out is going to take time to play out. As one Democratic aide put it to CNN this week, "anyone who tells you they know how this all ends either is lying to you or deceiving themselves."

All the things that have not been decided

The other risk factors

In June, the House is expected to move to pass their appropriations bills out of committee. That process can take months. Negotiations with Republicans over the spending package will get into full swing in the summer.

One thing aides warn is that if the infrastructure package devolves into a partisan effort, it could potentially affect the goodwill in the spending talks and bring those must-pass negotiations to the brink. In other words, Congress has time to pass infrastructure, but it gets harder the longer these talks drag out and the closer we get to the spending deadline at the end of September.

Why reconciliation isn't easy either

Even if Democrats go-it-alone, the margins in the Senate are nonexistent. Senate Majority Leader Chuck Schumer has to hold his caucus together.

In the House, Pelosi will likely have a two or three vote margin depending on when they vote. That means from the green energy policy in the bill to the price tag, Democrats will have to be united to pass it. Right now, there are a myriad of issues that could derail them. Already, a handful of Democrats have drawn a line in the sand that they won't change one tax provision without getting rid of the $10,000 deduction on state and local taxes that was included in then-President Donald Trump's 2017 tax law.