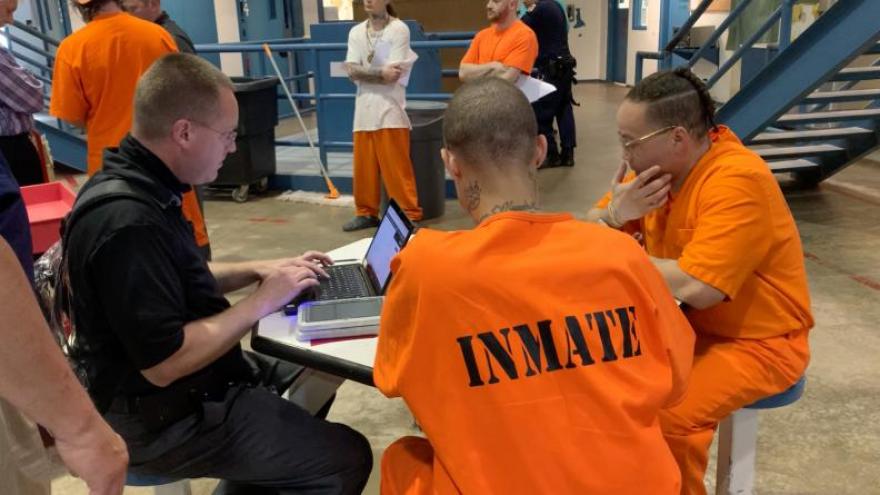 Inmates at the North Fork Correctional Center learn to use their tablets.

(CNN) -- Inmates in the Oklahoma Department of Corrections (ODOC) began receiving tablets this week as part of a plan to supply all state prisoners with secure tablet computers.

More than 21,000 inmates at over 20 facilities will receive tablets that will give them access to books, college classes, music and even a way to communicate with their families.

"The tablets represent a critical update to the communications and technology services we offer inmates here at the department of corrections," ODOC spokesman Justin Wolf told CNN. "This sort of technology shows how we interact with our inmates and allow them access to education, employment opportunities, and so much more."

The goal, according to ODOC, is to reduce the chance that an inmate will be incarcerated again following their release. The program is a partnership between ODOC and Securus Technologies, which provides technology services to correctional facilities.

Securus is one of several companies contracted by ODOC to provide inmates phone services, as Oklahoma has a bidding process to ensure the delivery of these services is done objectively. With that agreement, Securus provides other services including tablets to inmates.

The tablets come with a platform of more than half a million free books, access to legal books and documents, self-help resources and even phones that inmates can use to speak to family.

"If we don't spend time and energy investing in the tools to help these folks get the resources that they need, its unlikely we'll see change," Joanna Acocella, chief corporate affairs officer at Aventiv Technologies, parent company of Securus Technologies, told CNN.

"Education has been proven to be one of the most fundamental differences between someone who re-offends and returns and someone who does not," she said. "The last year with the pandemic taught us that we all need the opportunity to stay connected with what's important."

Many of the services will come with a price.

"Securus installs the tech and provides the platform and then charges for some of the premium content (like movies, TV and music downloads) and a fee for the communications," a Securus spokesperson told CNN.

The tablets are already in the hands of 2,500 inmates at the North Fork Correctional Center in Sayre. And the program will expand to include all state prisoners by October 2021.

Many features, including the phone and messaging service, will slowly roll out through the year as the inmates become accustomed to their tablets.

"It's pretty neat, I have never seen one. I've been gone 16 years," North Fork Correctional Center inmate Byron Robinson said in a video posted by ODOC. "It's endless. It's mind boggling really how much this thing can do."

The tablet connects to a secure private network, which won't allow the inmates to have access to the internet but will permit them to exchange electronic messages like emails.

With 32GB of storage, a 13-hour battery life, and a 1280 x 800 screen, the newest model of the tablet will also flag and alert staff to inappropriate use.

A catalyst for change

Michael Baldwin, a former inmate at the California Substance Abuse Treatment Facility in Corcoran, California, is one of over 300,000 incarcerated individuals across the United States who have used a Securus tablet.

For Baldwin, who was incarcerated for 26 years, getting the tablet "defined" the moment he decided to change his life, he says.

"That tablet reconnected me to my six children, all who grew up while I was in prison and all who I lost touch with," Baldwin told CNN. "I could write to them, but hearing back from them was difficult. I thought at first they didn't love me anymore, they didn't want me anymore, they didn't respect me anymore. But I found out they had improved their technology and I just didn't have access to them anymore."

As the technological world outside his prison cell continued to evolve, Baldwin says his children outgrew the traditional letters prisoners are use to receiving.

When he got a hold of a tablet, Baldwin immediately began sending out messages to his children.

"My son started texting me and sending me emails. It was like, 'Oh my God.' It really bought me life," he said. "They were able to send me videos, and I watched them over and over and over again. It inspired me to do everything in my power to be free again."

Along with his new-found connection with his family, Baldwin began to reconnect with the outside world. He listened to new music, read book after book and took part in educational programs.

While every incarcerated person at ODOC facilities will be given a tablet, it can be taken away depending on violations and behavioral issues, or if the tablet is used inappropriately, Wolf said.

The tablet, according to Baldwin, became an incentive for inmates to shun violence or else risk their tablet being confiscated.

"I saw first hand dudes that would normally feel disrespected, and immediately fight, walk from a situation because they didn't want to be disconnected from their tablet," he said. "That tablet was their relationship with their family, their freedom, their improvement."

After his release in 2018, Baldwin reunited with his family. He has started his own business in northern California. He credits much of his success to that small tablet he received all those years ago.

"This tablet is one of the things that will prove whether or not we're serious or faking about wanting to rehabilitate our nation's prisoners," Baldwin said. "If we really want to rehabilitate our inmate population, we will place these tablets in the hands of every single person that's incarcerated."