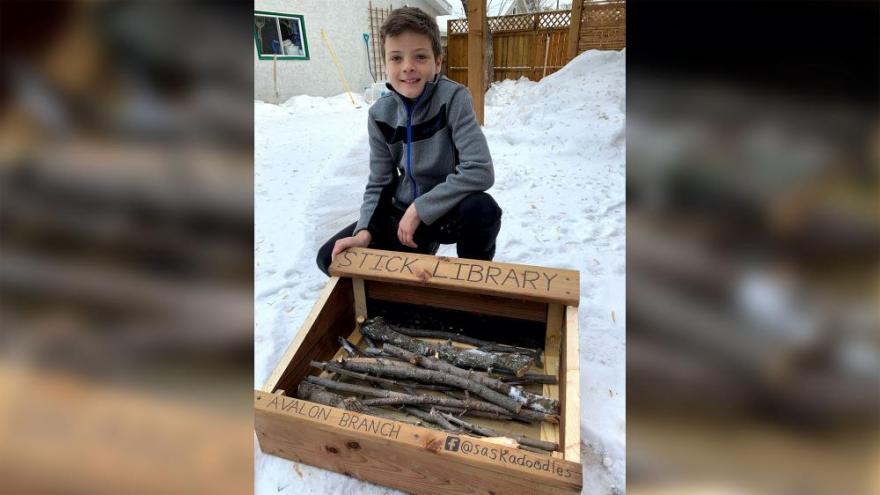 Jeremiah Carter with the stick library he built with his father, David Carter.

(CNN) -- For many families, trying to find fun activities during quarantine has been challenging. One Canadian father found the perfect project for his son to work on that will keep the neighborhood dogs entertained, too.

David Carter, an educator in Saskatchewan, Canada, realized he had to get creative in order to keep his 10-year-old son, Jeremiah, busy during quarantine.

"He likes doing sports, he's sports crazy, and he likes hanging out with his friends," Carter said. "And that hasn't been happening very much lately."

Every week, the family picks a night and they create something. Carter saw a post about someone in New Zealand who created a stick library -- a place to keep sticks for dogs that want to play fetch.

He decided building the library would be his next activity with his son.

"We had to do a lot of measuring and figuring to cut the wood and put it all together," Carter explained. "Plus Jeremiah got to use the power tools, which always makes it a good time."

The Carters are dog owners themselves. They have a 2-year-old Goldendoodle named Nala. David Carter said Nala is energetic when they take her to the dog park every day, which gave them more incentive to start this project.

After they finished building the stick library, they headed to a local dog park.

"We took it and zip tied it to the fence so it wouldn't disappear, we gathered sticks that we figured dogs would enjoy, and filled it up and waited to see what happened," Carter said.

He and Jeremiah were surprised when they came back to the park one day to see that the stick library was actually used.

"When we would go to the dog park, there would be no sticks in there, or lots of sticks lying around," Carter said.

According to Carter, his son has gotten a lot of satisfaction seeing people interact with the stick library.

"It seemed to make people happy and it's given him some enjoyment and a bit of purpose," Carter said.

Although the stick library is the first community project from the father-son duo, they're already planning to create another one to put at another dog park.

"It seems to be a good thing for the community," Carter said. "It can connect us in a way when we're not as connected as we normally are."