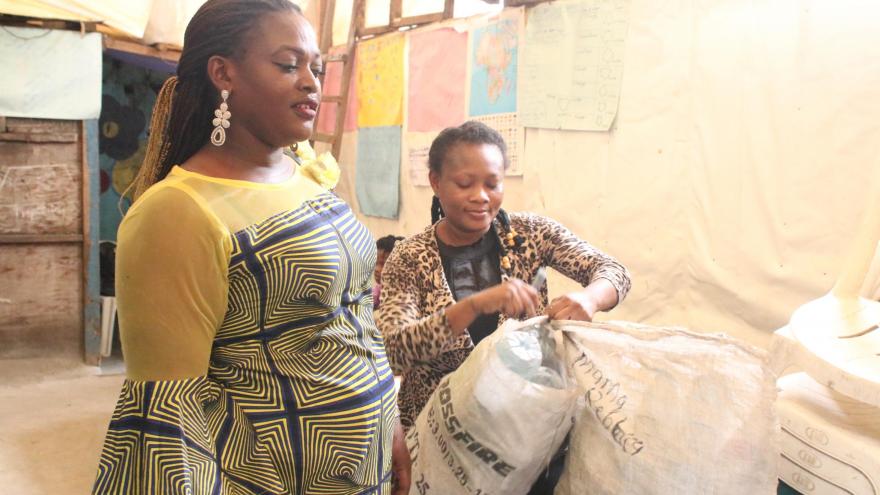 (CNN) -- Oriola Oluwaseyi, 32, makes her way through the busy streets of Ajegunle, a low-income community in Nigeria's commercial center, Lagos.

The Nigerian mother of four is pushing through people and things in the streets to collect plastic waste bottles from retail stores.

In the evening, Oluwaseyi will drop the bottles at Moritz International School where her 8-year old daughter, Rebecca attends primary school.

The bottles will act as down payment for her daughter's tuition.

As a petty trader earning a pittance from trading car engine oil at bustling Ajegunle market in Nigeria's economic capital, Lagos, Oluwaseyi does not earn enough to cover the annual 18,000 naira (around $50) school fees.

"Whenever a new session is about to commence, sometimes we get worried when there is no money, coupled with the challenges of taking care of the home," Oluwaseyi told CNN.

However, thanks to a recent partnership with Africa Cleanup Initiative (ACI), an NGO with focus on sustainability, Oluwaseyi's daughter's school, Morit International School, now accepts the plastic bottles, also known as PET bottles, in exchange for school fees.

Through a program called RecyclesPay, ACI collaborates with schools in low-income communities to allow parents who are unable to afford fees for their children to pay using plastic bottles they collect.

The cost of tuition is determined by how many PET bottles she has collected; for every 200 kilograms of recyclable bottles, Oluwaseyi can earn up to ₦4,000 (about $11) off the term's tuition of ₦7500 (about $24).

"My daughter's proprietor introduced me to this program last year, and I subscribed to the initiative because I knew it was something ... to relieve myself of the burden of spending money on the fees," she said."The program has given me leverage to channel the funds I would have spent on school fees, to buying of school bag, new pair of sandals and books for her," she added.

There are more than 450,000 megatons of plastic waste discarded in Lagos waters every year, according to reports in local media.

Nigeria generates huge amounts of plastic waste, and according to 2017 Ocean Atlas report, Nigeria is ranked number 11 in the world for plastic pollution, posing health risks to citizens and causing environmental damage.

Alexander Akhigbe, founder of ACI, says through the Recyclers Pay scheme he is providing solutions to Nigeria's environmental and climate issues.

So far, ACI has run its projects in five schools in Lagos and has reached more than 1,000 school children, he says.

"We are working on the deplorable state of the Nigerian environment and on the other hand improve education by using plastic bottles to substitute tuition fees so as to encourage parents to send their children to school and then save more money to fix other challenges at home," Akhigbe told CNN.

Nigeria has been tagged the poverty capital of the world, with 87 million Nigerians, around half of the country's population, living on less than $1.90 per day.

As a result, the country has an alarming rate of out of school children --10.5 million, the highest in the world, according to Unicef.

Akhigbe, 42, says he hopes to help reduce this number while also encouraging proper disposal of plastic.

Bottles collected from parents are sorted and compressed by Wecyclers, a social enterprise in Nigeria with a focus on waste collection.

ACI partnered with them to ensure that all PET bottles are converted to reusable materials.

"We ensure that we have recycling partners like Wecyclers in every location that we go to because of logistics. The way the model is designed, we come twice a month," Akhigbe, ACI founder said.

"Wecyclers buys each kilogram of this waste from us. The cash reward is not based on the quantity or size of bags brought by every parent, but by the weight after measuring," he added.

This initiative comes at a time where global attention is turning to climate change. And Leslie Adogame, executive director of SRADev Nigeria, a nonprofit think tank on environmental issues, describes the initiative as a 'pro-poor' strategy for plastic waste management.

"It's much more of economic potential with a huge environmental advantage, to conscientise Nigerians that anything recyclable is good for the environment because it generates income," Adogame told CNN.