Inside 'Project Airbridge,' the US effort to bring medical supplies from overseas 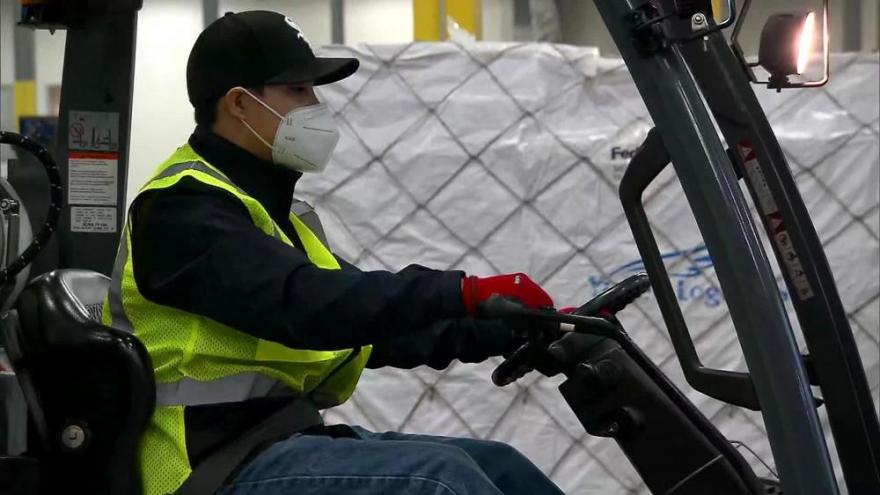 At the warehouse, a team of around 50 people moved quickly to remove tarps, take the individual boxes of items out of the larger packaging, combine the boxes, and move them to a trucking dock to ship them off to their next destination.

(CNN) -- When nearly 6 million face masks arrived at Medline's Chicago distribution center earlier this month, they had already traveled more than 7,000 miles to supply around 20 coronavirus hotspots around the country, including areas in Illinois, New York, Michigan, Louisiana and Washington.

The arrival of the items is part of the Trump administration's effort to expedite the shipment of supplies overseas, as the nation wrestles with a dire shortage of equipment in the face of a growing number of coronavirus cases and deaths.

The Federal Emergency Management Agency launched the endeavor, dubbed "Project Airbridge," in late March with six US distributors, including the company Medline. So far, millions of supplies, including gloves, surgical masks, surgical gowns, and face masks have arrived in the US on more than 70 flights -- earning praise from President Donald Trump, who's called it "an amazing success," and at times, criticism from governors who say the supplies should go directly to the states.

While the supplies are flown in by FEMA, the allocation of supplies is split between the administration's designated hotspots and the distributors' customers, some of whom might also be in those critical areas.

Medline provided CNN access to one of its third-party warehouses where cargo flown in on an Airbridge flight is broken down before being sent to a company distribution center.

On April 16, one of those shipments arrived at Chicago O'Hare International Airport on a FEMA-chartered flight, which average between $750,000 to $800,000 a flight. Within a 48-hour window, the products were cleared by customs, unloaded from the aircraft and arranged to send to a local warehouse to be organized.

At the warehouse, a team of around 50 people moved quickly to remove tarps, take the individual boxes of items out of the larger packaging, combine the boxes, and move them to a trucking dock to ship them off to their next destination.

From wheels down to delivery to a hospital, the process can take around three to seven days.

"One of the great benefits of Project Airbridge, I think, is that we're trying to leverage what the private sector does best and what the federal government can step in and do very well in a short time fashion," said Jesse Greenberg, public affairs director at Medline.

Even with the initiative in place, governors nationwide continue jockeying for critically needed equipment -- at times blasting the administration for not handing the supplies directly over to the states, instead of to customers within the state.

"What they are taking credit for, the White House, is that the distributors have customers in Illinois that they are sending goods to because those customers ordered those items of PPE, so that's a far cry from delivering to the states so that we can distribute," said Illinois Gov. J.B. Pritzker, a Democrat.

Trump said Thursday that Vice President Mike Pence is providing governors with a county breakdown of what's been received.

"This way the governor should know exactly what is being delivered through a private sector, supply chain within their states as well as through the Project Airbridge," he told reporters at a White House briefing.

The coalition of companies helping with the administration's so-called Airbridge effort cover more than 90-95% of the health systems in the US, according to a source familiar with the initiative.

Late last month, Medline's CEO Charlie Mills, along with senior executives of several other supply chain distributors, met with Trump and Pence to discuss the response to coronavirus.

At the time, the companies explained how they were getting supplies to the US. "We explained that one thing we don't own and operate is a fleet of cargo planes and so what we suggested was that on top of the cargo flights that we have arranged -- and that we continue to arrange and bring in on a weekly basis -- if the federal government wanted to arrange for cargo flight, we could bring additional PPE and other medical devices on top of what we're already bringing in," Greenberg said.

That's what "Project Airbridge" is now. FEMA covers the cost to fly supplies into the US, thereby expediting the shipment of supplies from major distributors. Critics say companies are profiting off the arrangement. Greenberg pushed back.

"I think one of the misconceptions out there is that a company like ours is somehow going gangbusters at the expense of this virus and that couldn't be farther than the truth," he said. "Prices have gone up. We're not passing any of those costs on to our customers. In fact, many of the items we handle, we're selling at a loss."

Greenberg said Medline is in frequent communication with the government about supplies.

The number of locations is frequently evolving, Greenberg added: "It's a dynamic list, it's growing, it's changing. That list is updated every day or every couple of days." The company reports back to FEMA when a delivery is made.

Despite repeated requests for specifics on where overseas supplies are delivered, FEMA has not provided details on allocation or prioritized hotspots.

Medline's shipment earlier this month was one of many. Among the states receiving supplies from that shipment are New Jersey, California, Washington, Illinois, New York, Michigan, and Louisiana.

The governors of those states are among the many clamoring for the administration to do more to ensure healthcare workers have the equipment they need to treat patients.

While "Project Airbridge" is not the only federal effort to shore up supplies -- the departments of Defense and Health and Human Services are also assisting -- the initiative is one of many tests of private and government partnership at a critical time.

"We're trying to do as much as humanly possible," Greenberg said. "And when we have a partner willing to help bring additional product, we can get to our customers and other health care facilities that are desperately in need."