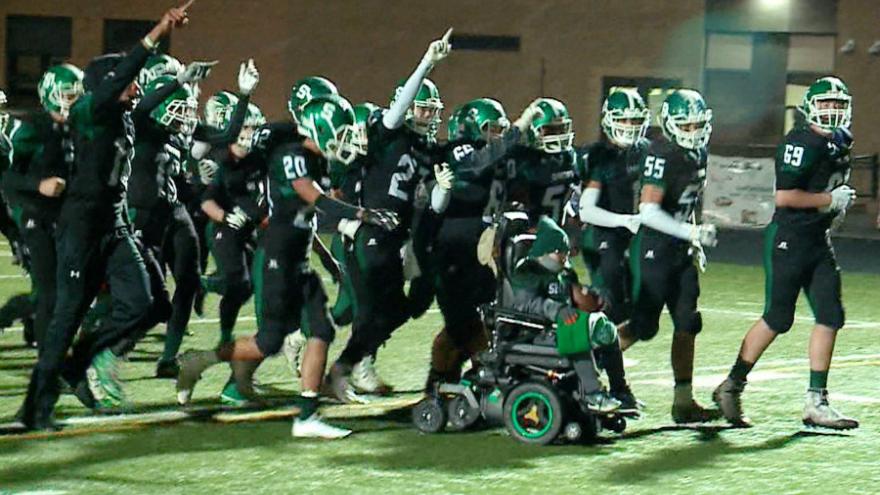 OAK LAWN, Ill. (WGN) -- With a 2-7 record, this football season failed to play out as the Oak Lawn Spartans hoped — but their spirits never wavered.

That's thanks in part to Anthony Golf, who provides positivity and motivation as the Spartans' honorary captain.

At age seven, Anthony was diagnosed with Duchenne Muscular Dystrophy. Doctors told the Golf family Anthony would be in a wheelchair by age 10, but he beat those odds by more than five years.

The disease also hasn’t stopped the Oak Lawn junior from taking Driver’s Education classes, aspiring to be a veterinarian technician, or being around the sport he loves as a member of the Spartans.

“He’s a big part of what we do, and we love having him around, and kids feed off the inspiration he provides,” said Oak Lawn head coach Nick Novak.

For the last home game of the season, coach Novak and the Spartans decided they wanted to do something extra special for Anthony. So they drew up the “Anthony Sweep.”

“We said, ‘hey lets get him a touchdown, start the game off by putting six points on the board,” Novak said. “We talked to Anthony and his dad and they were all for it. Anthony was so excited, and our kids were so excited for him.”

Before their game against Tinley Park, the team surprised Anthony with a personalized jersey with the number one. Then in the first play of the game, they called Anthony's number. He made his way onto the field, held the football tight and led his team into the end zone.

“It’s like one of those things you see on TV but never really hear about or see or do,” Swatek said. “To see him cross goal line, try to spike the ball. He was just so happy.”

The Spartans named Anthony player of the game. He left that night with a jersey, a signed team football, his first career touchdown, and a memory that could never be taken away. He said the chance to run on the field really made him feel special.

“It was cool that they did that, because I scored my first touchdown,” Anthony said during practice the following week. “I thought I was never going to run the ball ever.”

After Anthony told his dad it was the "happiest moment of his life," Tom Golf says he told him: "you can be anything in this world. Just because you are in a wheelchair doesn’t mean you can’t.”