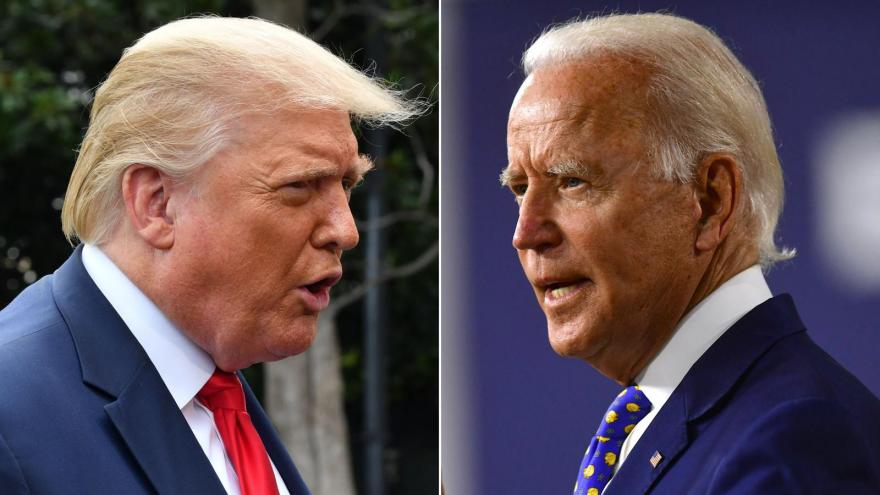 (CNN) -- The US intelligence community's top election security official said in a statement Friday that China "prefers" an outcome where President Donald Trump is not reelected in November and Russia is working to "denigrate" former Vice President Joe Biden's White House bid.

"We assess that China prefers that President Trump -- whom Beijing sees as unpredictable -- does not win reelection," said William R. Evanina, director of the National Counterintelligence and Security Center, in a statement updating the election threat landscape heading into the November election.

"China has been expanding its influence efforts ahead of November 2020 to shape the policy environment in the United States, pressure political figures it views as opposed to China's interests, and deflect and counter criticism of China."

"We assess that Russia is using a range of measures to primarily denigrate former Vice President Biden and what it sees as an anti-Russia 'establishment.' This is consistent with Moscow's public criticism of him when he was Vice President for his role in the Obama Administration's policies on Ukraine and its support for the anti-Putin opposition inside Russia," Evanina added.

Evanina also stated that Iran is seeking to "undermine US democratic institutions, President Trump, and to divide the country."

In essence, Evanina's statement Friday afternoon put two of the biggest American adversaries on opposite sides of the election: Russia for Trump and China for Biden.

The statement from the top counterintelligence official is also the clearest the intelligence community has been in suggesting Russia prefers one candidate over the other in the 2020 race.

At a news conference at his Bedminster, New Jersey, country club on Friday night, Trump appeared reluctant to accept the intelligence community findings.

Asked if he believes the intelligence, the President replied, "It could be. I mean it could be, very much."

Asked what he would do in response, Trump didn't offer a concrete action, saying, "Well, we're going to look at it very closely."

He continued his unfounded attacks against vote by mail, arguing that it's the "biggest risk" to election security and easy for a foreign power to forge ballots. There is no evidence of widespread voter fraud associated with vote by mail.

The prospect of interference in 2020 will further test US defenses against foreign meddling, which Trump has repeatedly downplayed as he has dismissed any suggestion that Kremlin influence played a role in his election.

Biden's campaign advisers have already discussed Evanina's assessment, according to one person familiar with the discussions. The team has specifically focused on the semantics of the statement as it relates to the former vice president, noting that Russia is unambiguously looking to "denigrate" Biden while China simply "prefers" a Trump defeat.

Evanina came under fire from Democratic leaders last month when he last issued a warning about efforts by Russia, China and Iran to interfere in the November election. Lawmakers claimed his statement did not go "nearly far enough" in providing the American public with information about foreign attempts to influence the election.

An official with the Office of the Director of National Intelligence told CNN that there's "no particular rank or order by which the threat actors are listed" in Evanina's statement.

"Each of these adversaries poses a threat to our election and it's imperative that we all work together as a nation to combat them," the official told CNN in a statement Friday.

The official said the assessments are the "most current, accurate, and objective election threat information the Intelligence Community has to offer in an unclassified setting at this time."

Senate Majority Leader Mitch McConnell said in a statement Friday that Evanina "makes clear" that "Russian malign influence efforts remain a significant threat," and added that it would be a "serious mistake to ignore the growing threats posed by China and Iran."

The head of the Cybersecurity and Infrastructure Security Agency (CISA), Christopher Krebs, praised the transparency of Evanina's statement — but specifically mentioned Russia and not the other countries by name.

"We have long said Russia and other nation-states are targeting our elections," Krebs said in a statement Friday. "We knew this to be true in 2016, we know it's true today and we know they will continue to attempt to interfere."

In a joint statement, the top Republican and Democrat on the Senate Intelligence Committee, Sens. Marco Rubio and Mark Warner, on Friday thanked Evanina for providing the additional information about the threats and encouraged the intelligence community to "continue to make this information available."

The two senators also called on "political leaders on all sides to refrain from weaponizing intelligence matters for political gain, as this only furthers the divisive aims of our adversaries."

But on Friday, the Biden and Trump campaigns responded to the news of Evanina's warning by volleying attacks at one another.

"Joe Biden, on the other hand, has led the fight against foreign interference for years, and has refused to accept any foreign materials intended to help him in this election -- something that Donald Trump and his campaign have repeatedly failed to do," Blinken said.

"In 2016 it was the Democrats who actively solicited help from foreign nationals in an unsuccessful effort to beat President Trump, and it wouldn't surprise anyone if Democrat operatives were once again up to no good. If anyone should face questions about foreign interference in 2020, it's Joe Biden's campaign," Murtaugh said.

In his statement Friday, Evanina said, "Many foreign actors have a preference for who wins the election, which they express through a range of overt and private statements; covert influence efforts are rarer."

In providing an example of Russia's attempts to "denigrate" Biden, Evanina accused pro-Russia Ukrainian parliamentarian Andriy Derkach of "spreading claims about corruption" to undermine Biden's candidacy and the Democratic Party.

Evanina also said some with ties to the Kremlin seek to boost Trump's candidacy on social media and Russian TV.

And China's public rhetoric over the past few months has grown "increasingly critical" of the Trump administration's coronavirus response, the recent closure of the Chinese consulate in Houston and actions related to Hong Kong, among other issues, Evanina noted.

"Beijing recognizes that all of these efforts might affect the presidential race," Evanina said.

Evanina's assessment comes two days after the release of a new report from the State Department that accused Russia of conducting a sophisticated disinformation and propaganda campaign, which uses a variety of approaches including Kremlin-aligned news sites to promote their agenda.

The report focused in particular on the Russian government's use of this network to push disinformation about the coronavirus pandemic as it spread across the globe. It did not mention Russian disinformation in the context of the 2020 US presidential election, however, as it falls outside of the mandate of the Department's Global Engagement Center (GEC), which focuses on foreign propaganda and disinformation aimed at foreign audiences.

This story has been updated with comments from Mitch McConnell.