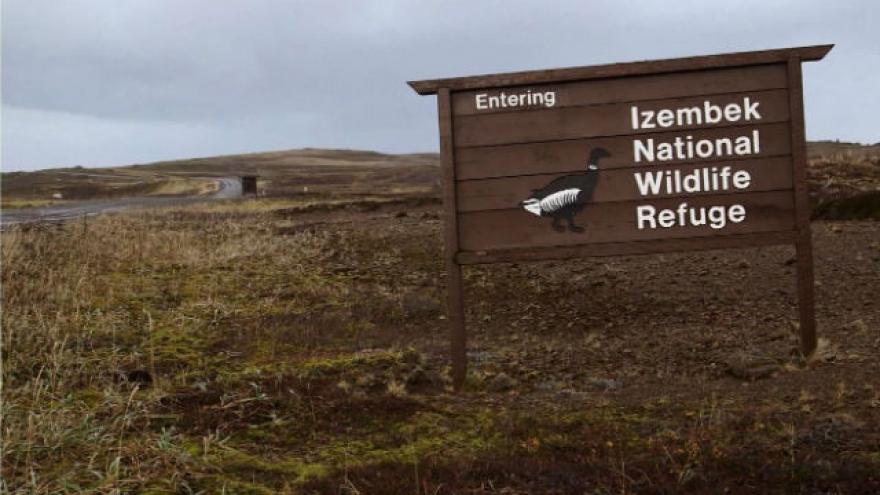 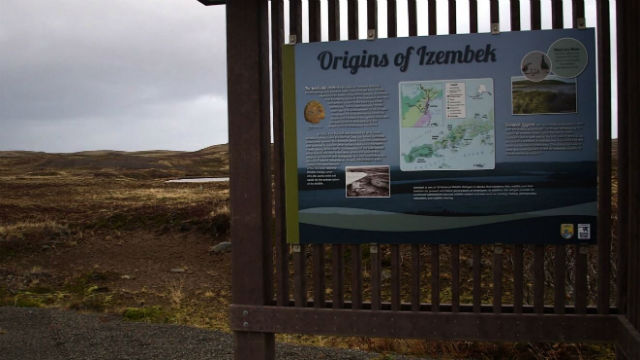 The Interior Department, led by Secretary Ryan Zinke, is pushing a plan that would -- for the first time -- allow a new road through a federally protected wilderness area, according to internal government emails. Photo courtesy CNN

(CNN) -- Far down the Alaskan peninsula, where it curves into the Bering Sea, lies the remote Izembek National Wildlife Refuge. The federally protected, 492-square-mile wilderness area is home to brown bears, caribou, wolves, and, once a year, the entire world population of black brant geese.

The Interior Department, led by Secretary Ryan Zinke, is pushing a plan that would -- for the first time -- allow a new road through a federally protected wilderness area, according to internal government emails. Local authorities say the road is needed to transport residents of the tiny, isolated city of King Cove to hospitals in the event of 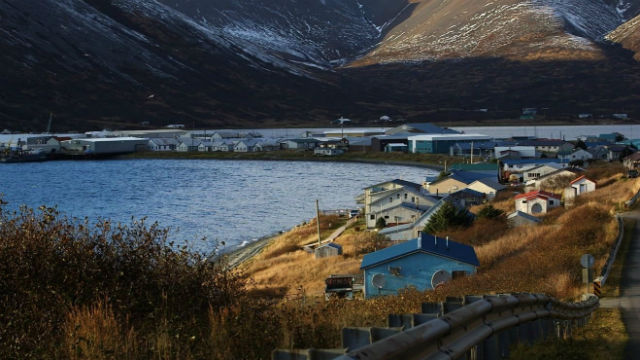 Local authorities say the road is needed to transport residents of the tiny, isolated city of King Cove to hospitals in the event of medical emergencies.Critics of the road, however, say it would be disastrous, not just for the Izembek refuge but in setting a precedent for construction in wilderness areas nationwide. CNN
medical emergencies.

Critics of the road, however, say it would be disastrous, not just for the Izembek refuge but in setting a precedent for construction in wilderness areas nationwide. They also cast doubt on the medical necessity of the project, pointing out that millions of dollars have already been poured into alternate means of transportation and that officials in past years pushed for the road to help the business operations of King Cove's primary employer, a Japanese-owned fish cannery.

The project would be the latest in what has been a series of environmental conservation rollbacks by the Interior Department under President Donald Trump. Zinke declined CNN's request for an interview. In an emailed response, Interior Department press secretary Heather Swift wrote, "The absence of the road has meant life-and-death for the inhabitants of King Cove. The careful construction of an 11-mile single lane gravel road in a manner that conforms with all applicable environmental laws, rules, and regulations ... makes sense."

For decades, King Cove residents have pressed officials for the road through the refuge as a bridge to the Cold Bay Airport, 11 miles away. Federal administrations always rejected the idea because wilderness areas are protected by law.

"Our ability to get back and forth safely -- that is what's important to this community," said Della Trumble, a local resident and spokeswoman for the King Cove (Native) Corporation, who has been fighting for the road for 35 years.

In an effort to solve the problem of King Cove's isolation without harming the refuge, federal officials steered some $50 million of taxpayer money to King Cove, for alternatives that included a hovercraft and a local clinic. But residents of King Cove still say the road is necessary for their safe passage in emergencies.

"A road through this critical area would kill the refuge, would kill the wilderness and the intent that was set aside when this was protected back in 1960 by President Dwight Eisenhower," said former US Secretary of the Interior Sally Jewell.

Jewell vetoed the road in 2013. "The building of the road and the transit on the road, the clearing of the road, is a significant disturbance for the species that were there," she said. "Over a number of years, the road basically would kill the value of this critical ecological reserve." She believes there are possible alternatives, including a ferry and improvements to the Cold Bay dock.

King Cove Mayor Henry Mack, a longtime champion for the road who has promoted it actively since his election in 2015, believes it will do no significant harm.

Mack and other proponents say older roads already cross the refuge, and one more would have no impact. But officials within the Fish and Wildlife Service, a division of the Interior Department, say there are no roads inside the wilderness section of the refuge, only a few old ruts or paths from World War II where motorized vehicles are not allowed.

Mack and Trumble say there have been at least 18 deaths from 1980 to 2003 that they can attribute to King Cove's isolation, either from planes crashing or because patients could not be medically evacuated, though no deaths have occurred in recent years.

"We want to be able to get to and from Cold Bay safely," said Trumble. "I watched my daughter's airplane crash land at this field. It's frightening sometimes just for people to travel."

Certainly, travel to and around the area can be harrowing, particularly in winter. On a visit to Cold Bay in October, a CNN team experienced that firsthand when an early blizzard rolled in, bringing 70 mph winds. Local commercial flights were canceled, and the only way to get to Cold Bay from King Cove was a charter flight with a skillful local pilot.

Though the road might offer an alternative for travel between the communities, critics say it could create dangers of its own.

"Construction of this road to ostensibly save lives, and for health and safety, in reality poses grave dangers," Dr. Peter Mjos wrote in a letter to Jewell in 2013. Mjos previously worked as a physician for the Indian Health Service and the US Public Health Service around Cold Bay and King Cove, and was medical director for the Eastern Aleutian Tribes. In the depths of winter, he wrote, "It is inconceivable that the proposed ... road could be passable. Any vehicle or ambulance attempting transit or rescue in such conditions could be suicidal, rescue impossible, rescuers gravely imperiled."

The conflict over the road has been a long one. In the '90s, Sens. Frank Murkowski and Ted Stevens and Rep. Don Young all pushed for the road; President Bill Clinton vetoed the bill. Ultimately Stevens and Young helped create a $37.5 million compromise, with funding for a relocated airstrip and a new King Cove clinic.

But King Cove officials eventually got rid of the hovercraft, which they found inefficient. They now estimate it would take another roughly $24 million to build the road through the refuge. For critics, that's a lot of money for a town with fewer than a thousand people.

They have also been skeptical because in the past, some officials have described the road as a way to help King Cove's Peter Pan Seafood company, owned by Maruha Nichiro Corp. in Japan. "The story has evolved over time to be about medical evacuations when it started about commercial purposes," Jewell said.

A 1994 King Cove city resolution stated the road would link "North America's largest salmon cannery in King Cove with one of the state's premier airports at Cold Bay."

A year later, former Gov. Tony Knowles said the road would be used for "transporting salmon" from King Cove to Cold Bay. An assemblyman with the Aleutians East Borough in 2010 also stated that the company would use the road to transport "fresh product," according to the Fish and Wildlife Service.

Local and state politicians first proposed the idea of a land swap to create the road between 2005 and 2009. Jewell's veto came after a four-year study determined it would cause irreversible damage to the refuge and the wildlife that depend on it.

Local officials sued. A federal district court ruled that the secretary did indeed have the authorization and jurisdiction to make her decision, and that she complied with the National Environmental Policy Act.

Bruce Babbitt, interior secretary under President Clinton, agreed with Jewell. In a 2014 op-ed for the Los Angeles Times, he called the road "a bad idea" and "a boondoggle."

But then came the 2016 election. Since the Department of the Interior came under Zinke's leadership in March 2017, the department has moved to reverse numerous conservation decisions made under the Obama administration, including the recently announced shrinking of two national monuments in Utah, the removal last March of a freeze on new coal leases on public lands, and the push to allow oil drilling and energy exploration in the Arctic National Wildlife refuge, which was included in the recent tax bill.

In April an email between fish and wildlife staffers indicated the road proposal was coming from the top. "The land exchange idea and 'push' is from the secretary's office," read the email. The email was first obtained through a Freedom of Information request filed by the advocacy group Defenders of Wildlife, and provided to CNN and other media.

In another email, sent June 20, a refuge staffer wrote about a survey on the road done by the state and authorized by the department: "the secretary would like to see folks on the ground doing the survey in the next couple days. He did not seem to (sic) excited about the direction that it was going out for public comment."

"The emails we obtained suggest undercover kind of attempts to ramrod through what they know is probably illegal," said Jamie Rappaport Clark, the president and CEO of Defenders of Wildlife. Rappaport is the former director of the US Fish and Wildlife Service, within the Department of the Interior.

The new push, Clark said, "certainly undermines past processes and past policies, and would overturn years of biological knowledge," on a national wildlife refuge "that was set aside for wildlife, not for a special interest."

"The documents suggest a complete reversal of numerous past administrations' decisions to not allow this road."

Proponents of the road believe Zinke has the authority to sign the deal. Clark said if that happens her organization will sue. "It will be challenged as illegal. It certainly is a huge reversal of policy."

Leaders at other national environmental groups were also dismayed by the prospect of the road, and of how the decision is being handled. They believe allowing a road through Izembek would set a precedent that could endanger other refuges and wilderness areas across the United States.

"I know of no deals or transactions that would ... allow anything like this in any wildlife refuge," said Geoff Haskett, former regional director of the US Fish and Wildlife Service in Alaska, and now president of the National Wildlife Refuge Association. "This is precedent-setting and very disturbing."

Mayor Mack and Della Trumble acknowledge that the Trump administration likely offers the road's best chance in decades. "We feel like this is the time, and we can only hope that we can finally put this to rest," said Trumble.

If Zinke signs the agreement to do the land exchange, a process would begin to more precisely define the lands for the swap and route of the road. City officials say they hope construction could begin by spring.

And they counter the notion that the interests of the fishery are what's driving the unusual swap. "I would fight to keep a heavy-laden truck full of salmon to get over to Cold Bay," Mack said. "I would not support it one bit."

In a statement to CNN, Peter Pan Seafood officials wrote the company "supports ... construction of a road. The primary reason for the road has always been safety."

Today, Alaska's politicians continue to support the road. They have been lobbied actively by the town, which along with its borough has spent over $1.7 million on lobbyists since 1999. Those lobbyists donated $59,800 to Rep. Don Young and $18,550 to US Sen. Lisa Murkowski. Murkowski and Young also received nearly $24,000 in donations from Peter Pan or its CEO, Barry Collier, since 1997.

Dan Sullivan, Alaska's junior senator, also approves of the road. Interior officials "have put the lives of birds over the lives of people," Sullivan said at a recent US Senate subcommittee hearing on the Coast Guard. "It's gotta stop. It's outrageous."

Both Murkowski and Young introduced bills this year to allow the road. Their offices told CNN the legislative efforts were not influenced by contributions, and that they support the road for medical evacuations.