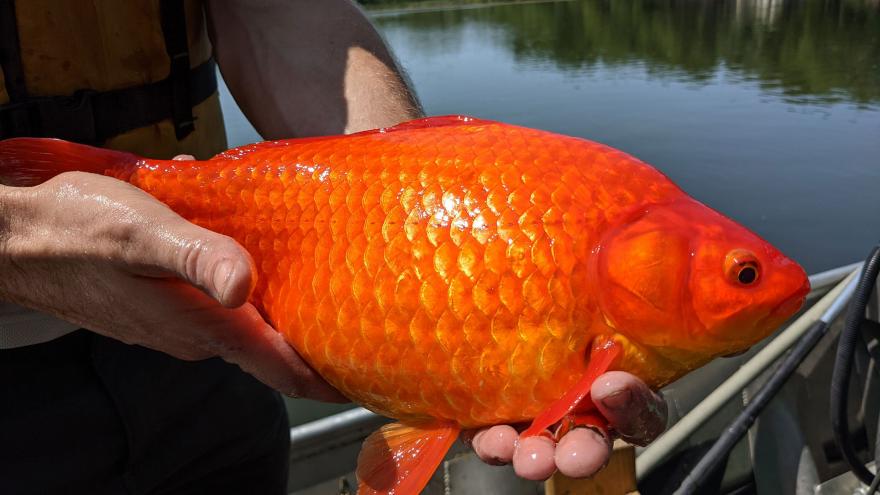 Freed goldfish can grow to the size of a football and contribute to poor water quality by uprooting plants and disturbing the sediment at the bottom of ponds and lakes. Credit: City of Burnsville
By David Williams, CNN

(CNN) -- The tiny goldfish you can pick up at pet store for a few cents might not look like an environmental threat, but they can grow into a huge problem if set free in lakes or ponds -- mainly because they can grow to be surprisingly huge.

Burnsville, Minnesota, which is south of Minneapolis, drew viral attention to the global issue when it posted pictures on social media of some of the whoppers that were caught during an ongoing survey of fish in Keller Lake. The city urged residents not to release their unwanted pet fish.

They caught 10 goldfish last week and another 18 this week -- each was more than a foot long, with the largest being 15 inches long and weighing about four pounds.

Burnsville natural resources specialist Caleb Ashling told CNN that the city partnered with neighboring Apple Valley and the company Carp Solutions to find out how many goldfish are in the lake.

"We had some reports from residents of some increasingly large groups of goldfish out on the lake," Ashling said. "Folks were seeing them from shore or if they were out kayaking, they would catch a glimpse of them when they were out in their boat."

He said some of the fish were the size of a football.

I knew that they were pretty good size, just from some previous information, but even knowing that, it was a bit surprising how giant some of these fish were," Ashling said. "So they're pretty big goldfish and not what you are used to if you're used to seeing pet store goldfish."

Goldfish root around on the bottom of lakes and ponds looking for food, which stirs up sediment and can uproot plants. This can impact water quality and the diversity of native species when the goldfish become established, said Carp Solutions owner Przemek Bajer, who is a research assistant professor at the University of Minnesota.

"Often, they don't eat aquatic plants, but the plants simply cannot establish roots in those lakes, they're just uprooted physically," Bajer said. "So if you have a lot of goldfish and carp in the lake, usually the first thing that happens is all the aquatic plants disappear."

The fish also kick up nutrients that had settled on the bottom and their waste that can promote algae blooms that "turn clear lakes into green lakes."

Goldfish are native to China and eastern Asia and have traveled the world, thanks to their popularity as pets and ornamental fish.

The US Geological Survey says that they've been established or reported in every US state, except Alaska, which eradicated a population of illegally-introduced goldfish in 2019 from a pond in Anchorage.

"All goldfish are invasive, basically worldwide," Bajer said. "In the whole of North America, Australia, parts of Europe, they are really, really widespread."

They are closely related to the common carp, which are another invasive, non-native species, Bajer said.

"It's most likely that somebody just released them, but they can reproduce in the wild, too," Bajer said. "We don't know if these particular ones were released by somebody or they were spawned out in the lake from parents that maybe were introduced by somebody."

Bajersaid the goldfish would have had to have been in the water for several years to reach that size.

He said they'll collect some fish for testing during a survey next week and will be able to tell exactly how old they are by looking at an inner ear bone that has growth rings, similar to a tree, that can be seen under a microscope.

Ashling said they've worked hard to improve the water quality at Keller Lake and the communities want to protect their investment. He said the cities will decide what to do next once Carp Solutions finishes its assessment of how many goldfish are in the lake.

"We know it's not good to have goldfish in the lake, but in some situations, goldfish can be in a lake and not be causing a lot of severe problems, but in the right lake in the right conditions they can cause a lot of problems," Ashling said. "So we're still in the process of trying to figure out what our situation is at Keller Lake.

Bajer said that goldfish and carp are omnivores and really like seeds, which is a little unusual for fish in North America. He said they could bait certain areas of the lake with cracked corn to attract the goldfish and then scoop them up in specialized nets without disrupting the native fish.

"Because goldfish are smart, they can quickly learn where the food is, and also because they are social animals. Once a few of them learn about the food, that information passes through the rest of the population."

Ashling says he hopes the attention the fish have gotten encourages residents to find a better home for their unwanted pets than Keller Lake.

"It seems like there are a lot of folks that don't realize how large they can get and some of these situations, and that there are some unintended environmental consequences to releasing goldfish or other types of pets into the wild," he said.

It's illegal to dump goldfish into the wild in Minnesota and many other states.

The US Fish and Wildlife Service said that some pet stores will take unwanted fish and that friends, relatives, aquarium clubs, schools or nursing homes might want to adopt them.