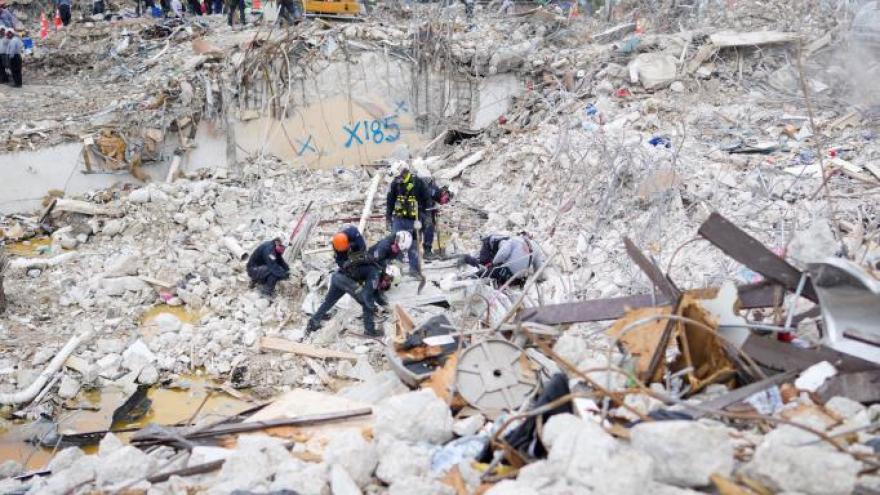 Task force members working at the residential building collapse site in Miami-Dade County, Florida are seen in this photo released by the Miami-Dade Fire Rescue on July 10.

(CNN) -- The Surfside community in Florida is anxious to learn what caused the condo building collapse that has killed at least 97 people, but a structural engineer said the investigation will not reach full force until search crews have finished their work.

The site is currently under the control of the Miami-Dade Police Department and is classified as a crime scene following the collapse on June 24, Allyn Kilsheimer, a structural engineer hired by the city, told CNN.

As of Sunday, 95 of the 97 victims recovered have been identified.

Miami-Dade County said last week that, moving forward, it will only be reporting the number of victims who have been identified, "out of respect for the families who are still waiting and to ensure we are reporting the most accurate possible numbers."

Officials vowed to continue the search until every loved one is found.

And while families and the community grieve the victims, some residents worry that whatever caused the collapse could happen to their building, too, Kilsheimer said.

The first night that he was on the scene, Kilsheimer, who also investigated the aftermath of the 9/11 attack on the Pentagon, said he had about 20 or 30 theories of possible triggers.

Since then, he eliminated some but added five or six more, he said, but won't be able to narrow it down while the search continues.

"Until they do their job, we can't go in to do samples of materials and take those samples and test them to understand what the various components of the building that came down was," he told CNN's Ana Cabrera.

This week, Florida State Attorney Katherine Fernandez Rundle acknowledged the "multiple requests by engineers and attorneys" to gain access to the site.

"Engineers from the federal agency National Institute of Standards and Technology (NIST) were deployed to Surfside with Congressional authority to gather evidence and determine how and why the Champlain South Tower collapsed. NIST is the fact-finding agency responsible for investigating building collapses such as the World Trade Center, much like the NTSB investigates plane crashes," Rundle said in a statement.

"We cannot forget that the scene and all the related materials are still under active investigation, preservation and examination, and as usual, law enforcement is in charge of the scene," Rundle noted.

"It is my understanding that once NIST, the Miami-Dade Fire Rescue and Miami-Dade Police Departments determine that it is safe and appropriate for others to gain access to the site, they will be permitted to do so under guidelines set forth by those agencies," Rundle said.

Crews: 'We are almost there'

Aside from brief weather and safety delays concerning the dangerous and unstable conditions at the collapse site, search crews have been working around-the-clock. As that work continues, casualties are still being determined.

On Saturday, officials named another person who died in the collapse. 36-year-old Theresa Velasquez was recovered from the rubble on July 8, according to Miami-Dade police.

Two additional victims were identified by police on Friday. 51-year-old Brad Cohen and 79-year-old Maria Popa were recovered on July 7 and July 9, respectively.

At least 22 million pounds of debris and concrete have been removed from the site, according to Miami-Dade County.

"On the original collapse site, we are almost at the bottom," Miami-Dade Police spokesperson Alvaro Zabaleta told CNN Thursday. "Does that mean we are almost done with the search? No. Until we clear the entire site and find no more human remains we are not done."

"We are almost there," Zabaleta added.