Investigators conducting searches in the case of Kristin Smart, a Cal Poly student who went missing in 1996 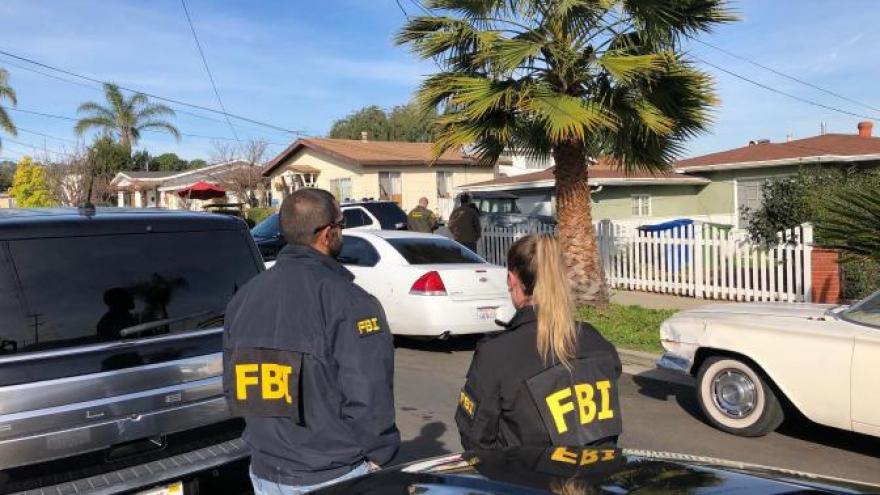 (CNN) -- Police have served search warrants in the case of Kristin Smart, a young woman who went missing from a central California college campus in 1996, but authorities and Smart's family are mum on what spurred the latest development in the case.

In San Pedro, the site of one of the searches, FBI agents and local sheriff's deputies were seen Wednesday entering and exiting the home of Paul Flores, who San Luis Obispo County Sheriff's Office spokesman Tony Cipolla identified as a person of interest and the last person to see Smart alive.

Because of the case's high-profile nature, the sheriff's office said it announced the search warrants to avoid the dissemination of misinformation.

The warrants have been sealed, it said, barring the department from providing details aside from the jurisdictions where they'll be served. Two searches will be conducted in San Luis Obispo County, one will be conducted in Los Angeles County and the fourth will be performed in Washington state, the sheriff's office said in a statement.

"This is an active and ongoing investigation," the statement said. "The sheriff's office will not be commenting any further, and no additional information will be released at this time, nor do we anticipate any additional news releases."

News of the warrants comes about two weeks after The Record newspaper in Stockton ran a story under the headline, "Could answers be coming in Kristin Smart's disappearance?"

Smart was from Stockton and the story quoted Smart's mother, Denise, saying the family had been contacted by an ex-FBI agent who told relatives to prepare for a break in the case.

"Be ready. This is really going to be something you don't expect. We want to give you the support you need," the mother recalled the former agent telling her. The agent provided no timeline, she told the paper.

The family later issued a statement saying that The Record's story was based on talks "between our family and a retired FBI agent who has provided guidance to us over the years."

"We support the sheriff department's efforts and commitment," the statement said. "It is vitally important that they take the necessary time required. To clarify an important point about timing, there is no current timeline for any announcement. When the sheriff's department completes the investigation, they will notify all of us when there is news to announce."

Through a spokesman, the family has said it will not grant interview requests. The FBI said last month it was not aware of any imminent announcement or development in the case.

"This is an ongoing investigation being led by the San Luis Obispo County sheriff's department. We are providing resources, as we have throughout this case," bureau spokeswoman Laura Eimiller told CNN.

Past leads didn't pan out

Smart, who would've turned 43 this month, was a 19-year-old freshman when she disappeared May 25, 1996, after she and other students walked home from a fraternity party.

She was last seen near her dorm, police said, but she never made it to her room. Friends and family never heard from her again, authorities said.

She did not have identification, money or extra clothing when she disappeared, police said.

A massive search and repeated interviews with a student who walked with her that night yielded no breaks, and Smart was declared dead in 2002.

In 2016, following leads indicating her body was buried on campus, the FBI flew in three cadaver dogs from its Quantico, Virginia, training facility and investigators dug up part of the hillside near where the school's trademark "P" is embedded, to no avail.

Last month, the sheriff's office said it was working the case and provided a list of its efforts since 2011, when the present administration took the helm, including: performing 18 searches at nine locations; submitting 37 pieces of evidence for DNA testing; recovering "140 new items of evidence";" and conducting 91 interviews.

The department has spent $62,000 and invested 7,500 man-hours on the case since 2011, it said. Investigators also confirmed that they are holding two trucks in evidence that belonged to family members of Flores, the person of interest.