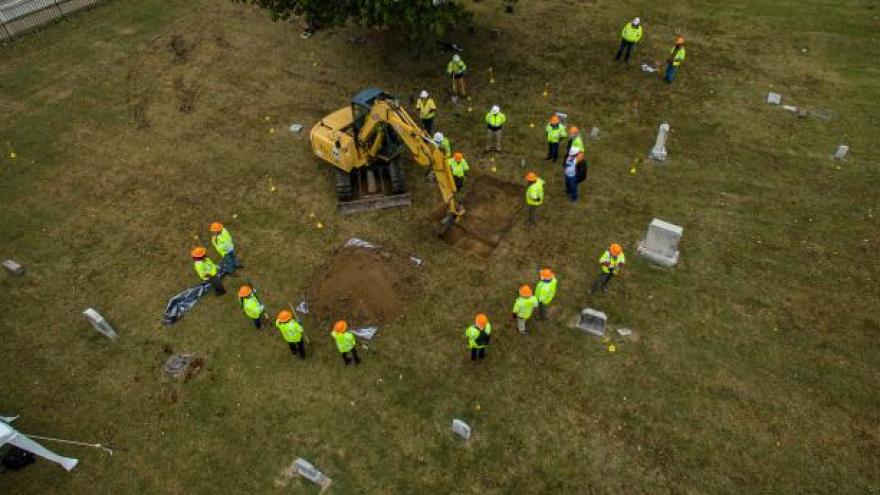 Investigators have made multiple discoveries this week after an unsuccesful excavation in July.

(CNN) -- A mass grave was found this week in the cemetery where archeologists have been searching for victims of the 1921 Tulsa race massacre, an Oklahoma state archaeologist announced Wednesday.

The outlines of at least 10 coffins were found at the Oaklawn Cemetery in Tulsa, Oklahoma, and state archaeologist Kary Stackelbeck said she has a "high degree of confidence that this is one of the locations that we have been looking for." But she said investigators are remaining cautious because they have not done anything to expose the human remains.

Since the excavation resumed Monday, archeologists had found one set of human remains and a possible second set.

But investigators have not confirmed whether any of the remains belong to the victims of the 1921 massacre.

"We still have a lot of work to do to identify the nature of that mass grave and identify who is in it, but what we do know, as of today, is that there is a mass grave in Oaklawn Cemetery where we have no record of anyone being buried," Tulsa Mayor G.T. Bynum said Wednesday in a news conference.

Brenda Alford, a descendant of 1921 massacre survivors, said in a news conference that she was very pleased with the progress of the search.

"We basically are thinking of our loved ones, our community members who lost their lives very, very tragically," said Brenda Alford, who is also the chair of the investigation's public oversight committee. "I am just very appreciative of all the hard work that is going into finding our truth, to again bring some sense of justice and healing to our community."

City officials launched an effort to find the victims' remains in 2018. An excavation in another area of the cemetery in July yielded no results.

This week's search focused on two additional areas of the cemetery, including an areas known as "Original 18." Funeral home records and other documents show at least 18 identified and unidentified victims were buried in the cemetery, city officials said.

As many as 300 people were killed in the massacre

The Tulsa race riot of 1921, also called the Tulsa race massacre, resulted in the death of hundreds of African American residents of the city's Greenwood district -- then a Black economic hub also known as Black Wall Street -- when a mob of White rioters looted and burned the community.

The riots were sparked by a confrontation between a Black resident and a White man among a group of angry White people demanding the lynching of a young Black man, according to historic accounts. A struggle ensued over the White man's gun and the White man was shot, prompting a mob that stormed the neighborhood.

Historians believe as many as 300 people died after more than 1,000 homes were burned and destroyed. At the end of the violence, Black Wall Street was decimated. Historical photos show bodies of Black residents lying in the streets.

Bodies were buried by strangers in mass graves while the victims' families were detained under martial law, Scott Ellsworth, a University of Michigan historian who has worked on the recovery of the Tulsa riot graves for decades, said in December.

Families were never told whether their loved ones died or where they were buried, and there weren't any funerals, he added.

Bynum said earlier this year that the search for remains is intended to fill gaps in the city's history and provide "healing and justice to our community."