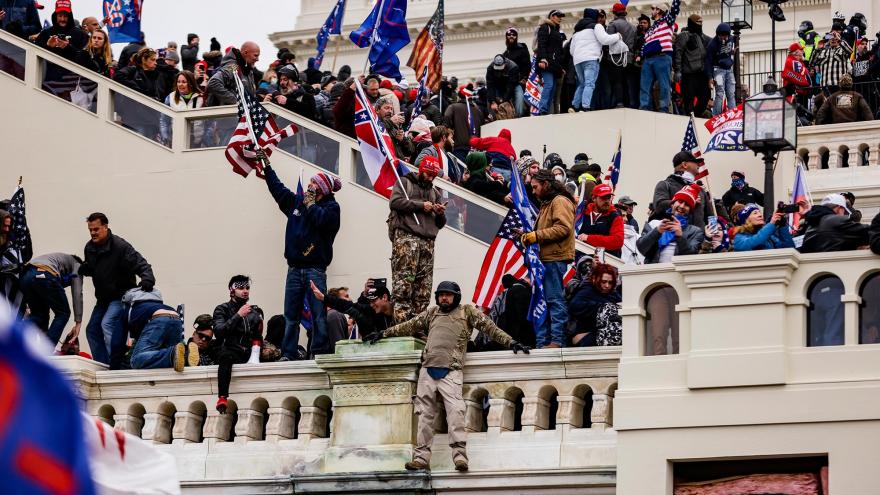 (CNN) -- Evidence uncovered so far, including weapons and tactics seen on surveillance video, suggests a level of planning that has led investigators to believe the attack on the US Capitol was not just a protest that spiraled out of control, a federal law enforcement official says.

Among the evidence the FBI is examining are indications that some participants at the Trump rally at the Ellipse, outside the White House, left the event early, perhaps to retrieve items to be used in the assault on the Capitol.

A team of investigators and prosecutors are also focused on the command and control aspect of the attack, looking at travel and communications records to determine if they can build a case that is similar to a counterterrorism investigation, the official said.

The belief, early in the probe, will demand significant investigation.

The presence of corruption prosecutors and agents is in part because of their expertise in financial investigations. "We are following the money," the official said.

By Wednesday morning, the FBI reported that it had received more than 126,000 digital tips from the public regarding the attack on the Capitol -- more than three times the number of tips received on Monday.

At least some of the arrests already made are part of a strategy used in counterterrorism investigations, to find even a minimal charge and try to take a person of concern off the streets. That helps ease the possible threat amid concern about possible attacks on the inauguration, officials believe.

On January 4, for example, local police arrested the leader of the Proud Boys, Henry "Enrique" Tarrio, in Washington, DC.

Tarrio was taken into custody for allegedly burning a Black Lives Matter banner taken from a Black church last month during protests in the city after an earlier "Stop the Steal" rally. The Miami resident was charged with destruction of property related to the banner, however, federal authorities say they found Tarrio in possession of two high-capacity firearm magazines, prompting them to add a charge of Possession of High Capacity Feeding Device.

On Tuesday, federal authorities in New York City arrested Eduard Florea, 40, on at least one weapons charge after law enforcement, including the FBI and NYPD, responded to a Queens home in response to online postings about an armed caravan heading to the US Capitol, two law enforcement officials with knowledge of the investigation tells CNN.

Law enforcement sources told CNN that the man claims to be a Proud Boy and was arrested with live ammunition in the home.

Already, the public efforts by prosecutors and the FBI to encourage people who participated In the riot to turn themselves in is yielding fruit. Some attorneys have reached out to arrange for safe surrender of their clients in order to gain a measure of leniency and lessen the chance of a police raid on their homes, two officials said.

For instance, a counterterrorism prosecutor even appeared in court for an early hearing for one of the defendants on Tuesday, signaling how integrated the Justice Department's effort already is between the typical criminal prosecutors who handle initial criminal hearings and with the units focused on more complex crimes.

"With this strike force that was established to focus strictly on sedition charges, we're looking at in treating this just like a significant international counterterrorism or counterintelligence operation," DC US Attorney Michael Sherwin said Tuesday.

"We're looking at everything: money, travel records. Looking at disposition, movement, communication records. So no resource related to the FBI, or the US Attorney's Office will be unchecked in terms of trying to determine exactly if there was a command and control how it operated and how they executed these, these activities."