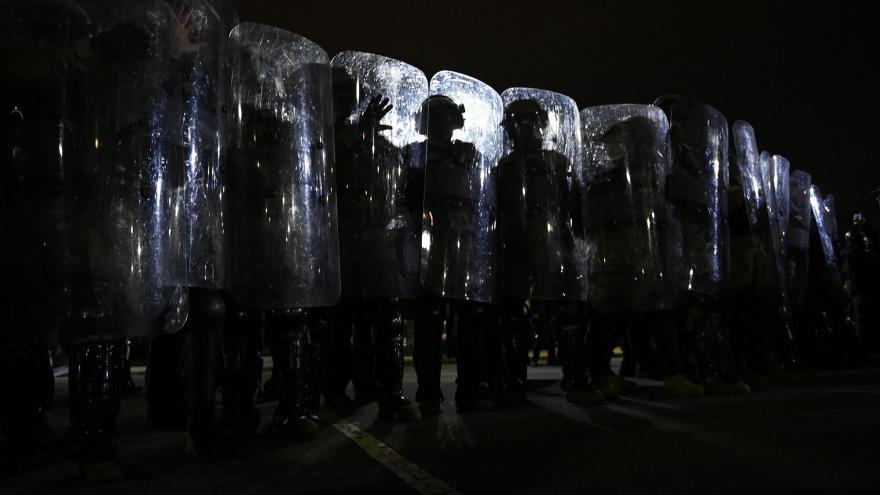 (CNN) -- Investigators have recommended that prosecutors decline to bring charges against a US Capitol Police officer in the shooting of a pro-Trump rioter who was killed during the insurrection, according to people familiar with the matter.

The shooting of the Capitol rioter, Ashli Babbitt, remains under investigation by the DC Metropolitan Police, the US Attorney's Office in Washington, DC, and civil rights prosecutors, a routine process for shootings involving the Capitol Police. A final decision hasn't been made, the people familiar with the probe told CNN.

Justice Department officials could make a final decision in the coming days.

A spokesperson for DC's Metropolitan Police Department said in an email to CNN that "it is irresponsible to make an investigatory assumption or to jump to any conclusion without completing the thorough investigation." CNN has reached out to the US Attorney's Office in DC for comment. The Wall Street Journal was first to report on the recommendation.

"In every analysis, this was an absolutely justified use of force," said the officer's attorney, Mark Schamel, of Lowenstein Sandler.

Babbitt's fatal shooting on January 6 occurred as a crowd pushed toward a doorway -- barricaded by chairs and guarded by Capitol Police -- that was the entrance to the Speaker's Lobby in the US Capitol building. Babbitt was given medical assistance immediately and taken to a hospital, where she was pronounced dead.

Officers at the scene have told investigators that shortly after the officer shot Babbitt, they heard radio traffic indicating that shots had been fired inside the Capitol, according to people familiar with the probe. That report later proved to be erroneous and officers now believe it may have been the sound of glass breaking.

In a new federal criminal case announced against a man at the front of the crowd when Babbitt was shot, prosecutors pieced together how the crowd had threatened police minutes before the shooting.

The new charges against Zachary Jodan Alam offer the clearest portrait yet in court of the circumstances around Babbitt's shooting, though graphic video of the violence and her falling has been publicly available since shortly after the siege.

Alam allegedly punched and kicked the glass panels of the closed doors, tried to smash it with a helmet, pushed himself against an officer and shouted in the faces of officers "f**k the blue." After Alam smashed a window, Babbitt was shot, according to a new affidavit from the FBI used to support Alam's charges.

Alam backed away after Babbitt was shot, prosecutors say. He was arrested during the weekend in eastern Pennsylvania, the Justice Department said on Monday.

Alam did not have an attorney listed to represent him as of Monday night and could not be reached for comment by CNN, as he was in jail after his arrest.

Babbitt was an ardent Trump supporter who held strong political views, her mother previously told CNN, and was "passionate enough to die for what she believed in."

A frequent attendee of pro-Trump rallies, she flew to Washington, DC, from San Diego, California, with the intent to participate in the protest, her mother said.

Babbitt served as a senior airman in the US Air Force from 2004 to 2008 under the name Ashli Elizabeth McEntee, according to military records. She was a member of the Air Force Reserve from 2008 to 2010 and was in the Air National Guard from 2010 until November 2016, records show.