Investors love electric cars. They're starting to like Volkswagen, too 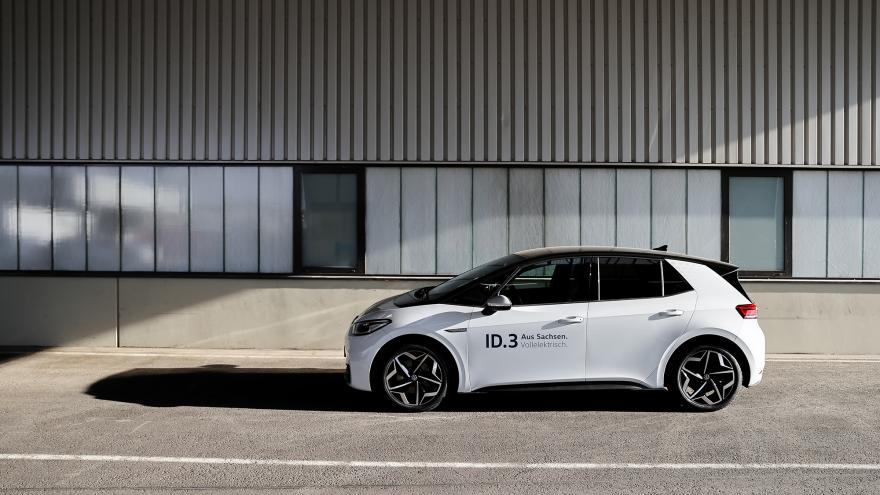 (CNN) -- A lot can change in a week. Just ask Volkswagen.

Europe's largest carmaker was nobody's idea of a trendy stock a week ago. Then CEO Herbert Diess unveiled plans on Monday to open six battery-making "gigafactories" in Europe by 2030.

Volkswagen went even further on Tuesday, saying it would sell more than 2 million electric vehicles by 2025, hire 6,500 coding experts over the next five years, launch its own operating system and become Europe's second biggest software company behind SAP.

It was quite the flurry of announcements, and it resonated with investors: Volkswagen's main shares in Frankfurt increased by nearly 20% last week, bringing its 2021 gains to 45%. Meanwhile its less-liquid ordinary shares are up 65%, even with a sharp decline on Friday.

US retail traders got in on the action, too, sending the company's thinly traded American depositary receipts (ADR) up dramatically. ADRs allow investors to buy and sell foreign stocks on US exchanges.

Volkswagen has been clear about the huge scale of its electric ambitions — it's investing €35 billion ($42 billion) in the technology — which makes the timing of the stock surge difficult to fully explain.

Call it the Tesla effect: The electric carmaker run by Elon Musk has a market value of roughly $625 billion, compared to $170 billion for Volkswagen. Tesla sold around 500,000 cars last year, while Volkswagen delivered 9.3 million.

But Volkswagen is now becoming more like Tesla in the ways that investors care about most. Tesla could be matched sale-for-sale by Volkswagen as early as 2022, according to analysts at UBS, who predict the owner of Audi and Porsche will go on to sell 300,000 more electric vehicles than Tesla in 2025.

Volkswagen's tech ambitions matter even more. It is pushing hard to upgrade its software capabilities and revealed announced this month that the first wireless updates are coming to the ID.3 this summer.

Diess is even behaving a bit more like Musk. The German CEO has joined Twitter, and his presentations to investors and the media are starting to have a very "tech startup" feel to them, with slickly designed decks.

UBS analysts told reporters last week that investors have failed to appreciate the speed at which Volkswagen is gaining ground on Tesla.

"We have more confidence than ever that Volkswagen will deliver the unique combination of volume growth, making them the world's largest [electric] carmaker, together with Tesla, as soon as next year," UBS analyst Patrick Hummel said recently, "while their margins will be stable or even grow from here. That is something that is totally unappreciated."

Investors are taking a second look at other traditional automakers, too. Shares of both General Motors and Ford have gained roughly 45% so far this year as executives have unveiled more details about their electric ambitions.

Volkswagen, General Motors and Ford are good examples of established companies finding new ways of doing business in the face of huge changes caused by the climate crisis.

"Gasoline demand is unlikely to return to 2019 levels, as efficiency gains and the shift to electric vehicles eclipse robust mobility growth in the developing world," the IEA said in a report.

What will we learn from GameStop earnings?

It's been a wild start to the year for GameStop.

The embattled retailer was at the center of a trading frenzy in January sparked by retail traders on the Reddit forum WallStreetBets.  Redditors cheered as GameStop soared. They posted diamond emojis (a reference to holding a stock long term) and titles like "NEXT STOP IS THE MOON BABY" with rocket emojis, representing a belief that the stock will continue its upward trajectory.

Here's the thing: Some of these traders invested in GameStop because they wanted to punish hedge funds who were betting the stock would fall. But others believed the company is undervalued, and could benefit from surging interest during the pandemic in video games and new consoles.

GameStop will report its results for the fourth quarter and 2020 fiscal year after the closing bell on Tuesday. It will host an investor conference call at 5:00 pm ET the same day.

Will the results hint at a rebound? That's unclear. But do the results matter to the Reddit crowd? Also unclear.