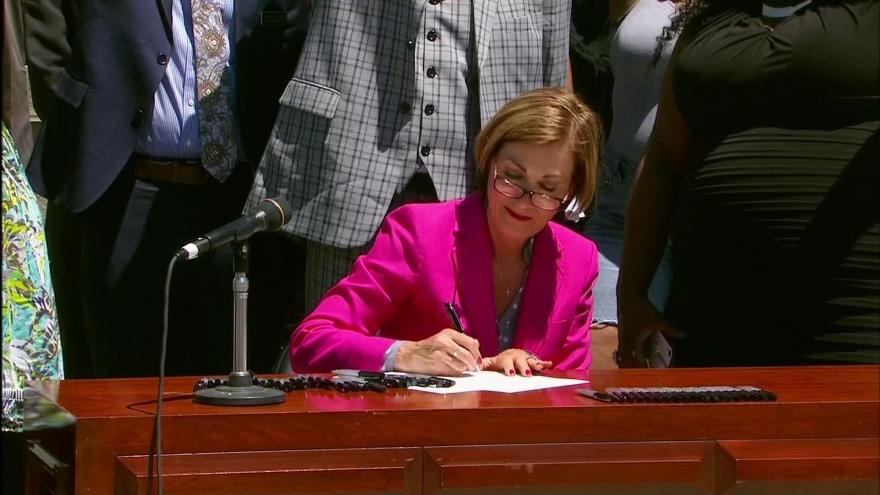 (CNN) -- Iowa Gov. Kim Reynolds on Wednesday signed an executive order that automatically reinstates the voting rights of Iowans who have completed their felony sentences, excluding those convicted for homicide.

"When someone serves their sentence and pays the price our justice system has set for their crime, they should have their right to vote restored automatically, plain and simple," said the Republican governor at the state capitol in Des Moines.

Reynolds said her executive order requires Iowans to "complete any prison probation, or parole, or special sentence" before they can register to vote. Reynolds said those who committed felony homicide offenses, including murder and manslaughter, will still have to individually apply for restoration.

"This is a cause on which so many Iowans have worked on," Reynolds said, standing alongside legislators and local leaders.

Iowa was the only state with a lifetime ban on voting for convicted felons unless they appealed to the governor and were granted restoration.

Reynolds said during the signing ceremony that the executive order is a temporary solution that could be changed by the next governor.

Former Iowa Gov. Tom Vilsack, a Democrat, had issued an executive order in 2005 to restore voting rights for residents who completed their sentences. His decision was reversed in 2011 by his successor, Republican Gov. Terry Branstad.

Reynolds on Wednesday reiterated her call for a "permanent solution," saying that she will continue to push for an amendment to the Iowa constitution.

"Let me be clear: an executive order is, at best, a temporary solution. It can be changed with a stroke of a pen by the next governor, which is not good enough," Reynolds said. "Something that is fundamentally right should not be based on benevolence of a single elected official."

The Iowa state legislature this session had failed to pass a joint resolution that would allow for a constitutional amendment that would restore voting rights to certain people with convictions.

The governor said in June she would sign an executive order after facing pressure from state advocates and Des Moines Black Lives Matter activists, who wanted the governor to take action before the November election.

Democratic state Rep. Ako Abdul-Samad, one of Iowa's few Black lawmakers, thanked Reynolds for "taking a stand" on the issue and called the action a "tribute" to the legacy of the late civil rights icon and Georgia Rep. John Lewis.

"This comes at a time where this is seriously a tribute to the legacy of Congressman Lewis," Abdul-Samad said.

In 2016, an estimated 52,000 Iowans were disenfranchised due to a felony conviction, according to a 2016 report from The Sentencing Project.

Mark Stringer, the executive director of the American Civil Liberties Union of Iowa, said Wednesday that while the ACLU Iowa is "relieved" that Reynolds' executive order does not require an individual to pay off fines, fees and restitution to be eligible to vote, it is "disappointed" that the executive order left out the individuals who served their sentences for various forms of homicide.

He also advocated for a constitutional amendment.

"While we're delighted that immediately so many Iowans are eligible to register and vote, it's important that we continue to pursue a more permanent fix to the problem of felony disenfranchisement in our state," Stringer said.