Iowa is changing its caucus rules for 2020 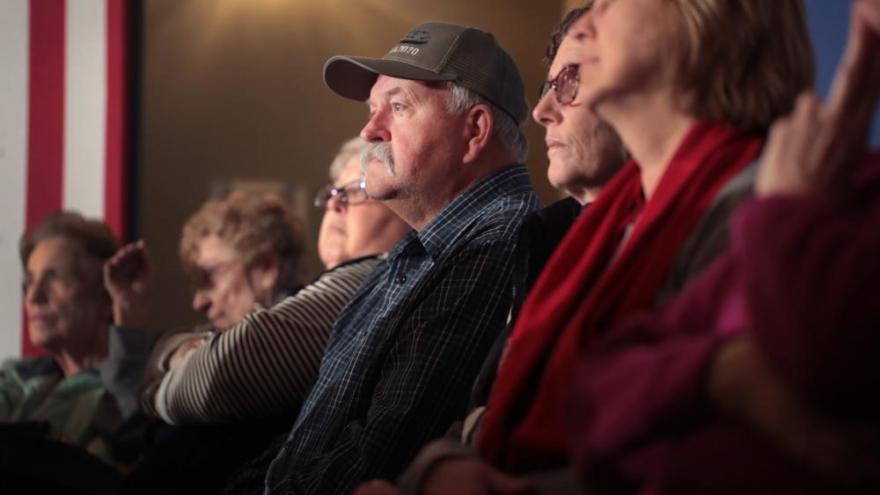 New rules and procedures will change how the caucuses are conducted and what is reported. Guests listen as Democratic presidential candidate former vice president Joe Biden speaks during a campaign stop on December 21, 2019 in Ottumwa, Iowa.

(CNN) -- Iowans cast the first major votes of 2020 in a week during the state's caucuses.

Unlike a traditional primary, in which voters cast ballots, caucuses all take place out in the open: People show up to their precinct and physically move into designated parts of a room to show their preference for a certain candidate. Delegates are awarded based on those who reaches a certain threshold of support by the end of the night.

New rules and procedures will change how the caucuses are conducted and what is reported. Make no mistake: the Iowa caucuses, like all primary contests, are about earning the most pledged delegates that vote during the Democratic National Convention this July in Milwaukee.

On caucus night, the Iowa Democratic Party will report three numbers, including the "state delegate equivalent" results, which is used to calculate the number of national delegates each candidate receives; those delegates will go to the national convention.

CNN will project the winner of Iowa based on the candidate who receives the most state delegate equivalents.

This year, a Democratic candidate needs 1,991 pledged delegate votes to win the party's nomination on the first ballot of the convention. Though Iowa's 41 don't seem like a lot comparatively, their votes can reflect or create the momentum that can alter the course of history (see: Barack Obama in 2008).

How to win in Iowa and beyond

A new rule by the Democratic National Committee mandates that all delegates elected to the national convention reflect the vote of the first determining step of the process -- the precinct caucuses. This simplified process will make calculating the delegates, and therefore determining the winner, simpler.

For the first time, the state party will also release the results of the first and final preference votes (more on that below) alongside the state delegate equivalents, but like the popular vote's relation to the Electoral College, the delegates will ultimately reflect who's in the top spot.

How do the Iowa caucuses work

At 7 p.m. CT on February 3, all 1,678 precinct locations will shut their doors to start voting. As they begin, neighbors will hear messages from the state party chair, local officials and possibly campaign representatives. They will then show their first preference for president.

Voters will split up into different sections of the room dedicated to their presidential candidate of choice. Typically, a candidate needs 15% of the vote to remain viable, as determined by the amount of people participating in the precinct location. Smaller locations may have different viability thresholds.

If a candidate is not viable, their voters can realign to another viable candidate or join together to create a group in support of another candidate that meets the threshold.

In a change from previous cycles, voters who select a viable candidate for their initial preference will not be allowed realign. In fact, they will be given a presidential preference card to write their choice down to create a paper trail in case a recount is requested.

This rule change by the state party seeks to accelerate and streamline the process.

Those voters in support of a viable candidate can hand in their cards and leave after the first expression and still be counted in subsequent votes.

Can't make it to the caucuses? No problem.

Caucuses previously required voters to participate at a singular time and location. As part of the DNC's post-2016 reforms, states holding caucuses are required to provide a way to participate outside the one designated time and place.

This year, the state party has approved 97 "satellite caucuses." Following the same structure as a regular caucus, satellite caucuses will take place on February 3 at different times and locations than the regular precinct caucuses. The change was made to accommodate participants who might not be able to make their regularly scheduled vote due to work, accessibility, family obligations or other reasons.

Virtual caucusing was part of the original plan for 2020, which would have given Iowans the opportunity to vote by phone on specific days leading up to the regular caucuses. The DNC did not approve the plan due to security concerns, so the state party expanded their satellite caucus option they provided in 2016 for members of the military and those with mobility access issues.

Who participates in the caucuses?

Iowa caucuses, in-state and out-of-state, are open to registered Iowa voters. A voter must be at least 18 years old on November 3, 2020, to participate in the caucuses.

Though the party requires everyone to be a registered Democrat, in-state voters can register at their precinct location before the vote. Out-of-state attendees will have to pre-register with the party to verify eligibility.

Delegates: Who they are and how to become one

The precinct caucuses will elect county delegates to county conventions. There, district delegates will be elected to the state convention, who will then go on to select the national delegates.

Delegates are voters from each locality who represent their presidential candidate of choice. Any voter can run for a delegate slot, but they will have to eventually be approved by the candidate's campaign they are representing to ensure voters' picks are reflected through Milwaukee.

As the name implies, "pledged delegates" are pledge on the first ballot of the national convention only (technically, they can change their vote, but given that campaigns approve them, it is unusual for that to occur). If the convention goes to a second ballot, they are no longer obligated to vote for any specific candidate.

Recanvasses and recounts are required to be available to candidates if they can demonstrate that the result could alter the national delegate allocation. Requests for either must be received by the state party on February 7, 2020 at 12:00 p.m.

New Hampshire is just eight days after Iowa. Candidates will typically head straight to the Granite State for more handshakes, rallies, and delegate scavenging in New England and beyond.