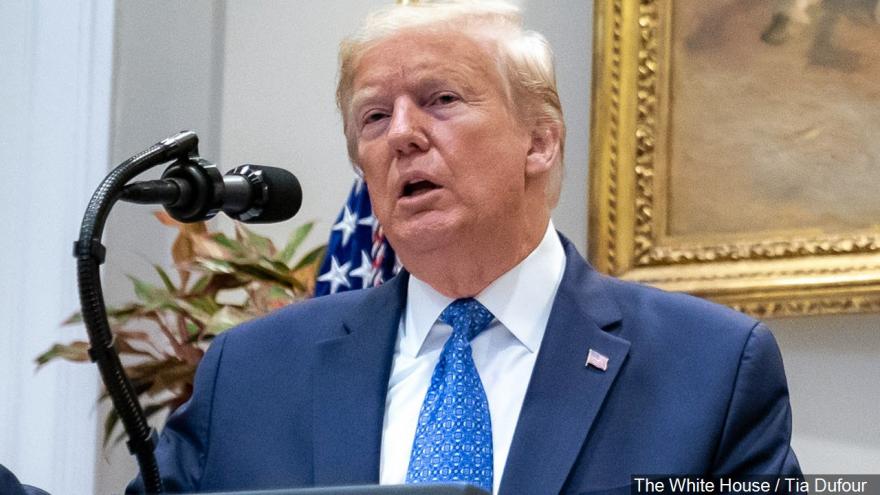 (CNN) -- Iran has issued an arrest warrant for US President Donald Trump over the drone strike that killed a top Iranian general in January, the semi-official Fars news agency reported Monday.

Trump is one of 36 people Iran has issued arrest warrants for in relation to the death of Qasem Soleimani, commander of the Islamic Revolution Guard Corps (IRGC), according to Fars, but the Tehran attorney general Ali Alqasi Mehr said Trump was at the top of the list.

Mehr claimed Trump would be prosecuted as soon as he stands down presidency after his term ends, Fars reported.

Iran also said it had asked Interpol to issue a Red Notice for these 36 individuals, semi-official state news agency ISNA reported, though it was unlikely that Interpol would grant the request.

In a statement to CNN, Interpol said it "would not consider requests of this nature." It explained that it was not in accordance with its rules and constitution, which states "it is strictly forbidden for the organization to undertake any intervention or activities of a political, military, religious or racial character."

US Special Representative for Iran Brian Hook called the move a "political stunt" during a joint press conference with the Saudi Minister of State for Foreign Affairs Adel al-Jubeir on Monday.

"It's propaganda that we're used to," Hook said. "This has nothing to do with national security, international peace or promoting stability, so we see it for what it is -- it's a propaganda stunt that no one takes seriously and makes the Iranians look foolish," he added.

Soleimani was killed in a US drone strike at Baghdad International Airport in January along with five others, including Abu Mahdi al-Muhandis, the deputy head of the Iran-backed Iraqi Popular Mobilization Forces (PMF).

The strike, condemned by Iran and its allies as an "assassination," raised the specter of further regional destabilization.

A spokesman for Iran's judiciary, Gholam-Hossein Esmaili, announced in early June that an Iranian citizen had been sentenced to death for allegedly working for foreign intelligence agencies. Esmaili claimed that Seyed Mahmoud Mousavi Majd disclosed the whereabouts of Soleimani to US intelligence officials.

The Trump administration viewed Soleimani as a ruthless killer, and the President told reporters in January that the general should have been taken out by previous presidents.

The Pentagon blamed Soleimani for the deaths of hundreds of Americans and US allies in the months leading up to his killing.

"General Soleimani was actively developing plans to attack American diplomats and service members in Iraq and throughout the region," the Pentagon said at the time, calling the strike "decisive defensive" action aimed at deterring future Iranian attacks.