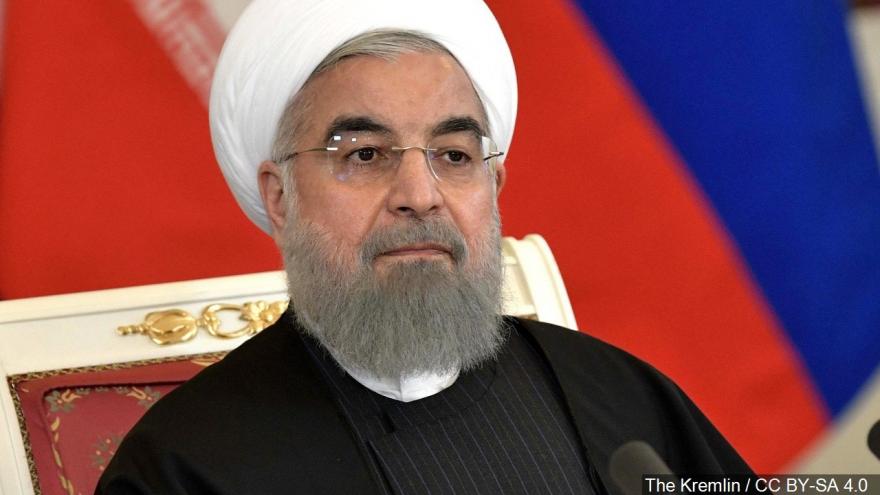 (CNN) -- Iran will take another step away from its landmark nuclear accord with world powers, President Hassan Rouhani said on Tuesday, announcing that the country would begin injecting uranium gas into 1,044 centrifuges that had been spinning empty at its Fordow plant.

Injecting the gas is part of the process to enrich uranium, which could ultimately be used to develop a nuclear weapon, though Iran has repeatedly denied it has any ambitions of building a bomb.

The move marks a significant break from the terms of the 2015 accord, known as the Joint Comprehensive Plan of Action (JCPOA). Under the deal, Iran was limited to operating around 5,000 older-model centrifuges.

"Iran will begin gas injection into the Fordow centrifuges as of tomorrow," Rouhani announced in a televised address Tuesday, according to state-run IRNA news agency.

It is the latest in a string of steps Iran has taken to exceed limits on its nuclear program set out by the deal, since President Donald Trump unilaterally pulled America out of the accord last year and reimposed crippling economic sanctions on Tehran.

The announcement came a day after Iran said it had launched 30 new advanced IR-6 centrifuges, doubling the number of those centrifuges in use, according to Iranian nuclear chief Ali Akbar Salehi.

"Presently, there are around 60 IR-6 centrifuges, producing 600 SWU of energy," Salehi told state television IRIB on Monday. "We did not plan to operate the 30 chains within three or four years, but we were asked by Iranian senior officials to take the challenge and put the chain online to show the power and capability of the Islamic Republic."

Under the terms of the nuclear deal, Iran had committed to not using these advanced centrifuges to enrich uranium until late 2023, when it would be able to begin testing up to 30.

The Iranian President stressed that the move Tuesday, and the steps leading up to it, were reversible, but only if the remaining signatories -- China, France, Germany, Russia, Britain and the EU -- offer a way to alleviate the chokehold that American sanctions have placed on its banking and oil sectors.

"Iran's fourth step, like the three previous ones, will be revocable if it sees other parties comply with the deal," Rouhani said, according to IRNA.

Rouhani added that the new activities would be monitored by the International Atomic Agency's (IAEA), the UN nuclear watchdog overseeing Iran's compliance with the deal. There was no immediate reaction from IAEA.

Vakil said Tehran's moves this week were a calculated attempt to pressure Europe. "Iran's strategy is picking areas where it can reverse ... It's being incremental and calculated because it doesn't want to provoke too much of a reaction from Europe," Vakil said. "It needs a face-saving solution and that is what it is looking for."

Tehran has gradually scaled back its commitments to the nuclear deal after President Trump withdrew from the pact in 2018 and reimposed economic sanctions on Iran.

US sanctions have crippled Iran's economy, causing the nation's currency to plummet and prices to soar. As a result, the economy has contracted and food and medical shortages are rampant.

Iran announced in July that its stockpiles of enriched low-grade uranium had exceeded the 300-kilogram limit set in the deal. President Rouhani later confirmed in September that the nation was using advanced models of centrifuges to enrich uranium.

The nuclear deal was intended to limit Iran's civilian nuclear program and prevent it from developing nuclear weapons.

Iranian Foreign Minister Javad Zarif has insisted in the past that Iran is not in violation of the nuclear deal, because the US was the first to walk out on it.

The announcement Monday that Iran would double its advanced centrifuges coincided with the 40th anniversary of the US embassy siege -- when Iranian students took 90 people hostage, including 66 Americans.

Iranians celebrated the anniversary with rallies across the country and chants of "death to America," state media said.