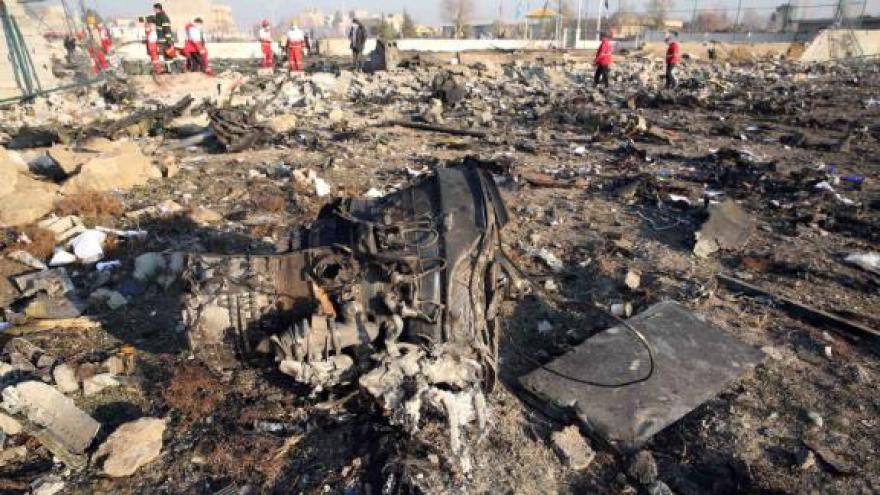 (CNN) -- Iran admitted Saturday that it mistakenly shot down a Ukrainian passenger jet, blaming human error and "US adventurism" for the crash that left 176 people dead.

In a statement, the nation's armed forces said it targeted the passenger plane unintentionally. It attributed the crash to radar activity and fear of US action.

"The Islamic Republic of Iran deeply regrets this disastrous mistake. My thoughts and prayers go to all the mourning families," Iranian President Hassan Rouhani said.

After the missile operation in Iraq, US military flights around Iranian borders increased and Iranian military officials reported seeing aerial targets coming toward strategic centers, according to a statement by Iranian armed forces headquarters.

"The aircraft came close to a sensitive IRGC military center at an altitude and flight condition that resembled hostile targeting. Under these circumstances, the aircraft was unintentionally hit, which unfortunately resulted in death of the many Iranian and foreign nationals," the statement reads.

Those responsible will be prosecuted

Following Iran's announcement, Ukrainian President Volodymyr Zelensky called on Iran to provide a "full admission of guilt," in a statement posted on his official Facebook page.

"We expect that Iran assures its readiness to have a full and open investigation, bring those responsible to justice, return of the bodies of the deceased, pay compensations, issues official apologies through diplomatic channels," the statement said.

Rouhani said in a statement released by his office Saturday that those responsible for taking down the plane will be prosecuted.

"Further investigation is needed to identify all the causes and roots of this tragedy and prosecute the perpetrators of this unforgivable mistake and inform the honorable people of Iran and the families of the victims about it," Rouhani said.

"It is also necessary to adopt the required arrangements and measures to address the weaknesses of the country's defense systems to make sure such a disaster is never repeated," he added.

Iran had previously denied US claims that the country had struck down the plane accidentally.

A US official familiar with the intelligence said the aircraft was downed by two Russian-made SA-15 surface-to-air missiles. The US saw Iranian radar signals lock onto the jetliner before it was shot down.

"No one will assume responsibility for such a big lie once it is known that the claim had been fraudulent," government spokesman Ali Rabiei said in a statement earlier Friday, according to state-run Press TV.

Iranian authorities are in possession of the two flight data recorders, also known as black boxes, which Ukrainian investigators got access to Friday. They have yet to start examining the information, but have said it included communications between the pilot and Tehran flight control.

Tensions between the US and Iran escalated last week after US President Donald Trump ordered a precision strike that killed Iranian commander Qasem Soleimani.

Soleimani was plotting "imminent and sinister attacks" on Americans, Trump said, adding that the action was taken to stop a war.

The Pentagon blamed Soleimani and his Quds Force for attacks on coalition bases in Iraq in recent months, including the December 27 strike that killed an American contractor and Iraqi personnel. He was also blamed for the US Embassy attack in Baghdad on December 31. The Pentagon said in addition to the hundreds killed in his time as a commander, thousands more were wounded.

Tensions between the US and Iran have complicated the investigation. US government investigators, for example, cannot fly into Tehran and meet with government officials without a license. That prohibition is due to longstanding sanctions rather than the most recent events, according to two US officials who spoke on the condition of anonymity.