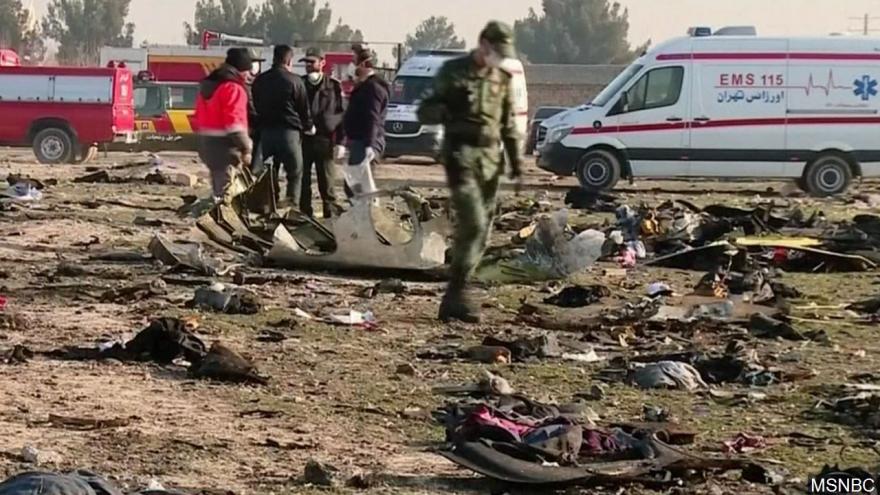 (CNN) -- A spokesman for the Iranian government said reports that missiles downed the Ukraine International Airlines flight that crashed near Tehran Wednesday are "a big lie," state-run media reported.

The spokesman, Ali Rabiei, accused the United States of spreading misinformation about the crash, in which all 176 people on board were killed.

"No one will assume responsibility for such a big lie once it is known that the claim had been fraudulent," Rabiei said in a statement, according to Press TV.

"It is unfortunate that the psychological operation of the US government, and those supporting it knowingly and unknowingly, are adding insult to the injury of the bereaved families and victimizing them for certain goals by propagating such fallacies."

The plane, a Boeing 737-800, was headed for Kiev when it crashed shortly after takeoff from Imam Khomeini Airport in the Iranian capital. The victims include 82 Iranians, 63 Canadians, 11 Ukrainians, 10 Swedes, four Afghans, three Germans and three British nationals.

Reports from the United States and its allies surfaced Thursday that the plane may have been shot down by surface-to-air missiles.

British Prime Minister Boris Johnson and his Canadian counterpart, Justin Trudeau, said Thursday that intelligence showed the commercial aircraft was shot down. Both leaders said it may have been unintentional and called for an investigation.

A US official familiar with the intelligence said the plane was shot down by two Russian-made SA-15 surface-to-air missiles. The US saw Iranian radar signals lock onto the jetliner, before it was shot down. Video sent to CNN appears to show a missile fired into the Tehran sky early Wednesday morning and striking an object in the sky.

Ali Abedzadeh, the head of Iran's Civil Aviation Organization, said the plane's black boxes -- which may contain data that would help investigators figure out what caused the crash -- were damaged, so Tehran may need help decoding them.

Abedzadeh also cast doubt on conclusions the plane was shot down. "If a rocket or missile hits a plane, it will free fall," he told CNN.

The timing of the crash, which was initially blamed on mechanical failure in Iranian state media, came just hours after Iran fired missiles at two Iraqi bases housing US troops in retaliation for the killing of Qasem Soleimani, who was one of Iran's most powerful and influential military leaders.

The exchange of attacks between Tehran and Washington -- both on Iraqi soil -- marked a dramatic escalation of tensions between the adversaries and raised fears of another proxy war in the Middle East.

Trump said in a statement Wednesday the strikes appeared to be the extent of Iran's actions, but he also pledged more to enact more sanctions on the country.