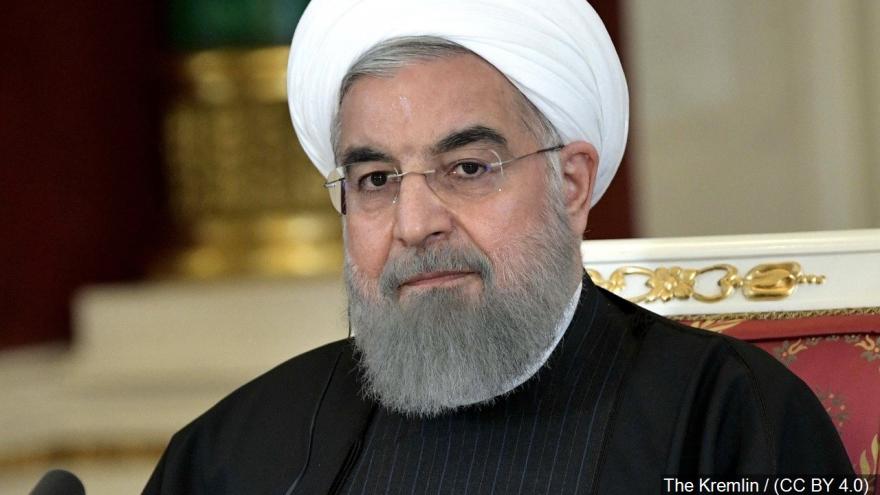 (CNN) -- Iranian President Hassan Rouhani said Saturday the United States committed a "grave mistake" in killing Iranian commander Qasem Soleimani and that Americans "will face the consequences of this criminal act not only today, but also in the coming years."

His remarks came on the same day mourners in neighboring Iraq were chanting "Death to America" at a funeral procession for Soleimani and an Iraqi militia leader who died with him in a US airstrike in Iraq early Friday.

"The Americans did not understand what grave mistake they committed," Rouhani said while visiting the house of Soleimani's family in Tehran, according to a statement his office released.

Iranian Foreign Minister Javad Zarif seemed to suggest a goal of any Iranian retaliation, tweeting Saturday: "End of US malign presence in West Asia has begun."

The strike killed Soleimani, head of Iran's Quds Force, at Baghdad International Airport, along with Abu Mahdi al-Muhandis, deputy head of the Iran-backed Iraqi Popular Mobilization Forces. At least six people were killed in the strike, an Iraqi security source told CNN on condition of anonymity.

It marks a major escalation in regional tensions that have pitted Tehran against Washington and its allies in the Middle East.

President Donald Trump on Friday said he ordered the death of Soleimani, one of Iran's most powerful men, to stop a war, not start one, as tensions between the two nations were already escalating.

The Pentagon blamed Soleimani and Iran-backed Iraqi militias for recent assaults on coalition bases in Iraq, including a December 27 strike that culminated in the deaths of an American contractor and Iraqi personnel.

After retaliatory US airstrikes against the militias last month, hundreds of protesters stormed the US Embassy compound in Baghdad on December 31 -- an attack the US also blamed on Soleimani.

After the embassy attack, the US sent to the Middle East 750 troops from the Immediate Response Force of the 82nd Airborne Division. On Friday, the US announced it was sending the rest of the brigade, putting the number of US service members deployed there this week close to 3,500.

Soleimani was the head of the Islamic Revolutionary Guards Corps (IRGC) Quds Force and became the architect of Tehran's proxy conflicts in the Middle East. The Pentagon blamed Soleimani for hundreds of deaths of Americans and their allies over the years.

Rockets hit parts of Baghdad on Saturday, including the parade grounds in Baghdad's fortified Green Zone and the Al-Jadriya area just south of the Green Zone, injuring no one, the Iraqi army said. The Green Zone contains Parliament, ministries and foreign embassies, including that of the US.

Rockets on Saturday also targeted Balad Air Base, which houses US and Iraqi forces and contractors, the Iraqi army said. No injuries were reported.

It wasn't immediately clear who fired the rockets. It's not uncommon for rockets to be fired at US positions in Iraq.

Iran says it will fight back

During Rouhani's visit with Soleimani's family Saturday, Soleimani's daughter asked him: "Who will take revenge for my father?"

"Everyone will take revenge," he replied, in video aired by Iranian state television.

Iran's Supreme Leader, Ayatollah Ali Khamenei, has vowed "harsh revenge," according to a statement on his official website.

"His pure blood was shed in the hands of the most depraved of human beings," Khamenei said.

In a letter to the United Nations, Iran described the attack as state terrorism and an unlawful criminal act. European officials and the UN have called for de-escalation.

It was "tantamount to opening a war," Majid Takht Ravanchi, Iran's ambassador to the UN, told CNN's "Erin Burnett OutFront" on Friday. He said the strike had escalated a war that started when the US pulled out of a nuclear deal with Tehran in 2018.

Maj. Gen. Ismail Qaani, who served for years alongside Soleimani, has been appointed his replacement.

Secretary of State Mike Pompeo, like Trump, has said the strike had thwarted an "imminent" attack in the region but declined to give details.

Some Democratic lawmakers have said they weren't yet convinced the strike was merited. US Sen. Chris Van Hollen, D-Maryland, said Friday one of his representatives attended a classified briefing, and "nothing that came out of the briefing changed my view that this was an unnecessary escalation of the situation in Iraq and Iran."

He said the strike will increase threats to US interests.

The Trump administration has warned members of Congress that Iran is expected to retaliate against the US within weeks for the strike. US authorities are increasing vigilance and fortifying defenses.

In Iraq's capital on Saturday, thousands of people attended a funeral procession, mourning Soleimani and al-Muhandis as they chanted "Death to America."

Mourners wept as they walked alongside the vehicle carrying his coffin down the streets of Baghdad. Some carried signs that read, "We are all Muhandis and Soleimani."

Iraqi Prime Minister Adil Abdul Mahdi was among the crowd of mourners walking next to the cars carrying the coffins.

Some women carrying flags of the Iraqi Popular Mobilization Forces -- the forces al-Muhandis commanded -- erupted into tears when the slain commanders were mentioned. Many mourners said the attack strengthened their resolve to expel US forces from Iraq.

"This strike killed our heroes, but it created a thousand more Hajji Soleimanis and Muhandises," said Assifa Abbas, 50, a mother of three PMF fighters. "If Parliament doesn't vote to expel US troops, they will see the true face of the Iraqi street."

Abbas walked in the procession with an image of al-Muhandis and Soleimani taped on her black chador. She said she would refuse to allow her sons back into her house until they pushed the "last American" from Iraq.

Former Parliament member Fawzi Akram, from Iraq's Turkmen ethnic minority, predicted the attack would end US dominance in the country. "The map of a new Iraq will be drawn with the blood of these martyrs," Akram said.

Mourner Mohammad al-Fadli said the assassinations came as an "indescribable shock." "These are the people who got rid of ISIS for us," al-Fadli said.

The PMF -- Shia militia first mobilized in 2013 to confront the advance of ISIS -- were key ground forces in the early days of an offensive to push ISIS out Iraq, eventually recapturing several towns from the extremist group. Soleimani was reported to be on the ground directing battles against ISIS in Iraq, as well as Syria.

Iraq's anti-corruption demonstrators also aren't happy about the US strike

In another part of Baghdad, some anti-government demonstrators have been demanding, among other things, an end to heavy-handed Iranian influence in Iraq. But many haven't been happy about the US strike.

Since the anti-corruption protests began in October, Iraqi security forces have tried to violently quash them, killing hundreds of demonstrators and wounding many more.

Still, people at Baghdad's main protest site, Tahrir Square, said Saturday that the US should not have conducted an attack on their soil.

"We are the people of Iraq. We don't want outsiders to rule us," protester Muthana Salman said.

Funeral services are scheduled in Iran on Sunday and Monday

After processions Saturday in Iraq, Soleimani's body will be transferred to Iran for funeral services Sunday in Mashhad and Monday in Tehran, Iranian state media reported.

Iran will observe three days of national mourning, with people also gathering in Baghdad on Saturday to pay tribute to all the officials killed.